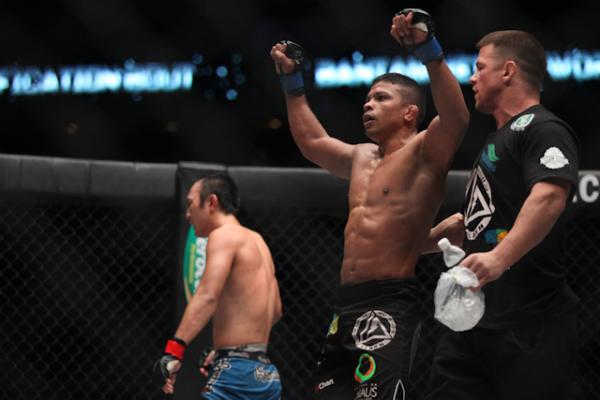 ONE Fighting Championship (ONE FC) has announced the main event for ONE FC: Warrior’s Way, which takes place on Dec. 5. Bibaiano Fernandes will put his ONE FC bantamweight title on the line in a bout with one of South Korea’s hottest bantamweights, Dae Hwan Kim. Also announced, former UFC star Brandon Vera will make his promotional debut when he takes on former Universal Reality Combat Championship heavyweight champion Igor Subora.

Fernandes will come into the fight riding an eight-fight winning streak that dates back to September 2011. In his most recent bout, he defeated Masakatsu Ueda by unanimous decision in May at ONE FC 15: Rise of Heroes. His opponent, Dae Hwan Kim, enters the fight undefeated through 10 fights with five wins coming by way of submission. In his last fight, Kim took on highly touted Filipino contender Kevin Belingon at ONE FC 14: War of Nations and came out the victor by rear-naked choke in the first round to become the No. 1 contender.

Vera will make his debut when he takes on Ukrainian heavyweight Subora. Vera last fought  in August 2013, when he took on Ben Rothwell in a losing effort at UFC 164. Vera, who is currently on a two-fight skid, will be looking to get back to his winning ways. Subora will seek to notch another win when he takes on Vera. The former URCC champ is riding a five-fight winning streak. In Subora’s last fight, he made quick work of his opponent, Marcus Valda, at URCC 24: Uprising, knocking out Valda in 27 seconds of the first round.

ONE FC: Warrior’s Way is scheduled to take place at the state-of-the-art MOA Arena in Manila, Philippines. “ONE Fighting Championship will hold nothing back as it returns for another night to remember,” stated ONE FC CEO Victor Cui.

The action will air live in Asia on Fox Sports 3. Fans outside of Asia can see the action online via live stream at www.onefc.com/livestream. The pay-per-view stream will be available for purchase for $9.99.