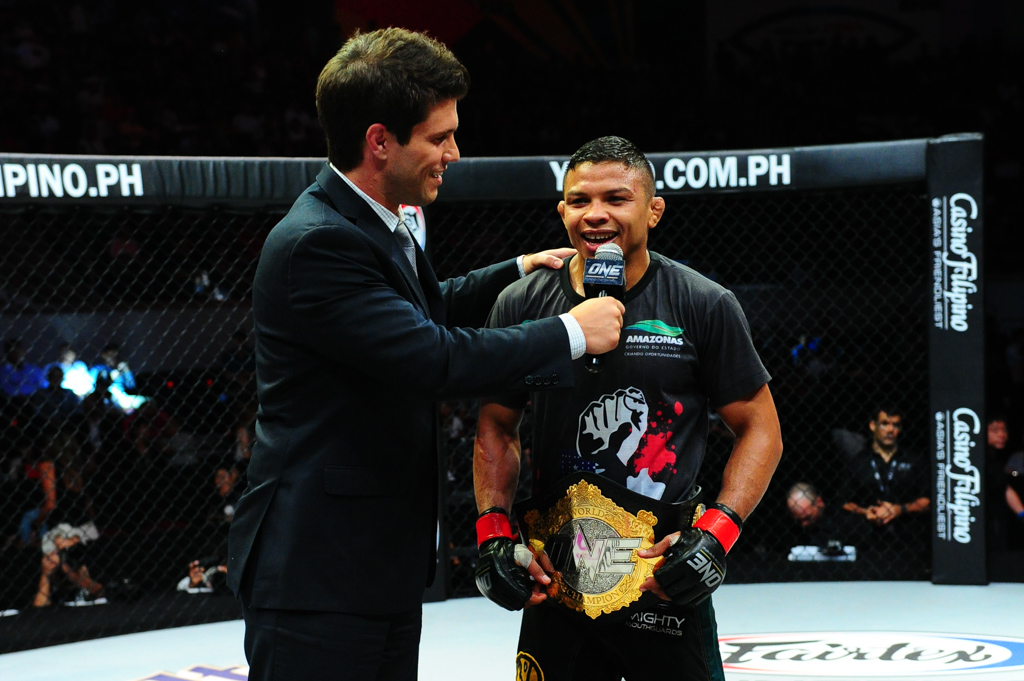 ONE on Prime Video 4’s Bibiano Fernandes: ‘When The Time Comes, The Warrior Shows Up’

Motivation is a subjective idea. It can come from many places, and occur in pretty much any living organism. Whether it’s a vine growing up a wall to get closer to the sunlight, a baby sea turtle marching across sand from its hatching spot to the ocean, or a person trying to fight for a better life, motivation can come in many forms.

Bibiano Fernandes has been fighting for a long time, both inside and outside the world of martial arts. As a martial artist, he is a multiple-time Brazilian jiu-jitsu world champion, and a long reigning mixed martial arts world champion for both DREAM and ONE Championship. But, his fight started well before then. Fernandes is the youngest of six siblings. He has one older sister and four older brothers. Life growing up in Manaus, Brazil was not easy for them.

“I lost my mother when I was seven years old, and everything I did in my life was myself,” Fernandes told Combat Press. “People would guide me, and I would move forward. But everything I did in my life I worked hard for. I take care of myself. I’ve been smart. I tried to be knowledgeable. I tried to learn about finance. I tried learning about a lot of stuff. That’s why I’m the way I am today. I motivated myself.”

Now, at 42 years old and holding a fifth-degree black belt in BJJ, Fernandes is still fighting as a professional mixed martial artist. His wife is unable to work, and they have three sons. He does everything he can to provide for his family, both immediate and extended, including his siblings back in Brazil. His motivation does not come from necessity, as much as it does from his willingess to help anyone who needs it.

“I choose to fight, because I can still inspire people, and they still can watch special people,” Fernandes said. “Sometimes people text me, ‘Bibiano, thank you so much. You still inspire me.’ Like, if I can do it, they can do it. That’s the reason I still keep it going. It’s not because I just want to fight, but every fighter has a message for somebody. Everybody needs something, you know? Maybe somebody needs some motivation. Maybe somebody is going through something in life. Maybe somebody lost their job. Maybe somebody does not have any money to pay. Life is hard, and we need to keep it moving forward. That’s why I keep it going. I always have a message.”

The fighting career of Fernandes has been nothing short of spectacular. After racking up a stack of gold medals in IBJJF Pan American and World Championships, he had his sophomore MMA outing against Urijah Faber in King of the Cage in Oct. 2006. In the 2009 DREAM featherweight grand prix, he beat Masakazu Imanari and Joe Warren in quarterfinal and semifinal bouts, respectively. And, in 2013, he won the interim ONE Championship bantamweight title, unified it later that year, and went on to defend it seven times over the following five years. He briefly lost his ONE belt to Kevin Belingon by split decision in late 2018, but he earned it back in a rematch and defended against Belingon in a trilogy fight.

After last defending his belt in Oct. 2019, the COVID pandemic struck, and Fernandes went without a fight for years. He was supposed to finally defend it against John Lineker in Dec. 2021, but the fight did not immediately happen due to the lingering effects of the pandemic.

Lineker and Fernandes finally faced off at ONE Championship: Lights Out in Mar. 2022. The fight was pretty back-and-forth until the latter part of Round 2, when Lineker clipped Fernandes with a left hook and stripped him of his title.

“I took two years before I went back to fight again,” explained Fernandes. “Going back after two years to fight John Lineker, the way I was in the beginning, I dropped him. When I dropped him, I was thinking I could have finished that guy if I had punched him more. But he hit me with the left hook again. I showed in that fight I have good power, but at the finish of the second round, he gave me a nice left hook, and that made me wonder where I was and I tried to recover. When I dropped him, he fell, and I rushed in, and that was my mistake. I dropped him, I rushed in for the fight, and he flipped me over and began punching me out. My timing and my motivation was not there. I had to go through a lot of stuff before, but the champion always has to go through a lot of stuff, you know?”

Fernandes, who lives in British Columbia, Canada, used to train a lot with Demetrious Johnson and Matt Hume at AMC Pankration in Kirkland, Wash. However, after the pandemic, he stopped trying to travel back and forth, and he has since put together his own camp in B.C. He has coaches he brings in, along with wrestlers, boxers, kickboxers, and everything else he needs to stay fight-ready.

“I believe everything in life is about discipline – my view and my own opinion – and how I can motivate myself,” said the former champ. “I have three kids at home. I have to work. I have to still pay my bills. I have to move forward. I have responsibilities. That changes the game. But, if I didn’t give a shit about anything, I wouldn’t be here to speak with you. I take life very seriously. It’s not because I’m scared to get old. I know my body will get old, but I can protect it, and I can make sure my mind is still sharp. What I learned about this is to train with young guys. If a young, hungry guy wants to train with me, that helps me too. For me, I don’t drink, I don’t smoke, and I think maybe that’s the key for me.”

Well, losing the belt to Lineker was not how Fernandes was expecting things to go. However, since 2006, there had not been a single calendar year that he went without a fight, let alone two in a row. So, 2020 and 2021 were not exactly great for his career, especially as he crossed the 40-year-old mark. But, to a guy like Fernandes, age is just a number, and he is still ready to keep pushing forward. He was supposed to have a couple different opponents, but finally, after eight months, he will be facing former BRAVE CF champ Stephen Loman at ONE on Prime Video 4 tomorrow night in Singapore.

“He’s a good fighter. He’s strong and quick, and that’s okay for me. I will be aware. John Lineker doesn’t have a ton of things. He just throws that punch everywhere, and you can see that punch coming. Stephen Loman, he can throw, but he moves more. John Lineker is one way. He comes straight to you. With this one, I stayed focused, I pushed my camp, and we will see who the best is.”

Loman trains out of Team Lakay in the Philippines, which is currently the country’s top MMA team. And, ONE Championship is stacked with Team Lakay fighters, including past and current champions, such as the aforementioned Belingon. Eduard Folayang, and Joshua Pacio. These guys are known for being hard hitters in the stand-up department, but are also very well-rounded in all aspects of MMA. Fernandes, however, has more experience than many of them combined, so not only is age not a factor in his battle with Loman, he knows he has what it takes to get past the 30-year-old, but he still has his sights set on the title, which Lineker lost by missing weight for his first title defense in October.

“I’ve been here for many years,” Fernandes elaborated. “I’ve seen a lot of stuff, and I’ve seen a lot of guys come and go. I’m still here. I’m still 42 years old. I’m here to motivate everybody – you know, come on guys, let’s keep it going. You can’t say, ‘I’m 42. I can’t do nothing.’ Fuck that. Don’t believe that shit. You need to motivate yourself and be thankful for whatever you have.

“I defended my belt for many years. What I did in ONE Championship, nobody else did. I wore my belt for a long time. I beat everybody.

Fernandes is a hard-working fighter, father, husband, and brother, and he has a huge heart. On Friday night, he will bring that heart back to the ONE Circle to face Loman. After an accidental groin strike by Fabricio Andrade ended Lineker’s last fight, those two are set to rematch for the bantamweight title in January. A big win over Loman should put Fernandes right in line to get another shot at getting his belt back, and he wants fans to know one thing.

“Bibiano’s a warrior,” said Fernandes. “When the time comes, the warrior shows up. I’m a warrior, I discipline myself, and I always go for a finish.”\

ONE on Prime Video 4 airs in its entirety live on Amazon Prime Video with the lead card starting at 8 p.m. ET, followed by the main card at 10 p.m. ET.