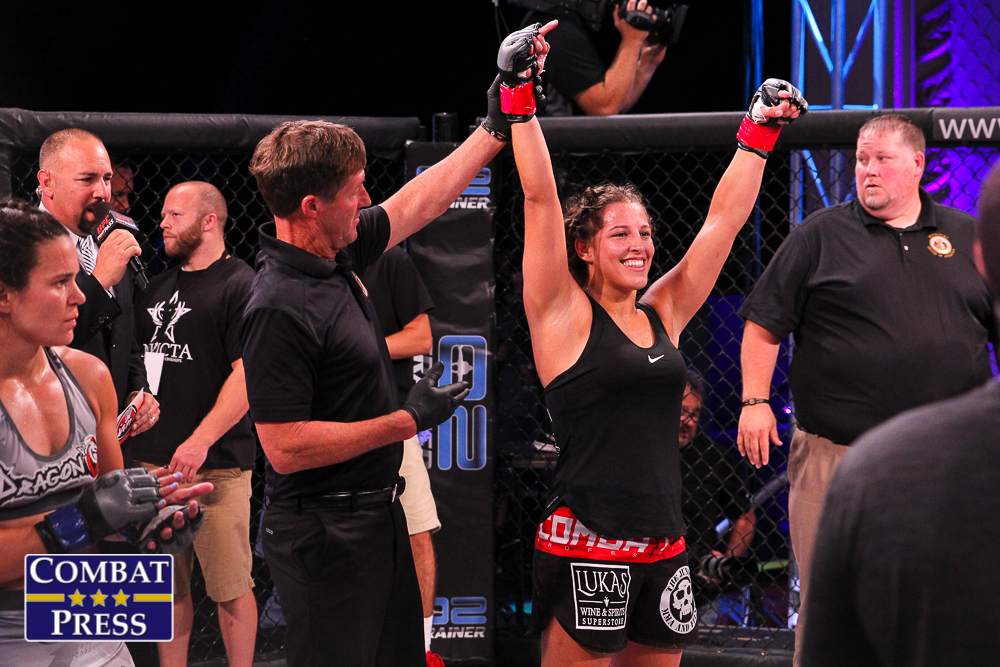 Let’s examine the women’s featherweight division, a weight class that is almost uninhabited in the UFC right now. There is a lack of depth in the division, but that does not mean the UFC shouldn’t start building it up.

The nickname “Cowboy” is synonymous with a few top-level MMA fighters, including the UFC’s Donald Cerrone and Alex Oliveira. Santana, known as “Cowboyzinha,” is quickly becoming one of the best female featherweight prospects in the world.

Under the guidance of the aforementioned Oliveira, Santana runs with Tata Fight Team, an underrated crew out of Brazil. Like her mentor, Santana is a scrappy striker with a good amount of power, even though two of her three pro wins have come by decision.

She took all three of those pro bouts in 2017 for the Watch Out Combat Show promotion in Brazil. She scored decision wins over Ana Costa and Heloisa Azevedo, but her most impressive showing was a first-round knockout of Alexandra de Cassia.

If Santana continues to maintain a busy schedule and continue her success, she’ll continue to be a presence on the map. The UFC featherweight division is basically made up of two or three fighters, so the company needs all the help it can get. Cowboyzinha would definitely fit that role.

Poland has produced some very strong female talent in MMA. From dominant former champion Joanna Jędrzejczyk to perennial contender Karolina Kowalkiewicz, the country is rapidly becoming one of the hottest spots in MMA. The country is also home to the little-known fighter Czech.

Czech is a Brazilian Jiu-Jitsu fighter known for her takedown abilities and nifty grappling. She also loves using ground strikes, which have led to two of her three victories. Her biggest career win came against UFC veteran Izabela Badurek in Czech’s 2013 pro debut.

The 5-foot-10 grappling ace did not fight in 2017, which may have hurt her momentum a bit. That reversed a 2016 in which Czech went 2-0-1, with a questionable majority draw at a Lithuanian regional show.

Czech needs to get back to being active. However, with her skill set and improvements, she could definitely compete with some of the world’s best 145-pounders.

Yes, this is a prospect’s series. Yes, it’s fairly undeniable that a 37-year-old longtime veteran is probably not a prospect. However, with how thin the featherweight division is right now and how few featherweights are actually in the UFC, we’ll take anybody we can get, including the Brazilian veteran Gomes.

Gomes debuted in 2007. She’s fought a who’s who of fighters, from former UFC champion Ronda Rousey to current champ Amanda Nunes. She’s a physical specimen with good strength and grappling, and she loves working her takedown game.

Gomes competed just once in 2017 to break a two-year hiatus for the Brazilian. She fought Pam Sorenson, another woman on this list, and scored a close split-decision victory over the American to reverse a two-fight skid she suffered while competing at a lower weight class.

Experience and skill are going to be key to any fighter getting signed to the UFC, even if it is in the almost unoccupied featherweight division. Gomes is somebody the organization could throw in there against Cristiane “Cyborg” Justino if it needed to give the champ a worthy opponent.

The lone American on this featherweight prospect list, Sorenson is a rugged competitor from the underrated fight state of Minnesota. The former King of the Cage champion has stepped into the spotlight via Invicta Fighting Championships, a great platform on which female fighters can gain exposure.

At just 5-foot-5, Sorenson is going to be one of the shorter featherweights out there. She makes up for this by being thick and powerful. She scores takedowns and muscles opponents from top position. While most of her wins are decisions, she does have finishes via strikes and submission. Her only two losses were close split decisions.

Sorenson did suffer one of those split-decision losses against Ediane Gomes to start off her 2017 campaign. However, she recovered with two wins to finish off her year. She scored a first-round submission over previously undefeated Ukrainian Helena Kolesnyk to get back on track before scoring a split-decision win over longtime MMA vet Jan Finney.

Sorenson has a resume of fighting some stiff competition, which makes her 7-2 record even more impressive. She could compete at bantamweight or featherweight, but she would be wise to join the UFC as a 145er. The division needs someone like her.

When women’s MMA fans think of Canadian featherweights, the name that immediately comes to mind is longtime vet Charmaine Tweet. However, there’s also a 27-year-old undefeated fighter who might come to the mind for Invicta fans. That would be Spencer.

Spencer has a Brazilian Jiu-Jitsu background, which makes sense given her fight style largely revolves around closing distance and mat work. She can throw hands a bit too, though it’s still a work in progress. She’s fought at both lightweight and featherweight, though, and she would have good size as a UFC featherweight. She’s also very powerful.

Spencer competed twice in 2017, scoring wins in both bouts under the Invicta banner. She started things off with a clear unanimous decision over Madison McElhaney. Then came a first-round choke finish of Amy Coleman.

Spencer gets right to work in 2018 with an Invicta bout against pro debutant Akeela al-Hameed in January. Another win, especially a finish, should be more than enough for the UFC to give her a call to fill the league’s barren featherweight ranks.