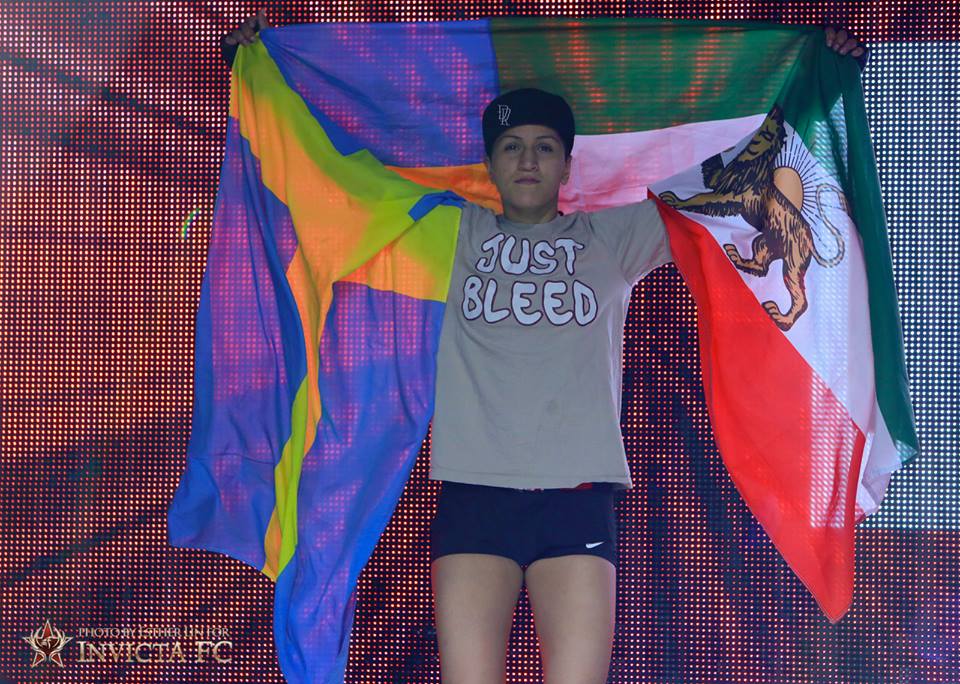 Stepping into an enclosed cage to fight another human being is not for the weak of heart or mind. For those that embrace it, the sport of mixed martial arts provides a fulfilling career.

This is a reality that 23-year-old bantamweight Pannie Kianzad knows firsthand. Born in Iran, Kianzad and her family moved to Sweden when she was very young. The youngest of four children, Kianzad was quickly drawn to competition.

“At some point, we all did martial arts, but I’m the only one that continued and has it as a profession,” said the fighter. “Of course, my mom wanted me to put my time in something else like my brothers and sister, but I think after 10 years, she gets it.

“I’m made to do this and this makes me happier than anything.”

The joy that Kianzad finds in the cage is a far cry from her initial experience in combat sports. At the age of 13, she picked up boxing and, over the course of her teen years, she had more than two dozen amateur bouts. Yet, she has no regrets over hanging up her boxing gloves.

“I didn’t box ’cause I wanted to; I did it for other people,” explained Kianzad. “I thought boxing was defining me as a person. No sport is defining you to be anything. It’s all about you.

“MMA made me like myself a bit more every day. And when you do find your team that supports you and loves you, you find more happiness.”

Kianzad’s support came in the form of Rumble Sports in Copenhagen, Denmark. Under the guidance of UFC veteran Mats Nilsson, she’s learned to recognize her skills. It has helped change her demeanor for the best.

“I literally thought I was trash and not worth any happiness on this earth,” Kianzad said of her early training in MMA. “My coach is helping me realize that it’s OK to take it all in and be proud. So when I can prove to myself that I am making it, it gives me a warm feeling.”

The term “making it” might be an understatement for Kianzad. Through eight professional outings, she’s yet to taste defeat in the cage. Along the way, she earned the Cage Warriors bantamweight title, one of the most prestigious belts in Europe. However, Kianzad isn’t letting the success go to her head.

“I know how it feels to be defeated,” revealed the Swede. “[I’ve] been in tough battles — three rounds and five. I think the biggest key is to always stay humble outside the cage and a beast inside it.”

In July, Kianzad made her Invicta FC debut in Las Vegas against Australia’s Jessica-Rose “Jessy Jess” Clark. She walked away with a clear-cut decision win after three rounds of action, but Kianzad was forced to overcome the nerves of competing in the United States for the first time.

“I cry a lot before my fights. It’s not out of sadness. I don’t really know what it is, but my tears just keep coming during warm-up,” said Kianzad. “I think it’s a good thing. Then I know I’m alive and ready to go.”

Nerves weren’t the only issue for the fighter on fight night. She had rolled her ankle on the day of the event.

“It was actually seconds before the fight,” acknowledged the fighter. “I just brushed it off. I had Jessy in front of me, so I couldn’t focus on that.”

Luckily, the ankle didn’t affect her performance in the cage. However, the fight did produce one of the more memorable moments of the year when Kianzad maneuvered to reverse mount and struck Clark with her backside.

“It’s not the first time I have ended up in a reversed mount. It’s like a special skill of mine. But the butt drop was a first,” she said with a laugh.

Kianzad’s win over Clark earned her a title shot against newly crowned champion Tonya Evinger at Invicta FC 14 on Sept. 12 in Kansas City, Mo. Now, she’ll look to add some new hardware to her trophy case.

“I never got to defend my belt in Cage Warriors, so it feels good to get a chance to prove myself once again,” said Kianzad. “It means a lot to me to fight for one of the biggest promotions in the world and get a chance to bring that bling home.”

The fight will be in hostile territory for the European fighter, as Evinger is a Missouri native and will have the crowd behind her.

“I love fighting in enemy territory, to be the underdog,” admitted Kianzad. “This is what we do, what we train for, what we desire. I work very hard for my fights and I know we will put on a show.”

Pannie would like to thank her team at Rumble Sports, her family, Fit4Fight, K.O Store, Dirty Rebel, MMAnytt, Massage Templet, Revolutionary Fitness Sweden, and all of her fans from all around the world. Follow her on Twitter: @PannieKianzad