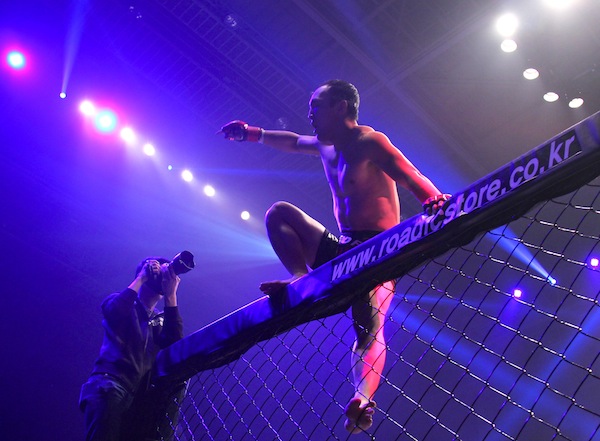 The headliner of Legacy Fighting Alliance’s ninth card provides prospect Danilo Marques with an excellent chance to prove himself against veteran light heavyweight Myron Dennis, but the real gem of this event is the chance to finally see rising women’s flyweight prospect Sabina Mazo compete on national television, via AXS TV, when she takes on Jamie Thorton in one of the night’s other featured contests.

Mazo, a Kings MMA and Muay Thai Medellin disciple, is still in the infancy of her pro career, but she’s made a big statement through her first two pro outings. In her pro debut, the “Colombian Queen” scored an upset over rising countrywoman Alejandra Lara, who entered the bout with an unblemished record through four fights. It was a hard-fought victory, but Mazo demonstrated her strength in the clinch, a dangerous submission attack and a stiff but effective striking arsenal. The 20-year-old’s second victory came against eight-fight veteran Reina Cordoba, who also entered the cage with a perfect record before dropping a split verdict to Mazo. The young fighter has not seen action since late 2015, though, so ring rust could be a factor.

After Mazo’s wins over undefeateds Lara and Cordoba, the 4-2 Thorton might seem like a step down in competition for the Colombian up-and-comer. The American fighter has indeed suffered two losses, but the defeats came against Katy Collins, who was a 4-1 prospect when they met, and Bárbara Acioly, who was spotless through three fights before submitting Thorton. The “Pretty Assassin” has defeated all other opponents put in front of her. Win or lose, she’s never been out of the first round. Three of her victories came via submission, while the other was a 38-second knockout. Two of her submission wins ended in less than one minute. While she may not hold a perfect mark, she can be a lethal foe, especially early in the fight.

Mazo isn’t a dominant fighter who runs away with the victory. Her first two fights were very close affairs. However, she has a solid skill set that encompasses the ground game and the stand-up. Her biggest weakness is in defending against takedowns where her opponent changes levels and shoots in. Mazo tends to immediately tumble to the mat in this scenario, but she never stops working from the bottom position. She attacked both Lara and Cordoba with triangle chokes from the bottom, and even took Cordoba’s back after Cordoba landed a perfectly timed takedown in the second frame of their fight. If an opponent doesn’t change levels effectively, Mazo is much better at defending the takedown and turning it in her favor, as she did to Cordoba in round three of their fight. At 5-foot-7, Mazo has a very lanky frame and long reach that made her appear to have a distinct size advantage against her opponents, even over the similarly tall Lara.

Thorton has a decent level change and a relentless attack, but her aggressiveness can get her in trouble. Case in point, the Acioly fight. Thorton was arguably winning the first round up until she charged forward for a takedown and ended up landing right in a triangle for the tap. Thorton has excellent in-and-out movement when delivering her punches, and she tagged Acioly hard on numerous occasions. She’s a whirlwind for one round — remember, we’ve never seen her go longer — and a lot will depend on how Mazo handles this constant pressure. Mazo was very composed against Lara and Cordoba, both of whom also came right at her, so there’s little doubt she’ll show up against Thorton, too. If Mazo takes Thorton into deeper waters, the American could fade.

Thorton might deliver plenty of punches that hit their mark against Mazo, but Mazo has already demonstrated an affinity for the triangle choke and Thorton tends to charge forward a little recklessly. This makes the perfect recipe for Mazo’s first stoppage victory. Given Thorton’s penchant for finishing or being finished in the first stanza, this fight probably won’t make it beyond five minutes.

Soo Chul is the more known fighter of this pair. The 25-year-old has posted a rather impressive resume since his 2010 debut, but it wasn’t all celebrations. Soo Chul went just 4-4 through his first eight fights, but his losses came against the likes of Andrew Leone, Leandro Issa, Gustavo Falciroli and Je Hoon Moon. Outside of this stretch, he has only suffered one loss, which came against elite bantamweight Bibiano Fernandes, and fought to a draw with accomplished veteran Marlon Sandro. Meanwhile, he defeated the likes of prospect Kevin Belingon, the aforementioned Issa (for ONE’s bantamweight crown), UFC veteran Motonobu Tezuka, the previously undefeated Maike Linhares, UFC castoffs Marcus Brimage and Tuerxun Jumabieke, and veteran Japanese competitor Shunichi Shimizu. The Team Force export has five wins by strikes and five victories via submission. He has suffered two submission defeats, but he even went the distance with heralded grappler Fernandes.

Min Woo has yet to compile such a solid record. The 23-year-old debuted in 2011 and picked up five straight wins, but none of his opponents held a winning record. Then, he suffered a majority decision loss to the aforementioned Moon. Min Woo has bounced back nicely to score victories over veterans Shoko Sato and Yuta Nezu while also avenging his loss with a decision nod over Moon. The MMA Story product has three victories by way of strikes and one submission finish.

While Min Woo has some decent victories, he doesn’t appear to be in the same league with Soo Chul, a former Rising On and ONE Championship bantamweight titleholder. Soo Chul has gone the distance with top fighters like Fernandes and Sandro, so he won’t be an easy challenge for Min Woo. Soo Chul should add to his trophy case with a win over Min Woo.

Russian promotions have leapfrogged their British, Asian and Brazilian brethren when it comes to top regional offerings. The Absolute Championship Berkut organization has played a large part in this evolving landscape. In the promotion’s 57th effort, the company combines established fighters like Vyacheslav Vasilevsky and Alexander Sarnavskiy with up-and-comers like Abdul-Aziz Abdulvakhabov and the night’s two headliners, ACB bantamweight kingpin Magomed Magomedov and challenger Petr Yan.

This isn’t the first time the two men have met, but the roles were reversed when they last clashed. Then, it was Yan as the champion and Magomedov as the challenger. Magomedov, now 25, won the interim ACB bantamweight title in that March 2016 affair when he eked out a split decision over the younger Yan. After a failed attempt at booking a rematch, ACB paired Magomedov with Oleg Borisov for his first title defense. Magomedov submitted Borisov to retain the title and clear the way for a second meeting with Yan. In the meantime, Yan topped Ed Arthur to cement his claim to a title shot.

Magomedov has been competing professionally for several years longer than his opponent. “Tiger” made his debut in 2011 under the M-1 Global banner and picked up a victory. He stumbled in his sophomore appearance, but he has been perfect ever since. The DagFighter product has notched notable wins over veterans Yuri Maia, Paata Robakidze and Bruno Dias in addition to his wins over Yan and Borisov. He has four wins by way of knockout and decision, and he has submitted five additional opponents. Magomedov, who was signed to the World Series of Fighting in 2015 but has never fought for the promotion, has a mix of Sanda, kick-jitsu and wrestling in his arsenal.

The 24-year-old Yan debuted in 2014 and worked his way to the championship in 2015 with victories over veteran Renato Velame in the quarterfinals, newcomer Kharon Orzumiev in the semis and fellow prospect Murad Kalamov in the finals. “No Mercy” has two victories by way of strikes and one win via submission.
He has put together an impressive resume in a short time, but the Tiger Muay Thai and Russia Top Team fighter has trended toward stoppage victories against inexperienced opponents while going the distance with the veterans he has met, including the aforementioned Magomedov and Arthur.

Their first fight was a grueling five-round affair. Magomedov relied heavily on takedowns and top control, whereas Yan scored points with his stand-up and submission attempts. Yan even had Magomedov mounted at one point, but he couldn’t capitalize on the position.

Yan — or his coaches — should have spent a great deal of time studying the tape of the ACB 32 fight. Magomedov made plenty of mistakes, but Yan never was able to take advantage. Magomedov had a tendency to shoot low and hug Yan’s lower leg when hunting for takedowns. Yan did manage to reverse one of these takedown attempts into an eventual mount situation, but he too often let Magomedov off the hook. Yan also failed to succeed with his submission attempts. Furthermore, he let Magomedov ride his back on too many occasions. Yan needs to shore up these areas of his game if he wants to avenge his title loss to Magomedov. If Yan hasn’t improved in these areas, he’s going to lose the same type of close, back-and-forth fight this weekend.