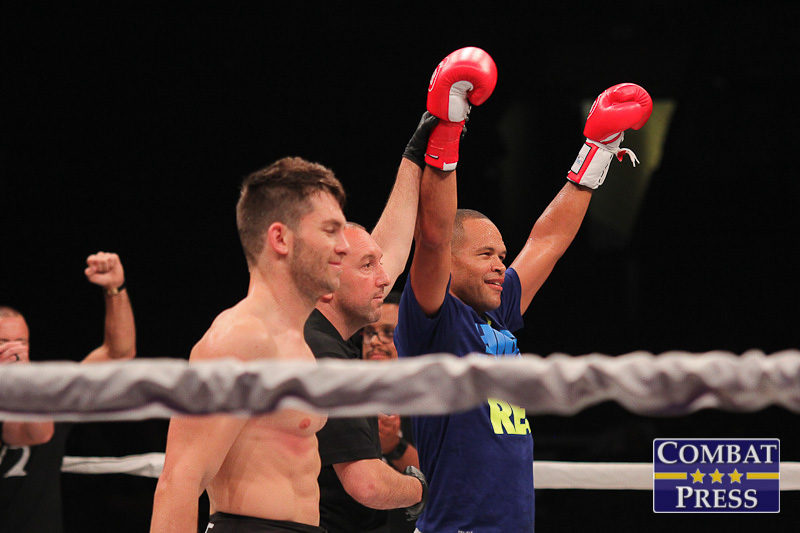 Bellator 238’s Raymond Daniels: ‘Like a Kid in a Candy Store’

In life, there are no do-overs. Regret is one of the worst feelings, so it is important to take advantage of opportunities as they present themselves.

In his professional career, Raymond Daniels has little regret. The high-level black belt in three major striking arts started his professional kickboxing career with 19 wins in a row in just two years and three months. He was so successful by early June 2008 that he tried his hand at pro MMA at the end of that month. However, a lack of preparation led to his first professional combat loss.

“When I went in there all those years ago, I was a young man,” Daniels told Combat Press. “I was an undefeated fighter at the time. I was knocking everybody out. I’d never taken a training session in wrestling or jiu-jitsu. I was this stand-up karate and kickboxing guy, and I thought I was just going to go out there and knock these dudes out. I got taken down, and that was a life-changing, eye-opening experience. It was something that I didn’t prepare for properly, so I always wondered, ‘What if I had prepared myself properly?’”

In that Strikeforce event over 11 years ago, Daniels entered the cage against accomplished submission artist Jeremiah Metcalf. Shortly into round two, he was tapping out due to a rear-naked choke. The ground game was not his forte, so he went back to training in what he knew best. Daniels was back in the kickboxing ring by the fall of 2011.

After returning to his core sport, Daniels went on an impressive run over the last nine years. He won tournaments for Pain and Glory in Ireland, GLORY Kickboxing, and also picked up the GLORY title in 2015. He appeared on the first Bellator Kickboxing card in April 2016 and put together an 8-0 mark in that promotion, while winning and defending the welterweight title. However, the desire to redeem himself in the MMA cage was always lingering in his mind.

About halfway into his Bellator Kickboxing career, Daniels started dating pro MMA fighter Colbey Northcutt, the sister of young UFC veteran Sage Northcutt. The two train together in MMA, and this started building more momentum toward Daniels’ MMA return. In May 2019, he found himself on the Bellator: Birmingham card in England, where he finally got his redemption in the form of a first-round knockout of Wilker Barros.

“It was a lot of nerves,” Daniels admitted. “Things always happen for a reason, and 10 years later, in May, I did prepare myself properly, and I did do a full training camp. I made sure I was prepared in the wrestling and the jiu-jitsu, and I made sure I was in the best position to come out successfully. Of course, did I think it was going to have that big of an impact when I went in there? No. But it had that much of an impact, because I was so nervous about going back in there. I always tell people that the more nervous you are in there, it gives you the opportunity to perform better than in your entire life. It’s like an extra energy bar.”

The win brought the 39-year-old Daniels to .500 as an MMA fighter, and also one step closer to another major turning point in his life. Two months later, he married Colbey.

“It’s been an amazing experience,” Daniels said. “I’m still trying to figure it out, to be honest. I try to keep a smile on her face, and I’ll be alright. I’ll be able to fight for a longer time if I keep her happy. If not, I might be in trouble — and my wife can choke me out.”

As Daniels moves into the next stage of life, he’s intent on expanding his career as well. He co-owns World Champion Karate in Orange, Calif., and he does his primary MMA training through the Treigning Lab under UFC veteran Mark Muñoz. He also does his strength and conditioning with Sam Calavitta, his Muay Thai with Tyler Wombles and the Classic Fight Team, jiu-jitsu with guys like Kit Dale, Ryan Hall and Joe Murphy, and boxing with his coach Ramon Espada.

On Saturday night, Daniels takes to the cage once more for an MMA bout. At Bellator 238, he faces former Valor Fights mainstay Jason King. The Tennessee native is a tough-as-nails fighter as well, with his career largely representing the idea of living and dying by the sword. Of his 13 fights, only one has gone to a decision. All of King’s wins have been stoppages.

“He looks like a very strong fighter,” Daniels said. “He’s tall — just as tall as I am. You don’t get a lot of opportunities to fight someone who is six-foot or over six-foot in the [170-pound] division. They’re kind of few and far between. He’s a well-rounded martial artist, and he’s experienced. He’s 8-5, so he’s got a lot more MMA fights than I do. He’s a black belt, I believe, in taekwondo. He’s pretty solid with his wrestling and his jiu-jitsu, so it’s a good opportunity to fight a great type of fighter to test my skill set in order to test myself against the upper echelon of Bellator fighters.”

Bellator 238 carries a special meaning for Daniels as well. His business and all of his training take place in Southern California, and the event takes place at The Forum in Inglewood, which is right in his backyard. This will mark the first time he fights at home in his 40 combined kickboxing and MMA outings over the last 14 years.

“I’m really excited to be able to perform in front of my karate students, my hometown fans, and sleep in my own bed the night before the fight,” said Daniels.

Even on the brink of his 40th birthday, Daniels has not lost his fighting spirit. He is a lifelong martial artist. He is just getting started in MMA, but he hasn’t forgotten about kickboxing.

“I think it all goes hand-in-hand,” Daniels explained. “I’ve been working smarter, not harder. I look forward to defending my Bellator Kickboxing world title. I look forward to climbing the Bellator MMA ladder as well. Any time I compete, I work to become the best at it. Right now, I’m the best in Bellator Kickboxing. In MMA, the best right now would be Douglas Lima, because he’s the champion. I think he’s an amazing champion that leads by example. He’s the champion that I think other champions should aspire to be like. I look forward to the opportunity to compete with him when I climb that ladder.

“For 2020, I’d like to get at least four fights in. I want to get through this fight and then get another fight or two before August. Then, I would like to fight someone who is in the top 10 of Bellator MMA, because I believe that the Bellator welterweight division is one of the strongest divisions in Bellator. There are so many aspects and different styles of fighters. It’s awesome to be a part of. I’m kind of like a kid in a candy store.”

Daniels may not have gotten a do-over for the loss in his first MMA fight, but he did have a long, successful kickboxing career and the chance to pick up his first win in the cage. He has worked on rounding out his fighting skills, too. On Saturday night, he has the chance to put together a winning record and get on track to becoming a two-sport champion under the Bellator banner. That would be a huge accomplishment and a first for a quadragenarian combat athlete.

“I’m definitely one who’s going to go out there and put on a show,” said Daniels. “That’s my goal — to be the greatest of all time, the GOAT.”