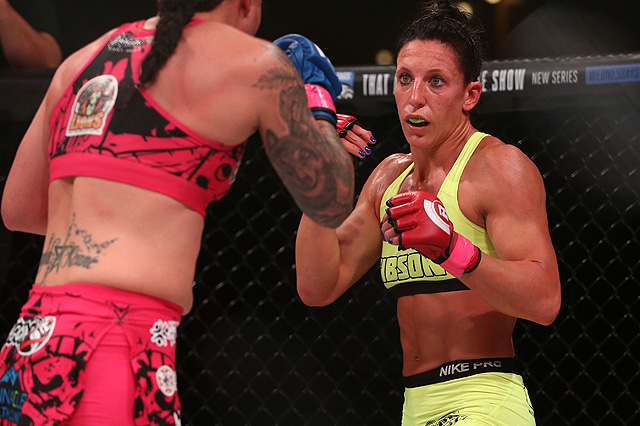 There may be no place in MMA where the elite stand quite so far apart from the rest of the field as the women’s featherweight division. For years, Cristiane “Cyborg” Justino was the de facto champion of the weight class.

Over the years, things changed. The UFC flirted with the division, and only committed once Cyborg was on the roster. Meanwhile, Bellator MMA found its own dominant force: Julia Budd. The Canadian had made her way through Strikeforce and Invicta to land in the promotion, and she steadily climbed the mountain, culminating in a championship win over Marloes Coenen.

From there, these two elite fighters saw their fortunes head in somewhat different directions. Cyborg was steamrolled by UFC women’s bantamweight champion Amanda Nunes in late 2018 to bring an end to more than 13 years of perfection. Meanwhile, Budd rolled through numerous opponents to start her own lengthy winning streak, which is now going eight years strong.

On Saturday night, these two legends meet in the main event of Bellator 238. Cyborg, who recovered from her loss to Nunes with a win over Felicia Spencer, is out to add yet another belt to her collection and put a huge stamp on her Bellator debut. Budd, now six months removed from her most recent defense, finally has a chance to squash any remaining doubts of her own standing as one of the best female featherweights of all time. One of these ladies will accomplish her goal. The other will be sent back to the drawing board.

Let’s not forget the supporting cast, though. Another man will advance in Bellator’s featherweight tournament when Darrion Caldwell and Ádám Borics collide in the co-main event. Sergio Pettis, Bellator’s latest free-agent steal from the UFC, makes his promotional debut. Potential crossover stars get a share of the spotlight as well, with kickboxer Raymond Daniels and boxer Ava Knight set for action in separate bouts.

Bellator heads to The Forum in Inglewood, Calif., for Bellator 238. The festivities kick off with the preliminary card at 7:30 p.m. ET on DAZN, Bellator.com and the Bellator app. The main card also airs live on DAZN, with a 10 p.m. ET start time.

Julia Budd has been a dominant champion atop Bellator’s women’s featherweight division, but now she’s set to defend her title against Cristiane “Cyborg” Justino, one of the most feared female fighters in the sport. Will Budd prevail?

Budd has come a long way since her two career losses. Those setbacks came in 2011 against future great Amanda Nunes — the same person who ended Cyborg’s long reign of terror — and superstar Ronda Rousey. Now, the 36-year-old has a resume that includes a Bellator title win and three successful defenses. She’s also worked her way to decisions over the likes of Charmaine Tweet, Gabrielle Holloway, Roberta Paim Samad and Arlene Blencowe prior to her title run, which also included a split nod over Blencowe. She’s even improved her finishing rate by stopping Marloes Coenen (to win the title), Talita Nogueira and Olga Rubin.

The thing is, none of these past victims stack up to Cyborg. The Brazilian spent years terrorizing some of the same women and other, more talented foes. Only Nunes destroyed her, and she bounced back to decision Felicia Spencer and silence any talk that the loss would have a psychological impact on her future fights.

What’s surprising is that Budd is actually the older woman in this fight. Cyborg has been a fixture for so long that nobody could be faulted for thinking she’d be closer to 40 than Budd, who only debuted in MMA in 2010. Age shouldn’t be the biggest factor, though. Instead, it’s going to come down to fighting styles. Budd is a grinder who loves to bully opponents to the mat and then punish them with ground-and-pound. Cyborg, meanwhile, loves to bang and overwhelm her adversaries with strikes regardless of where the fight takes place.

Cyborg is fresh off a win over a grappler in Spencer, and Budd might provide the Brazilian with another chance to rebuild her confidence while also taking a prime spot in the Bellator fold. Unless Budd proves to have unstoppable takedowns, this is going to be a tough fight for the defending champ. Cyborg’s aggressive stand-up game will be too much for a fighter that often keeps fights close. Budd might manage to survive until the final bell, but a knockout win for Cyborg is the far more likely outcome.

Darrion Caldwell and Ádám Borics square off in a featherweight tournament quarterfinal contest for the evening’s co-headliner. Who advances to the semifinals?

Caldwell, an NCAA Division I national wrestling champion, was groomed by Bellator to be part of its next wave of homegrown stars, joining a number of other collegiate wrestlers who were quickly signed up despite a lack of significant MMA experience. Initially, he lived up to those expectations, but he may have finally reached his ceiling.

After building up a 9-1 record, Caldwell did topple Eduardo Dantas to become Bellator’s bantamweight champion. He made a couple of successful defenses before running into a surging Kyoji Horiguchi as part of a co-operative deal with Rizin. First, he lost a challenge for Horiguchi’s belt. Then, he dropped his Bellator title to the Japanese fighter in the Bellator cage. These served as his first two losses since the stunning upset he suffered (and later avenged) courtesy of Joe Taimanglo.

Caldwell has rebounded with a September win over Henry Corrales, but some of the shine is gone. The Taimanglo loss was avenged just five months later and was considered a fluke. Two straight fights dropped to Horiguchi was another story. Caldwell is still a strong wrestler and great presence in Bellator’s bantamweight division, but he’s clearly not invincible.

Borics is a tough fight, too. Caldwell will be forced to deal with an undefeated Hungarian who has absolutely marched through his Bellator competition thus far. Borics, who is now based in Florida, has an arsenal that presents some real problems for Caldwell. Namely, the dude likes to throw flying knees — he used the move in his Bellator finishes of Teodor Nikolov and Aaron Pico — and has the grappling savvy to lock up a number of submissions. If Caldwell shoots in, he’ll have to worry about both the knees and a potential choke. On the ground, Borics has finished fights with triangles and leg locks.

The 26-year-old Borics is developing into a future star for the organization, and this tournament could be the perfect platform for him to make his name known to the average Bellator viewer. “The Kid” should deliver another impressive showing this weekend.

UFC castoff Sergio Pettis makes his Bellator debut against Alfred Khashakyan. Will Pettis find success in his new promotional home, beginning with a win in this bout?

Bellator and the UFC have vastly different approaches when it comes to their newcomers. The UFC, outside of a few exceptions, tend to view any free-agent acquisition as the fighter who has to prove themselves. They don’t get easy fights. Bellator, on the other hand, looks to build up a potential star or high-profile UFC veteran with a few easier fights before throwing them to the wolves. Sometimes this approach works, albeit with criticism of a padded record. Sometimes it backfires — remember how well Sergei Kharitonov did against Javy Ayala?

That brings us to Pettis. Unlike most UFC veterans, Pettis didn’t really “wash out” of the UFC. Instead, he fought out his contract and opted to test free agency. The Roufusport fighter actually won his last UFC appearance, a flyweight scrap with Tyson Nam. Overall, Pettis went 9-5 inside the Octagon. His most recent losses came to the trio of Henry Cejudo, Jussier “Formiga” da Silva and Rob Font.

So, Pettis enters Bellator as a legitimate contender in the bantamweight division. His first Bellator opponent, meanwhile, suffered a loss in his pro debut and failed on both Dana White: Lookin’ for a Fight and Dana White’s Tuesday Night Contender Series. His three most recent setbacks came courtesy of Juan Archuleta, Ricardo Ramos and Sean O’Malley. This looks like a smart booking strategy to elevate Pettis.

Khashakyan ticks off all the boxes as a respectable opponent for Pettis’ promotional debut. He has a solid winning record and appearances on high-profile events where the UFC president was in attendance. He also lost those key fights and has never appeared for Bellator before. The 31-year-old could score a quick knockout — he’s done so in his last three fights — but Bellator is banking on him being a beatable fighter in this match-up.

Aaron Pico’s prelim fight could be interesting. The super prospect has stumbled to a 4-3 pro record, and it could be do-or-die for him when he meets Daniel Carey in a featherweight showdown.

Pico was touted as the next generation of mixed martial artist. He entered MMA with accolades in freestyle wrestling, boxing and pankration. Things didn’t go as planned, though. Pico’s professional MMA debut with Bellator ended in a loss to Zach Freeman. He bounced back with four wins, including first-round finishes of seasoned veterans Shane Kruchten, Lee Morrison and Leandro Higo, but his two most recent fights ended in losses to Henry Corrales and Ádám Borics.

Clearly, Bellator has pushed Pico to advance too quickly. Freeman was a 10-fight veteran when he welcomed Pico to the pro ranks. Corrales and Borics are strong featherweight contenders with a double-digit number of fights under their respective belts. It’s time to slow things down for the blue-chipper. That’s where Carey supposedly comes in.

The 29-year-old Carey is a 10-fight veteran, but he only sports a 7-3 mark. He’s stumbled against the likes of JR Coughran, Kendall Carnahan and Adil Benjilany. His biggest wins have come against up-and-comers Cris Lencioni and Gaston Bolaños. In other words, he’s still a test for Pico, but not an insurmountable one at the level of a Corrales or Borics.

Carey has a couple of submissions and a couple of knockouts on his resume, so Pico can’t take this fight too lightly. How he performs will say a lot about his future potential in the sport. His recognizable name will make Carey more hungry for an upset win. These ingredients could make for a surprisingly fun fight.