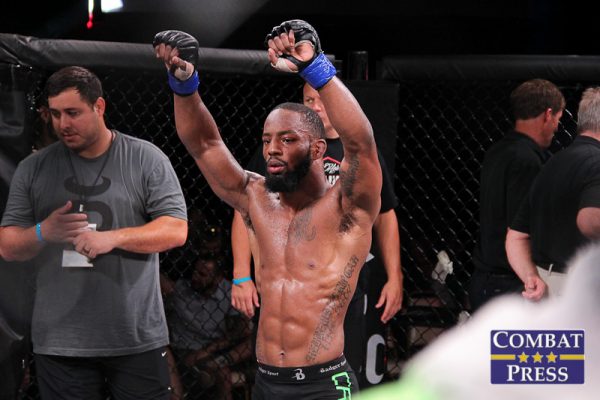 The Professional Fighters League will debut its new format on June 7, and there will be a familiar name headlining the card. Former World Series of Fighting featherweight champion Andre Harrison aims to validate the belief that he’s the favorite heading into the inaugural PFL season.

There was a time when MMA fans thought Harrison to be on his way to the UFC or Bellator. After all, the WSOF was no more, and the entire game was being changed by the promotion into a season and playoffs, similar to other professional sports. However, Harrison remained loyal to the company and re-signed with the newly minted PFL.

“I had a great experience with them,” Harrison told Combat Press. “They’ve always treated me well. And there’s a lot of money going into this tournament. If I win my next few fights, I become a millionaire, whereas in the UFC, I’m not even sure what I’d make for my first few fights but I know it wouldn’t be anywhere near a million dollars.”

Formerly the WSOF, the Professional Fighters League recentlydebuted the new season format and the full roster. Fighters will compete over the course of a season with the best moving on to the playoffs. From there, it will be a win-and-advance format, similar to the NFL playoffs. Eventually, a division winner will be crowned and awarded a $1 million grand prize. There have been similar versions of this format in MMA, but there are subtle changes that make this attempt different. The format is familiar to the former collegiate wrestler.

“It’s kind of reminiscent of my wrestling career,” Harrison said. “You have one fight now, one a little later, then two in one night and onto the finals after that. It’s like the playoffs in the NFL and NBA.”

The new format is appealing for both fighters and MMA fans. It gives fighters the opportunity to fight on a regular basis and the chance to cash in at the season’s end. It also provides them with the opportunity to advance their careers simply by winning, not having to worry about cutting a promo or trash-talking across social media. For fans, it eliminates any confusion as to who the best fighters are by allowing only the athletes who perform the best to advance to the playoffs. There will be no interim titles or fighters leapfrogging one another simply based on their abilities to hype themselves. Simply put, the best fighter will win.

With that said, there are obviously a fair amount of questions surrounding the season. Most fighters at the higher levels only compete a few times a year, making injuries and durability a major concern in a format that requires them to compete more frequently. The promotion has done away with elbows to help prevent cuts, but that won’t help the athletes who have to undergo a rigorous physical-training regimen throughout the season. Guys who balloon up in weight between fights will struggle to cut those extra pounds and perform at a high level throughout the season. No fighter ever enters a bout at 100 percent, but this could be an even tougher task for fighters who make it into the playoffs.

“I have an amazing physical therapist and doctor in Jonathan Amator and Dr. Michael Camp,” Harrison said. “They work on me several times a week and make sure all my muscle groups are firing properly. They really know what they’re doing and take their time to make sure I’m performing to the best of my abilities. I still train hard and diet properly. I’m doing things the same way I’ve been doing them since I became a professional mixed martial artist. You can’t argue with the results — it’s a winning formula.”

That winning formula has brought Harrison to not only the top of the featherweight division and the WSOF, but it’s also helped him become one of the promotion’s biggest stars. Harrison has enjoyed sponsorship deals with well-known companies like Everlast. He has done everything he can do to validate the hype surrounding him. Prior to joining the WSOF’s ranks, Harrison won the Ring of Combat and Titan FC featherweight titles. “The Bull” also defended the Titan belt on four occasions before signing to the WSOF. With an unbeaten record and an ever-improving skill set, he is poised to become one of the most well-known fighters outside of the UFC.

“You’ll see my face on a lot of the media, and they do put a lot of press behind me,” Harrison said. “Personally, I think it’s well deserved. I came in with a great record, made my debut on their New Year’s Eve card and got a first-round finish. In my next fight, I took the belt from Lance Palmer. We fought for five rounds, and it was a very entertaining fight. I thought it was a dominant performance, and then I went on to defend the belt. I think my dominance has solidified me as one of the focal points of the company, and I’m looking forward to building on that with this upcoming season.”

Harrison will have the opportunity to maintain his unbeaten record and build upon his momentum when he faces Jumabieke Tuerxun in the PFL 1 main event. Tuerxun is a former UFC competitor and previously enjoyed a lengthy unbeaten record himself, starting his career with a 15-0 run before signing with the UFC. With a roster featuring the aforementioned Palmer, Alexandre Almeida, Marcos Galvão, Timur Valiev and others, the featherweights are arguably the PFL’s most talent-rich division. The future match-ups are uncertain, but there are definitely plenty of interesting fights down the road for Harrison.

“The only person I’m looking forward to fighting now is my good old friend Juma,” Harrison said with a laugh. “I don’t ever look past anybody. If I start looking past people, then I’m taking away from Juma and then he’d be able to come in and not get the best version of myself. That’d be a disrespect to him. He’s a professional, and he’s won 20 professional MMA fights. That’s not an easy task for anybody — I haven’t even won 20 professional fights yet. For me to look past him, that’s not something I’m willing to do.”

Harrison’s mindset has been forged by the crew over at Bellmore Kickboxing Academy, where he carries out his training camps. The Bellmore coaches have molded Harrison from a great wrestler into a well-rounded fighter capable of winning a bout through multiple methods. The understanding of what it takes to become a champion and the attitude to maintain that status has also rubbed off on Harrison from some familiar names.

“It was fun training with Chris [Weidman]. When we were warming up, I looked in the mirror and I had no idea how much bigger he was than I am,” Harrison said. “It was one of those things like, ‘This is a pretty big dude!’ I’ve known Chris since high school — I went to Freeport and he went to Baldwin — so I’ve known him for years now. He’s a good dude. A really, really hard worker. I definitely learned a lot from training with him. But if you run into him, just remind him that I submitted him and he needs to work on some things.”

Harrison jokes about training with an old friend, but the upcoming season is fast approaching and soon the Long Island native will swap his trademark smile for the demeanor of a serious competitor. With an unprecedented amount of money on the line and a field full of high-caliber opponents, Harrison has a simple message for the rest of the division.

“It’s alright to get second place,” he said.