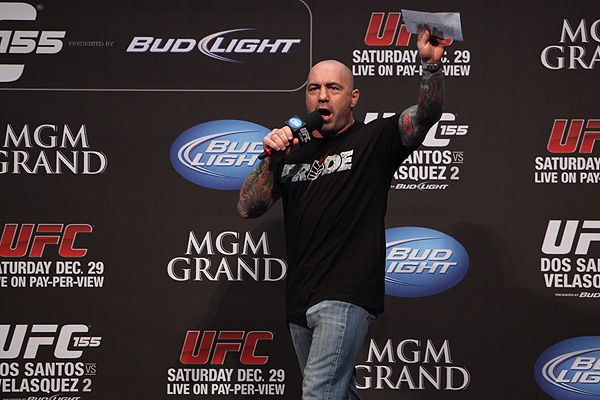 Was Joe Rogan’s Commentary Fair for Nurmagomedov vs. Iaquinta?

Usually when people talk about the veteran UFC color commentator Joe Rogan, it’s almost always positive ratings. According to these reviews, he is great, incredible, and arguably the best ever at what he does. Since being hired by the UFC in 1997 as a backstage interviewer, Rogan has made his mark in the company’s history. He was quite quickly able to rise up to where he is in his career now and earn a reputation as one of the best at what he does.

However, Rogan is also a human being. He makes mistakes, and he apologizes, like everyone else. Rogan at times is put on the spotlight in front of the whole world in a job that requires quick thinking on the feet and the requirement of satisfying the crowd. This past weekend at UFC 223 was different, though.

Rogan was simply doing what he has done for over a thousand fights. He just calling another one, this time between lightweights Khabib Nurmagomedov and Al Iaquinta. Sure, it was the main event. It was a great fight, too, given the circumstances. Yet, this is not enough to excuse Rogan from the mistake he made.

On a side note, none of this should take away from the fact that Iaquinta stepped up on one day’s notice to not only fight against one of the most feared fighters in the world, but went the distance with him. Call it a landslide or an ass-whooping, but don’t call it boring or even bad. It was a great fight between two warriors, far more than what we could have asked for out of a fight made on less than one day’s notice.

Again, this was the headliner on a broken-down card that in its original form had the potential to be the best card of the year. Let’s also not forget that it was a rough week for the UFC and its fans, following Conor McGregor’s wild outburst on Friday. Nurmagomedov was supposed to fight Tony Ferguson originally, who was then replaced by Max Holloway, who was in turn replaced by Iaquinta after the UFC had attempted to secure two other opponents for Nurmagomedov.

Nurmagomedov’s dominance was immediate from the opening bell, just like in any other one of his fights. Iaquinta, while successfully fending off the first couple of takedowns, was eventually dragged to canvas. At that point, it turned into a typical Nurmagomedov fight.

Once the third round began, it seemed like the flow of the fight changed a little bit. Iaquinta was able to defend Nurmagomedov’s takedowns and the entire third and fourth rounds were spent on the feet.

It was during this time when the controversy came. The criticisms of Rogan toward Nurmagomedov’s striking were mainly seen while “The Eagle” was landing sharp jabs over and over on Iaquinta’s face, slowly bloodying it up. The UFC color commentator wasn’t so happy with it, repeatedly questioning why Nurmagomedov had not taken the fight to the ground again. At times, Rogan was even telling fellow lightweight fighters to thank Iaquinta for exposing the “weakness” in Nurmagomedov’s game.

Rogan’s in-fight analysis caught fire after the event. He came under a lot of heat for his comments. It ultimately got to the point where he came out and publicly apologized on an Instagram post the day after the event.

As we were able to see on Monday afternoon on one of the most beloved MMA shows out there, The MMA Hour, Nurmagomedov’s head coach Javier Mendez expressed his unhappiness with Rogan’s biased commentating. His dissatisfaction can be understood, as the scorecards read a lopsided 50-44, 50-43 and 50-43, which you don’t see often at this level.

Absolutely. They were not fair statements regarding Nurmagomedov’s striking.

Were his comments biased?

Not really. It seems like Rogan and his colleagues put Nurmagomedov’s skill set at such a high level that anything other than pure domination is viewed by them as not good enough.

Were they discriminatory? No. We all know how highly Rogan thinks of Nurmagomedov and his record. In a way, Rogan’s comments were complimentary.

Now, the question that matters the most: Does Rogan deserve so much crap for the comments he made at UFC 223?

Look, mistakes happen. The commentary job may look fun and easy, but nobody should discredit the talent that is required to do what Rogan does. Thinking quickly on your feet while standing in front of the world is by no means an easy job. Saying what you truly think at that moment of chaos will always have backlash to a certain extent, because there will always be those who don’t agree.