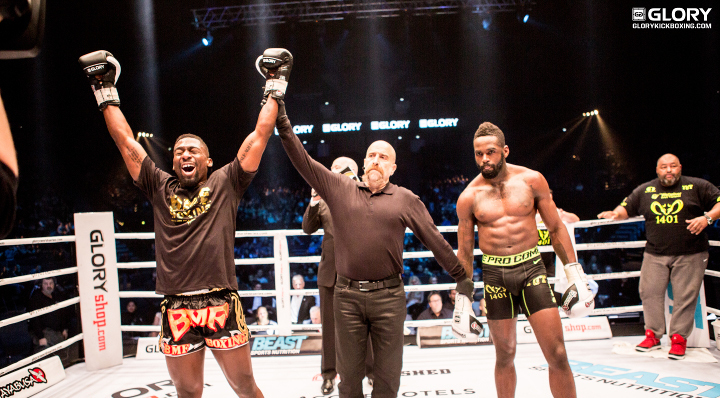 GLORY Kickboxing makes the trip to the Sears Centre Arena in Hoffman Estates, Ill., on Friday, Aug. 25, for GLORY 44: Chicago.

In the evening’s headliner, GLORY welterweight champion Cédric Doumbé puts his title on the line against familiar foe Murthel Groenhart. Doumbé kicked off his current 12-fight winning streak with a decision victory over Groenhart in his home country at GLORY 28: Paris. The champion makes his debut in the United States against the surging Groenhart, who has won six of his past seven fights.

Doumbé has proven himself as one of the best kickboxers in the world. The 2016 Combat Press Fighter of the Year has been on a meteoric rise over the past two years. The champ has earned 16 victories in his past 17 fights. His only loss — against Fang Bian in China — in that stretch is widely considered one of the worst decisions of the year. Doumbé has defeated Nieky Holzken (twice), Yoann Kongolo (twice), Ben Hodge, Brad Riddell and Groenhart. Doumbé’s skills have grown exponentially in a short period of time. At only 24 years of age, he is coming into the prime of his career and could be among the greats in kickboxing history if he continues winning at this pace.

Enter Groenhart, the man who wants to shut down Doumbé’s run and avenge his loss to the welterweight king. Groenhart has come into his own over the past year and change. The Mike’s Gym product has finally shed his label of being inconsistent from fight to fight. He has won six of his past seven with big victories over the aforementioned Kongolo, Harut Grigorian, Jonatan Oliveira, Karim Benmansour and Thongchai. Groenhart captured the GLORY 31 welterweight contender tournament, but he couldn’t capture the gold with Holzken at the helm. He arguably defeated Holzken at GLORY 26 and battled tough at GLORY 34, but he ultimately fell short in both of his title challenges. The Dutch kickboxer has one of the best resumes in the sport, and a victory would finally get him to the top of the division.

Doumbé’s progression and fighting style could make that feat quite hard to reach for Groenhart. In their first fight, Doumbé used his excellent combination of counter striking and defensive responsibility to frustrate Groenhart. Doumbé forced Groenhart to be cautious at times, which is the exact opposite of what Groenhart wanted to do. If the skilled contender hopes to turn his fortunes around, he needs to pressure Doumbé, cut off the ring, and throw more than one or two strikes at a time. Groenhart needs to touch Doumbé every time he is in range.

Doumbé has refined his defensive tools and movement since their last meeting. He frustrated Kongolo every time he would press forward to attack. The Frenchman shut down Holzken’s boxing and truly showcased his talents. Doumbé spent time with fellow top-five welterweight Artur Kyshenko to prepare for his impending match-up with Groenhart. Kyshenko is one of only two other people to defeat Groenhart in the past two years.

Doumbé seems to be doing all of the right things in and out of the ring. The Frenchman looks like a fighter who could be perfect for the promotion. He isn’t shy when it’s his time to shine. Doumbé’s confidence is at an all-time high. The fight is likely to go the distance, and Doumbé’s hand will be raised in the third defense of his title.

The main card features five welterweight bouts, including the one-night, four-man contender tournament. Which fighter stands out among the field?

The welterweight rankings are in flux. Cédric Doumbé was able to unseat long-reigning champion Nieky Holzken at GLORY: Collision, and the Frenchman soundly defeated him once again at GLORY 42. Murthel Groenhart earned his title shot without running through the tournament field for a third time. Factor in the big win for Yoann Kongolo over newly acquired top-10 welterweight Yohan Lidon, and the welterweight division is a little crowded. This tournament is likely to find another fighter who could potentially enter the title discussions. Don’t expect the winner to get the next shot at the title, though, unless GLORY needs a fresh face to fight Doumbé, should he defeat Groenhart.

The fighter that sticks out in this tournament is Harut Grigorian. He is the most experienced and toughest among the tournament field. Unfortunately for the Armenian-Belgian welterweight, he was brutally knocked out just two months ago against the aforementioned Groenhart. Grigorian went down hard when he turned his back to the top welterweight contender. The controversy continued when two fans entered the ring to attack Groenhart following the win while Grigorian was unconscious on the mat. It is the fighter’s responsibility to protect themselves at all times, so the knockout wasn’t cheap or unsporting — Groenhart was merely going after an opponent who was stunned. It’s not the first time it has happened, and it won’t be the last.

However, that brutal knockout at the hands of Groenhart will have an affect on Grigorian. It’s never good to see a fighter get back into the ring so quickly after a knockout loss, but coming back to an event with the possibility of two fights in one night is even tougher. If not for the recent knockout, Grigorian could be considered the heavy favorite in this field. He is hovering just outside the top-10 after scoring 12 wins in his past 14 fights. Grigorian holds victories over Tayfun Ozcan, Nordin Ben Moh, Danijel Solaja, Marco Piqué and Maximo Suarez in that stretch. He is an aggressive striker with a nasty penchant for hard-hitting exchanges in the pocket. This style isn’t the best for a guy who just took the kind of damage Grigorian absorbed against Groenhart. Yet, Grigorian is an absolute warrior and very well could excel in this bracket.

Grigorian meets a tough opponent in the opening round when he takes on Karim Benmansour. The skilled Frenchman holds wins over Yoann Kongolo and Darryl Sichtman prior to his GLORY career and victories over Eyevan Danenberg and Alan Scheinson inside the promotion. Benmansour has been knocked down five times in his four fights with the promotion. This will be the pivotal match-up in the tournament.

Following the recent trend of GLORY tournaments, the winner of the fight between Grigorian and Benmansour might be too banged up to win another fight later in the night against what looks to be a relatively fresh finalist. That other finalist will be Antoine Pinto, who will show his experience and put American Casey Greene away will relative ease. The French Muay Thai prodigy began fighting as a teenager and has since amassed an impressive 132 wins and 77 knockouts.

If the scenario plays out that Pinto comes into the finals against a battered Grigorian or Benmansour, then Pinto will win the tournament. The 26-year-old has racked up 25 wins in his past 27 fights, including a decision victory over Richard Abraham at GLORY 38. Translating his style to kickboxing will take a little time, but Pinto is an intriguing contender in the GLORY welterweight ranks.

GLORY super bantamweight champion Tiffany van Soest makes the first defense of her title against Funda Alkayış. How does the fight play out?

Van Soest made a splash when she entered the GLORY ranks during the super bantamweight grand prix in 2016. The former Lion Fight women’s featherweight titleholder broke into the promotion with plenty of hype surrounding her. The 28-year-old took the tournament field by storm with a dominant win over Morocco’s Esma Hasshass. The young American captured the tournament title with victories over Canada’s Jessica Gladstone and France’s Amel Dehby in one night at GLORY 36. Following her last fight, van Soest reunited with former coach Alexander Palma at the Blue Ocean Muay Thai gym in San Diego. Van Soest had been training out of Bali MMA with ONE Championship veterans Gianni Subba and the Leone brothers in preparation for her career as a mixed martial artist with Invicta FC.

Alkayış, who some might recognize as Funda Diken, is an experienced Muay Thai and kickboxing competitor with over 200 combined amateur and pro fights. In 2009, the Turkish fighter started her martial-arts journey in the name of fitness, but it was clear she was destined for more when her training began. Alkayış won titles in her home country of Turkey, as well as European Muay Thai, kickboxing, and wushu championships. She first caught the eyes of a bigger audience when she stood toe-to-toe with top female pound-for-pound great Anissa Meksen in one of the best fights of 2014. Despite a potential match-up with Iman Barlow at Muay Thai Grand Prix 6 that fell through, Alkayış showcased her skill level with a one-sided decision victory over Vanessa De Waele at GLORY 32 in July 2016.

Van Soest will head into this fight as the favorite. She is currently ranked inside the Combat Press women’s pound-for-pound rankings and holds one of the more impressive resumes in the sport over the past few years. Her confidence under kickboxing rules has continued to build as she gets more experience in the GLORY ring.

Alkayış brings an intriguing style to the table. She is an aggressive, high-output fighter who likes to display her diverse array of kicking techniques. Alkayış switches stances to throw a lead-leg front kick and combines her strong right hand in with low, middle and front kicks to throw her opponent off.

This fight should be a grind for the champion in the first few rounds. However, van Soest will find success inside. The big questions are whether van Soest can match Alkayış’s output and if Alkayış can maintain that output throughout the fight.

Despite the threat from Alkayış, van Soest will pull out a strong performance with everything on the line.

Editor’s Note: Funda Alkayiş was replaced by Meryem Uslu following the posting of this preview.