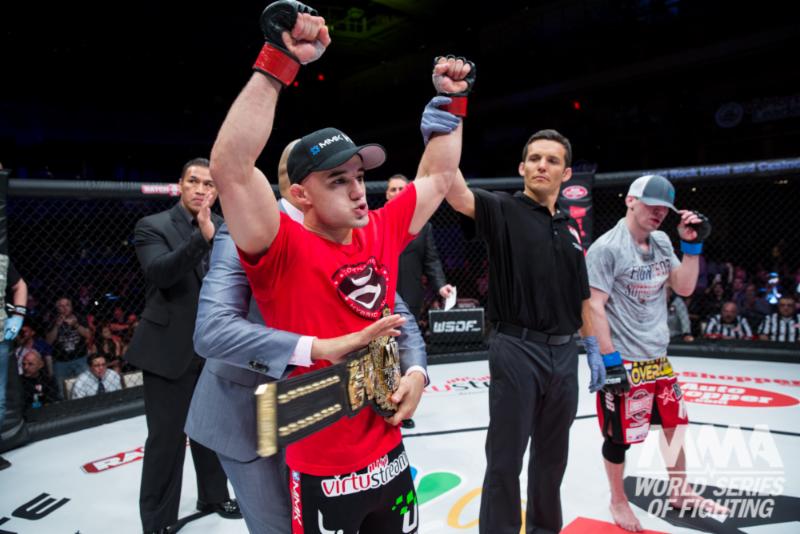 On Saturday, Sept. 13, World Series of Fighting hosted its 13th event from the Sands Casino Resort in Bethlehem, Penn.

In the night’s main event, bantamweight champion Marlon Moraes took on Ultimate Fighter veteran Cody Bollinger in a 147-pound catchweight. Moraes was originally expected to defend his 135-pound title against Josh Hill at the event, but Hill was forced out with an injury just two weeks prior to the event. The 26-year-old Moraes had reeled off seven straight wins heading into the bout, including five straight in the WSOF cage. Bollinger, meanwhile, had earned three straight wins since falling short in his lone Bellator MMA appearance. He was famously cut from TUF after missing weight, but had rebounded with two wins under the WSOF banner.

The co-main event featured a pair lightweight prospects as Keon Caldwell squared off with Ozzy Dugulubgov. Caldwell looked to get back in the win column after being submitted by recent title challenger Nick Newell in his last outing. Dugulubgov was also looking to get back on track, having fallen via split decision to Jonathan Nunez in his most recent WSOF appearance.

In the main event, World Series of Fighting’s bantamweight champion Marlon Moraes didn’t have to put his title on the line, but showed up in championship form anyway. Moraes styled on Cody Bollinger from the opening minute with his slick kickboxing skills, peppering Bollinger with punches and leg kicks. The end came early in the second round, when Moraes dropped Bollinger with a left hook, then locked up a rear-naked choke shortly thereafter, forcing the tap.

Ozzy Dugulubgov returned to the win column with a stunning third-round knockout victory over Keon Caldwell on the card’s co-main event. Caldwell started off strong, winning the first round with positional dominance in the wrestling department. As the fight wore on, Caldwell began to slow, while Dugulubgov striking pace began to pick up. It all culminated in the third, when Dugulubgov landed a crushing right hook flush on the jaw, sending Caldwell to canvas unconscious.

Highly-touted featherweight prospect, Timur Valiev, cruised to his eighth consecutive victory in the cage with a unanimous decision win over Isaiah Chapman. In all three rounds, Valiev used his wrestling to gain back mount and throw down vicious ground-and-pound for an extended amount of time. Chapman was able to survive, but was never capable of mounting any offense of his own.

In the opening bout of the evening, Ring of Combat veteran Frankie Perez improved his record to 9-1 following a unanimous decision victory over Tom Marcellino. Perez was dominant from the opening bell, using his superior striking to out-point Marcellino for the full fifteen minutes. All three judges saw the same thing, awarding Perez every round.