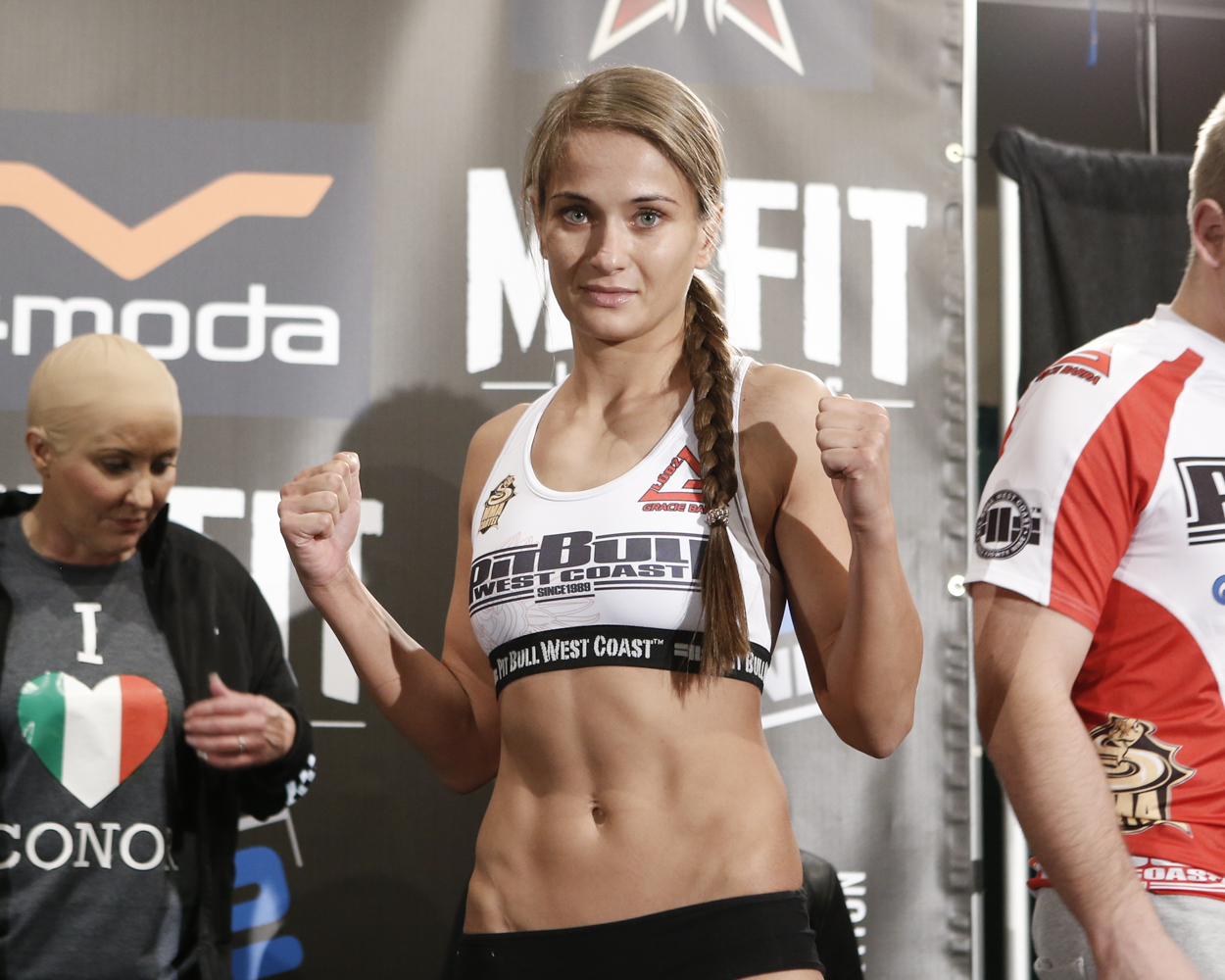 An Objective Look at Karolina Kowalkiewicz

Let’s take a look at Kowalkiewicz’s attributes, fight game and resume to see what it tells us about her ranking, her ability to improve and her future success.

Unlike the vast majority of fighters in the top 10 of her division, Kowalkiewicz is not a standout athlete in the areas of explosiveness, hand speed, foot speed, fluidity and agility. She is stunningly average.

Kowalkiewicz is a scrapper who is defined by her mobility, aggression, durability, activity and physicality. These attributes allow her to manage her physical and technical limitations by using a style that emphasizes constant movement, high offensive output, and aggression. In every fight, she has been summarily outclassed athletically, but she has managed to win — or at least be competitive in losses — by pushing the pace, imposing her will physically, and constantly attacking.

Kowalkiewicz is a relative newcomer to MMA, which seems to go against her rather lofty ranking in the division. Again, she is one of the least gifted fighters athletically. Unfortunately, that same assessment would apply to her technical skill set. However, in the same way her intangibles make up for pedestrian athleticism, her desire to improve and her self-awareness in her approach allow her to overcome technical deficiencies.

Kowalkiewicz’s biggest weapons are volume and variety. She uses a fairly wide array of strikes used in combination to overwhelm an opponent and break them down by aiming those strikes at different targets. All of her offense comes off of her jab, which is a multifaceted weapon that controls her opponent’s movement, sets the table for her strikes and clinch attempts, gauges the distance for her strikes and clinch attempts, and acts as a line of defense against an opponent’s strikes, clinch and takedown attempts.

The secondary weapons Kowalkiewicz uses would be her constant movement, mainly in circling, and her frequent stance switching. The constant circling allows both fighters to out-position their opponents, creating opportunities to crash the pocket with combinations and, in the case of Kowalkiewicz, gain the clinch. The stance switching provides an extra layer of defense and offense, depending on the stance. The constant change in distance and position opens up a variety of targets on either side, while allowing the Polish fighter to limit the amount of targets and their availability.

These weapons impact three different things in regards to Kowalkiewicz’s opposition. It mentally taxes opponents. They have to constantly make reads in how to attack, defend and counter her. It also creates clear opportunities to apply tremendous amounts of pressure, which exhausts opposing fighters physically. Furthermore, it creates clear avenues to work her way into the clinch. The clinch is the one area where Kowalkiewicz has a clear technical advantage. She can use an array of techniques to break down or take down opponents from the clinch, and she can control them and drain their gas tank with her strength and physicality.

The best examples of Kowalkiewicz’s positive attributes can be seen in her fights against Heather Jo Clark, Randa Markos and Rose Namajunas.

Kowalkiewicz’s problem is the same problem most fighters at her stage have: she is very limited in her overall skills and the amount of depth she has in each individual area. Unlike other fighters who lean on a particularly strong skill set or athletic ability, the Polish fighter instead leans on the uniqueness of her style to close the technical and physical gap between her and her opposition.

The problem she has is twofold.

First, her style requires her to lead the dance. Whether she is going forward, in circles, throwing combinations, getting into clinches or working on the ground, she has to be dictating when, where and how the engagement occurs. When she can’t do this, her lack of a consistent defensive or counter game is exposed. The best example is her fight with top-five strawweight Claudia Gadelha. The Brazilian initiated clinches and, as a result, dominated those clinches, controlling and landing the much more decisive shots in the clinch. Even before the clinch became an issue, Gadelha was able to punch with Kowalkiewicz and not allow her to get her momentum going offensively. This put a bright light on Kowalkiewicz’s nonexistent head movement and her inconsistent parry and block game. The final and best example of how much initiative and aggression defines her game is shown in how easily she was taken down by Gadelha and how quickly she was out-positioned and finished.

The second problematic aspect of Kowalkiewicz’s style is that it’s much more tricky than technical. It’s made to mask or minimize the areas where she can be exploited. Her constant movement and stance switches mask her technically limited footwork. She uses the switches to create angles to enter and exit in the place of properly developed angles, pivots, slide steps and foot pressure. At range, her consistent circling allows her to get fighters out of position, but when she does enter or exit when under duress, she does so on straight lines. This often results in her getting out-positioned, countered, or turned on the inside. This was repeatedly seen in her fight against Joanna Jędrzejczyk in a five-round loss. Shades of this were also present in her upset win over current title challenger Namajunas.

Her punches make for another example of where technical limitations are covered by strategical schemes. Kowalkiewicz is not a textbook puncher in form or execution, which impacts the sharpness and power of her strikes. She instead uses volume to make up for the lack of power, and more times than not will use these strikes to bridge the distance to create clinch opportunities by forcing an opponent to the cage, where she can get her hands on them or get into exchanges which allow her to transition into clinches.

Kowalkiewicz’s opposition inside the Octagon has been very good. Her last three fights came against three of the best fighters in the division in the form of the aforementioned Gadelha, Namajunas and Jędrzejczyk. That being said, her record against the elite ladies of the division is less than stellar. She went 1-2 versus the trio.

Against Jędrzejczyk, Kowalkiewicz had one moment of success when she dropped the champion. Otherwise, she was outclassed, out-positioned, outworked and soundly beaten to the tune of a unanimous decision. Opposite Gadelha, she was outworked, bullied, taken down and quickly submitted. The only win the Polish fighter has had against elite competition came over Namajunas, and it was far from decisive. In fact, the fight could have gone either way. It just so happened to go Kowalkiewicz’s way based on her dominance in the clinch, even though she was clearly outclassed in the other areas where the fight took place.

Kowalkiewicz’s ranking and reputation as one of the best fighters in the division was a combination of the dominance of the champion — much like flyweight champion Demetrious “Mighty Mouse” Johnson, Jędrzejczyk has been dominant to the point where she has forced fighters into title shots with very limited experience and skills. In other words, the most notable reason for the Polish fighter’s high placement was the lack of depth in the division. Her singular win over Namajunas punched her ticket to the title fight, and this was in large part due to the fact that Namajunas was so close to the title herself.

While Kowalkiewicz’s performance against Namajunas was impressive, it was far from decisive. It said a little bit more about mistakes made regarding Namajunas than it did about any standout technical improvement by Kowalkiewicz. As Kowalkiewicz’s level of opposition has increased, the fighter herself has seemed to regress technically and be further exposed physically. This is a sign that she got too much too soon and was not in fact as good as her ranking made her out to be.

Her wins over Clark and Markos back up this point. Those two ladies are top fighters athletically, but their inconsistency in and out of the cage has kept them from being thought of as world-class fighters. In both fights — unanimous decisions in favor of Kowalkiewicz — the Polish fighter’s opponent was in the fight from start to finish. The wins were decisive, but they weren’t dynamic or dominant. At no point was the impression made that they were incapable of competing on her level or that she was in a class above them technically, strategically or athletically.

In her native Poland, Kowalkiewicz begins her ascent back up the rankings. The UFC has allowed her to take a step back from the elite athletic and technical talents, instead putting her in with a veteran combat-sports athlete who has a name, an exciting style and a reputation as a world-class fighter, albeit at a lower weight class.

This fight is a must-win for Kowalkiewicz. Regardless of the quality of Esquibel, she isn’t an elite athlete or fighter at this weight class. If Kowalkiewicz was to lose to a fighter who hasn’t shown that she is or will be elite, it would mark a huge setback. It would show that Kowalkiewicz may have plateaued as a fighter or, worse yet, is regressing. Her job with the promotion and her future in the sport would be in question.

On Oct. 21, we find out if Kowalkiewicz is a young fighter given too much too soon, or a fighter who was exposed as soon as the level of opposition was raised.