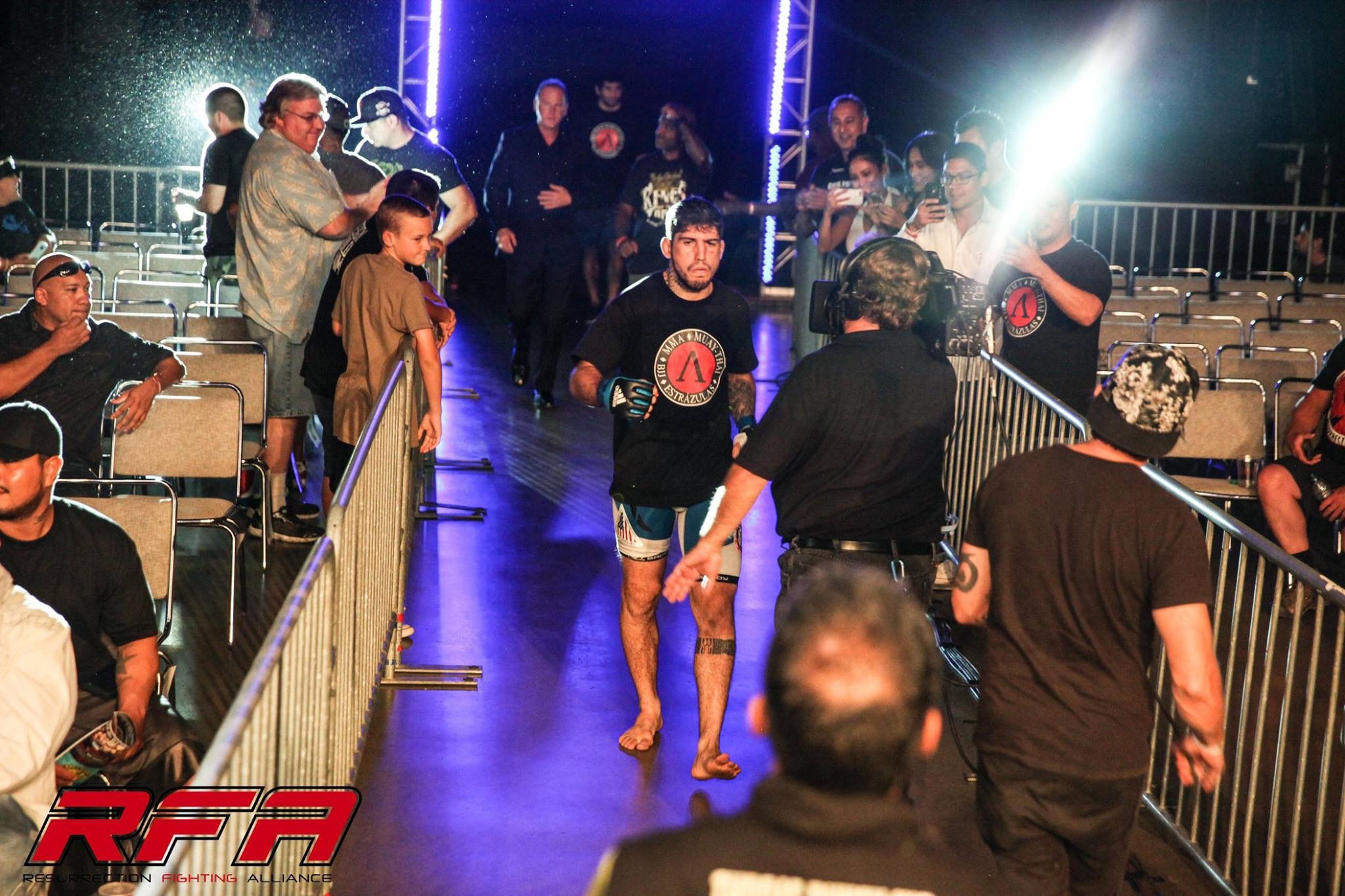 It takes a different kind of person to walk into a locked cage and fight another person until one of them is either submitted, battered, or out cold. Not all MMA fights end that way, granted. There are decisions, draws, disqualifications, and other potential endings. However, the goal is always to win by stoppage.

Arthur Estrázulas has been a pro fighter for over a decade. He started in the state of Ceara, Brazil, where he moved from Porto Alegre when he was 12 years old. He accumulated a 6-2 record before moving to the United States. Finally back in the cage in October 2015, he has since won four fights by submission and two by knockout. His two losses were decisions.

“All my friends think I’m too crazy, too psycho,” Estrázulas told Combat Press. “They say if I was not fighting, I would probably be killing people. I don’t know about killing people, but definitely when I stand in the cage to fight, I go to do or die.

“I know there’s a referee in there who can stop the fight. That’s not my job. But, I definitely go in there to make some action. I’m not afraid to lose. I already have four in my career, and in one of them, I broke my arm. I’m not proud of that, but I put myself there to fight. That’s what I do for a living.”

Despite growing up in the birthplace of Brazilian Jiu-Jitsu, Estrázulas didn’t even step onto a mat until he was 15 years old.

“I tried so many things when I was young, and I never really knew what I wanted to do,” he admitted. “I think fighting is something that is outside of school when you’re a kid. As soon as I started training, I liked it, but everything was as a professional. When I first got the chance to do an MMA fight, I turned it down, but it was after my first fight that I decided this is what I wanted to do with my life.”

In 2014, after 10 years of training, Estrázulas earned his black belt in BJJ and subsequently moved to California. For several years, he had been a coach working with many up-and-coming and established pro fighters out of Kings MMA in Huntington Beach. UFC flyweight and former Legacy Fighting Alliance champion Sabina Mazo, who trains there, is Estrázulas’ girlfriend. The camp is also home to many UFC veterans, including Fabricio Werdum, Mauricio “Shogun” Rua, Beneil Dariush, Giga Chikadze and Kelvin Gastelum.

“Since I moved here seven years ago, I always took everything as an opportunity to learn,” Estrázulas said. “When I moved here, my goal was to always be a fighter. Every time I have a chance to be around Dariush, Gastelum, Giga, or any of those other guys, this is a great opportunity to learn. But, there was a point in my life that I had to decide. I don’t want to be a coach. I want to be a fighter. It was kind of hard for me to be more of a partner than just a coach for the people I work with.”

Estrázulas last stepped into the cage at LFA 86 in July. He served as the co-main event against then 14-10 Dominic Clark. With 94 seconds left in the first round, the Brazilian scored a submission by rear-naked choke. Like any fight, this one carried a lesson that the former coach can certainly appreciate.

“It is very special when I win a fight, but I am always learning,” Estrázulas explained. “I’m still far away from where I want to be. In my last fight, I learned that even though you may go into the fight wanting to do something, you need to be aware of what the other guy is going to do. I rushed a little too much, and the guy grabbed me, which is fine, because I love to grapple. But, I want to control more of the distance and strike more.”

The win over Clark marked two submissions in a row in the LFA cage and put Estrázulas in line for a crack at the lightweight title. He was not ashamed to let the LFA brass know about his intentions.

“I asked Ed [Soares, LFA CEO] right after my last fight,” Estrázulas said. “I remember the week after was the fight for the lightweight title. I told them I was ready if someone pulled out, and I wanted them to put me there for the belt. As soon as I saw the fight, I was like, ‘Man, let me fight this guy. I can beat him.’ I just kept pressuring them to give me that fight, you know? Then, it happened maybe six weeks ago.”

At LFA 87, Bryce Logan beat Jacob Rosales in a five-round battle for the vacant belt. Logan, however, was subsequently signed to Bellator. This vacated the LFA strap once again. The company quickly lined up a new title bout between Estrázulas and Nick Browne. The fight, which takes place on Friday night, serves as the headliner for LFA 95 in Park City, Kan.

“I haven’t watched much about him, but I saw his last fight,” Estrázulas said.

Browne is a former wrestler and All-American boxer who also holds a black belt in BJJ. He trains out of Uniontown, Pa., and throughout the Pittsburgh area. His last fight was the co-main event at LFA 87, where he beat Ben Egli by unanimous decision to take his pro record to 10-1.

“He looks like American jiu-jitsu,” said Estrázulas. “He looks like a mix between a wrestler and a jiu-jitsu guy, a guy who likes to grapple. So, it’s actually a good match. I think it’s going to be a good fight for the fans. Nobody is going to want to step back.”

The 31-year-old Estrázulas has been patient in his rise in the sport. He knows what he wants, but he isn’t expecting to just fall into anything. That is a mistake that too many fighters make. Instead, he plans to earn it.

Meanwhile, his girlfriend, the aforementioned Mazo, is currently riding a three-fight winning streak in the UFC after dropping her promotional debut in March 2019. Her last win was a third-round submission of Justine Kish in September, which was also her first stoppage win in three years and her first pro submission ever. Estrázulas and Mazo live a happy fighting lifestyle in sunny California.

“We both like to train all day,” said Estrázulas. “Then, when we go home. We like to take care of each other. We like to walk around the beach. We just moved to Hermosa, so it’s such a nice place.

“I live my life to fight, and so does Sabina. So, we kind of push each other in this way. Even when we are not thinking about fighting, we are healing our bodies, taking care of each other’s minds, and getting ready for the next day.”

Estrázulas has been preparing for a title fight for a long time now, and likely a lot longer than the LFA has even existed. He has watched his fellow fighters from Kings MMA have their time in the spotlight, but now he feels it’s his turn. With Dariush and Muay Thai coach Guilherme Almeida in his corner, he has a chance to earn an LFA title in front of fans viewing live on UFC Fight Pass. Call him crazy, but he’s no psycho. He’s just driven and knows what he wants.