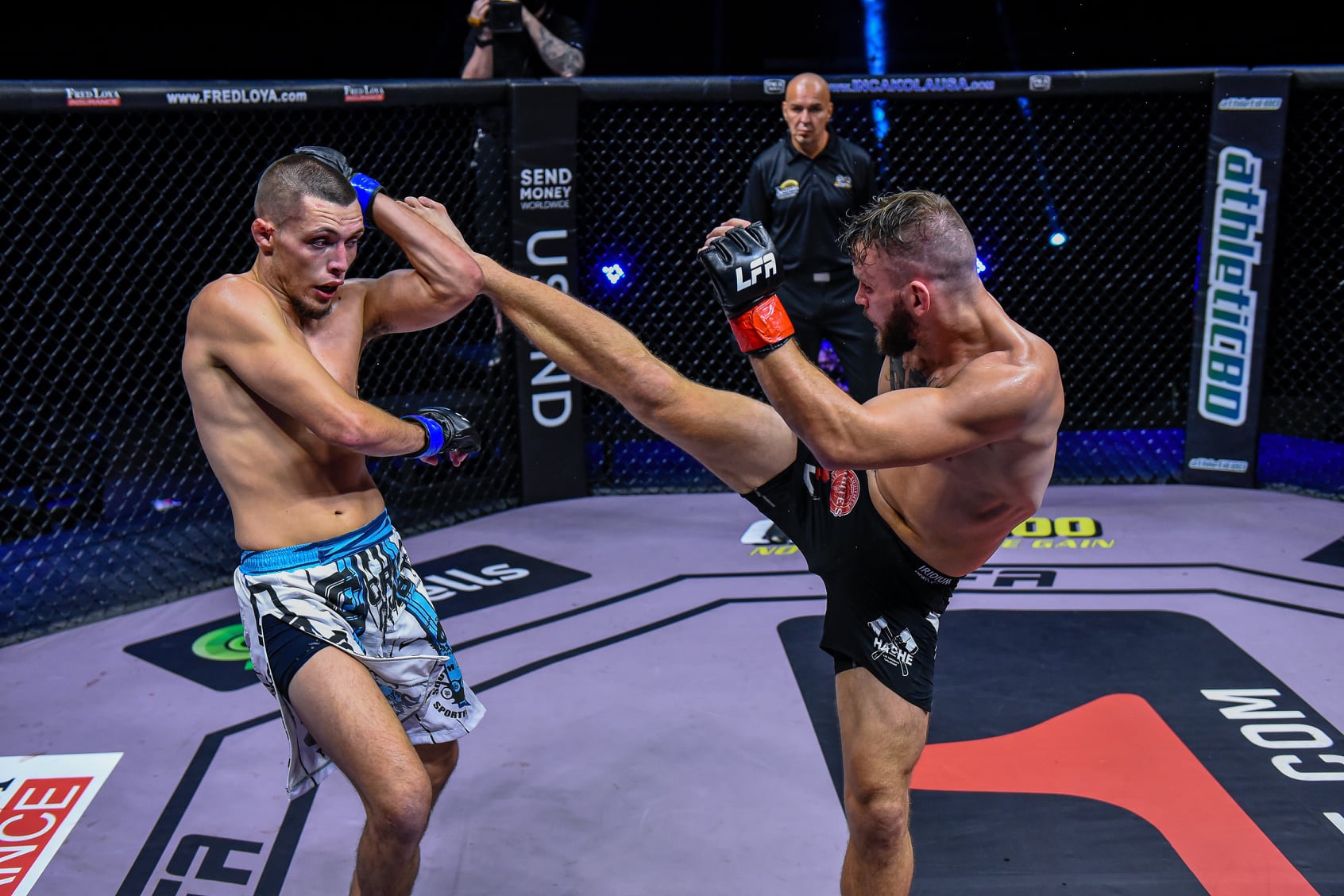 If you pay attention to other top MMA organizations outside the UFC, you may have run across a few fights of Brazil’s Arthur Estrazulas. The 12-year veteran is a well-traveled and experienced fighter that appears to be ready to get his shot at the highest level of MMA that is the UFC.

Estrazulas has a great Brazilian jiu-jitsu background, but has also made his striking more fierce in training with Kings MMA. Training under Rafael Cordeiro has obviously done wonders for Estrazulas. He has experience fighting in top organizations such as Bellator, PFL and LFA. He competed just once in early 2022, as he defeated another top prospect in Brant Moore with a one-punch knockout to the body.

Estrazulas has seemingly been on the doorstep of the UFC for a while, and, at 33 years old, his time needs to be now. His exciting style lends well to a roster run by Dana White and Co., so I think he’s ready to take it to their roster.

Making his second and final appearance in this series (and first appearance since 2019), Luiz Gustavo has spent his recent career having bangers with the RIZIN organization. He’s also been successful in doing so, which is why he needs to be brought into the competitive UFC lightweight division as soon possible.

Gustavo represents the very underrated Evolucao Thai MMA team in Brazil, who has a number of great fighters known for their violent, effective style. Gustavo is an aggressive striker who gets into his opponent’s faces quickly and does damage. After losing to Patricky “Pitbull” Freire on New Year’s Eve 2019, we had not seen Gustavo in a couple of years. He made his comeback this year and scored two ferocious knockout wins over Yusuke Yachi and Juri Ohara.

Gustavo is an animal and a guy that has the type of fighting style that Dana White loves. He would not only be a guy who hunts fight-night bonuses, but he’s a guy that can make a run of the 155-pound ladder and score some marquee fights. He first takes on Johnny Case to end 2022 at RIZIN’s New Year’s Eve show, so a win there should be enough to get him a look from the UFC.

England is home to a lot of bangers in the sport of MMA – guys who get in the cage and just look to scrap. One of those guys is George Hardwick, who has jumped onto scout’s radar in the year of 2022 with his exciting style and a marquee win over a Contender Series vet.

Hardwick is a brawler with big-time power and good hands. He also has great choking power, especially when defending takedowns with his nasty guillotine choke. 2022 was a highlight year for Hardwick. He opened the year with a nasty knee-to-punches combo that finished off Lukasz Kopera before he took on Contender Series veteran Kyle Driscoll, finishing Driscoll with a nasty body shot and follow-up ground strikes. He ended the year by putting down veteran Chris Bungard with strikes as well.

Hardwick is just 25 years old and has a nasty killer instinct, which makes him a tough out for anybody he faces. He constantly moves forward and never lets his opponent breathe. He’s the prototypical fighter that a guy like Dana White wants to have on the roster.

LFA has offered an abundance of talented fighters to the UFC over the years, and another one that should get his time in the sun is Aaron McKenzie. He’s a well-traveled vet that has proven he can beat good talent in convincing fashion.

McKenzie is an outstanding grappler with good wrestling and a very strong Brazilian jiu-jitsu pedigree. He trains under the outstanding Rafael Lovato Jr., who has obviously trained McKenzie well. His last loss was in early 2020 to top Bellator prospect Chris Gonzalez, which is nothing to be ashamed about. He’s since rattled off four wins in a row, including a dominant decision win over UFC vet Joe Giannetti. He fought just once in 2022, where he scored the LFA lightweight championship via decision over the talented Lucas Clay.

McKenzie is no rookie anymore, as he’s 34 years old, so his window is closing quickly. However, he has more than proven that he is ready to step-up to the UFC and get his shot at a run with the company, especially give his success in LFA and Bellator.

One of the bigger travesties in terms of snubs from Dana White’s Contender Series signings has to be Canada’s Anthony Romero. The 25-year-old is obviously a talented prospect who won his 2020 Contender Series bout in dominant fashion over Mike Breeden, who is now on the UFC roster (and Romero is not).

Romero is an excellent striker with diverse, impressive kicks and good boxing. He’s also a very smart and cerebral fighter, using his brain in the cage in unison with his excellent kickboxing. He did take a loss in late 2021 to fellow Contender Series vet JJ Okanovich – which many thought Romero won – but has come back with two wins in a row including a highlight-reel flying knee knockout of Kenneth Glenn in his lone fight of 2022.

Romero is a prospect the UFC should invest in, as he’s young, exciting and a Canadian fighter that the UFC can market. The UFC doesn’t have as many Canadian fighters to market to that country right now, so Romero could certainly fit that bill.