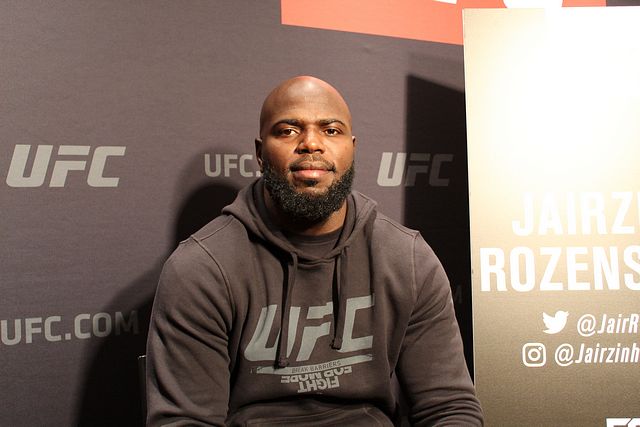 Jairzinho Rozenstruik will take on Augusto Sakai in the main event of this weekend’s UFC Fight Night card. The Surinamese fighter would like to vanquish the memory of his lackluster performance in his unanimous-decision loss to Ciryl Gane and re-establish himself as a contender. The question is whether he can achieve this goal.

Rozenstruik went into the Gane fight on the back of a second-round knockout win over former UFC heavyweight champion Junior dos Santos in August. Prior to that contest, Rozenstruik was viciously knocked out inside 20 seconds by Francis Ngannou at UFC 249.

Gane entered the contest undefeated, holding a 4-0 record inside the UFC. The pattern of the fight was set quickly, with Gane keeping Rozenstruik at a distance with his jab and wide range of kicks. Meanwhile, Rozenstruik struggled to mount any kind of offense whatsoever, and his hesitancy caused him to repeatedly back up against the cage. This was exacerbated by the fact that the bout took place inside the smaller 25-foot Octagon in the UFC Apex instead of the regular 30-foot Octagon where most fights took place before the pandemic.

On the few instances when Rozenstruik did explode off his back foot, he was nullified by the slick movement of Gane, who could easily read his intentions. Gane also maximized his height and reach advantage to great effect, parrying and controlling Rozenstruik’s patented power left hand. With his biggest weapon being negated and finding himself unable to evade the strikes coming his way, Rozenstruik looked increasingly lost as the rounds went on.

The lack of urgency that the 33-year-old showed in the fourth and fifth frames was mystifying considering that it was clear that he would need a finish to secure the victory. He seemed to be content to lose a wide unanimous decision, and that is exactly what transpired, with all three judges scoring the contest 50-45 in Gane’s favor. Rozenstruik was out-struck by a sizable margin, landing a mere 49 total strikes compared to Gane’s 128. The only sliver of positivity he could take was his improved showing on the ground, as he stuffed 12 of the 14 takedowns attempted by the Frenchman.

Rozenstruik’s performance was made to look even stranger given that he would have been close to title contention with a win due to the logjam at the top of the heavyweight division. Not many people would have foreseen Jon Jones’ contractual standoff with the UFC, but Gane is now arguably one victory away from a title shot following his triumph over Rozenstruik.

This fight highlighted the need for Rozenstruik to develop more tools to compete at the highest level. Whilst he possesses outstanding kickboxing credentials, his most potent weapon in the UFC has not been his striking technique but his incredible one-punch knockout power. The shot which sent former UFC heavyweight champ Andrei Arlovski face first into the canvas at UFC 244 did not even seem to fully connect. He also famously finished Alistair Overeem with a punch that split the Dutchman’s lip wide open, one of the most gruesome injuries seen in the sport for a long time.

Rozenstruik’s footwork was poor against Gane. This played a large part in his defeat, and not for the first time in the UFC. There was a strange element to the way the Ngannou fight played out, as the Cameroonian rendered Rozenstruik unconscious with a left hand after missing with numerous wild, lunging shots. No matter how sloppy Ngannou looked, Rozenstruik made it easier for his opponent to reach the target by moving back in a straight line as opposed to using lateral movement to evade the shots. Stipe Miocic showed in his first contest with Ngannou that it is possible with good head movement and footwork to circle away from the big strikes of arguably the hardest puncher in the history of MMA. This would have been easier said than done for “Bigi Boy” against Ngannou, but it would have given him a far better chance for victory.

If Rozenstruik manages to climb back to the top of the division, then he will likely encounter fighters against whom he will have a height and reach deficit. The power that he carries has taken him a long way, but against taller, longer athletes who are savvy to his preferred power shots, he will need to find alternative methods of being effective. The 33-year-old would benefit from implementing more kicks in his game, allowing him to bridge the height disadvantage he would face against the likes of Alexander Volkov, Curtis Blaydes, Miocic, Ngannou and Gane.

Adding finesse to his arsenal can help put Rozenstruik in a position to better utilize his devastating knockout power. Ngannou is a prime example of this, delivering a near-perfect performance against Miocic at UFC 259 by staying patient and technical before hitting big power shots in the second round to win the championship.

The American Top Team gym in Coconut Creek, Fla., is the perfect place for Rozenstruik to develop as a fighter. The Gane fight revealed that he has made great advancements in his ground game, something which had previously looked subpar. Under the tutelage of world-class coaches and with an array of elite talent to train alongside, “Bigi Boy” has a great chance to make similar strides in his stand-up game.

Rozenstruik has struggled to be consistent not just in his UFC career as a whole, but also within individual fights. In the aforementioned Overeem bout, he was taken down and controlled on the ground for large periods. When he was on his feet, he did not seem to have a way past Overeem’s high guard and threw many strikes that were blocked. To his credit, the Suriname native showed fortitude after enduring some big blows and managed to take the contest into the later rounds. Just when it seemed like he was on the verge of losing a unanimous decision, Rozenstruik dropped Overeem with a big right hand to secure the knockout with four seconds remaining. This would go down as the second latest knockout in UFC history.

This weekend, Sakai constitutes a step down in competition for Rozenstruik following his last outing inside the Octagon. The Brazilian has amassed an excellent record of five wins and only one loss in the UFC, but this is not wholly representative of how his time inside the Octagon has panned out. Sakai was finished by the aforementioned Overeem in his last fight, and many believed that he also lost to Blagoy Ivanov in a contest the judges scored in his favor by split decision. Sakai also scored a split-decision victory over Arlovski. He does not seem to have the power nor the striking technique to be able to trouble the elite heavyweights, but he is extremely durable. Therefore, this appears to be an ideal opportunity for Rozenstruik to showcase some newly honed skills.

The quality of Rozenstruik’s performance on Saturday, in addition to the result, will indicate whether he can find the consistency to be a top contender in the division. Failure to get past a man that is currently ranked ninth by the UFC would put an end to Rozenstruik’s ambitions of competing for the title any time soon. Conversely, a display that wins back fans who were frustrated with how he fought last time out will put him a step closer to the belt.