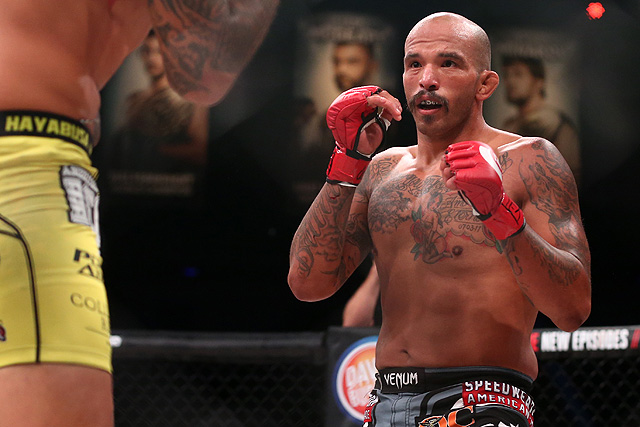 This sounds like a pretty simple life, doesn’t it? Well, it isn’t. Just ask Joey Beltran.

It’s true that “The Mexicutioner” can “train and be fat and happy,” as he told Combat Press after his decision to move back to heavyweight for his fight against Chase Gormley at Bellator 155 on May 20. Beltran, whose record sits at 17-12, just came off stints competing at light heavyweight and even middleweight. He described his weight cuts as “very tough.”

“There was meal prepping, eating every three hours on the dot, extra cardio,” Beltran said. “You think if you move down to the lighter weight classes, you can be bigger and stronger. But each weight class has a different set of challenges. The 185-pound guys are 205 pounds by fight night. The 205-pound guys are heavyweights, and the heavyweights are just huge.”

Competing at middleweight can keep a fighter from getting tired and allow them to “keep up a crazy pace,” Beltran said. But no matter what weight class a fighter competes at, “even heavyweights get tired, and that’s when you strike,” he said.

Beltran is a happier guy in general as a heavyweight, and this influenced his decision to return to the division for his fight against the 12-5 Gormley. Just ask Beltran’s family.

“I’m not as much fun to be around when I’m cutting weight,” he said. “It was really lame and boring. But I keep the same level of discipline, and if you’re a true professional, then you sack up and do it. The danger’s the same when you fight. You just make sure you don’t get caught with your dick in your hand. But if Bellator asked me if I could make 185 pounds and step in to fight [Bellator middleweight champion Rafael] Carvalho for the belt and make $500,000? Yeah, I can do it.”

Beltran’s journey across three different weight divisions is followed by the California State Athletic Commission passing several weight-cutting rules, including a ban on both using severe dehydration to cut weight and using IV to rehydrate.

Beltran trains with Davis at Alliance MMA in San Diego, which is also home to UFC bantamweight champion Dominick Cruz. Beltran counts Cruz and his UFC counterparts Nate and Nick Diaz as his favorite fighters to watch.

“Cruz was one of the first people I met when I started — we had the same manager,” Beltran said. “When Alliance started, it was just Brandon Vera and Cruz. Then Phil and I joined, and it became the monster factory it is now. It’s really cool to see it manifest the way it has.”

Beltran describes himself as more of a fan of watching certain fighters like Cruz and the Diaz brothers, as opposed to watching whole fight cards. He has enjoyed watching MMA grow in popularity the way it has over his nearly 10-year career, but there’s also a downside to it all.

“Fighters are still making pennies,” Beltran said. “Nate [Diaz] made $1 million for his fight against Conor McGregor and said he would retire, but he can’t. That’s not life-changing money. Maybe if you made a [Floyd] Mayweather purse. But this is what we signed up for. It’s not so much the promoter’s fault; they’re just trying to run their business. There are so many fighters that want our position, so we’re expendable.”

Since MMA has only seen one McGregor, Georges St-Pierre and Ronda Rousey, fighters who achieved great acclaim and financial success, Beltran advises his fellow fighters to save their money and to make sure they’re competing in MMA for the right reasons.

“You have to love this shit. It has to mean more than just getting rich,” he said.

Gormley will look to return to his winning ways after suffering a second-round knockout loss at Bellator 143 last year. Prior to that, Gormley ripped off a five-fight winning streak on the regional circuit, including capturing the Titan Fighting Championship heavyweight title.

Beltran described Gormley as a “very strong wrestler” and said he considers Gormley to be a friend. The two previously trained together and competed at freestyle wrestling tournaments in California.

“There’s no guess about what he wants to do,” Beltran said of Gormley. “He wants to take me down and smash my face in. But I’ve had big heavyweights on top of me before [and] it’s not the end of the world. I just have to make sure I get back up.”

Beltran also trained with current UFC heavyweight title hopeful Stipe Miocic, who faces Fabricio Werdum for the belt at UFC 198 on May 14. Beltran came up short in a decision loss to Miocic in 2011.

“He will do to Werdum what Cain Velasquez should have done if he had been able to fight Werdum at sea level,” Beltran said.

Velasquez lost the UFC heavyweight title to Werdum in 2015, and some speculated the elevation in Mexico City, where the fight took place, affected Velasquez’s cardio.

Beltran believes now is the perfect time to make his return to heavyweight and join Miocic in pursuing a heavyweight title of his own in Bellator.

“I have the name and the reputation. That’s why [Bellator President] Scott Coker and [matchmaker] Rich Chou keep bringing me back,” Beltran said. “When you see my name on the card, you know it’s going to be an exciting fight.”