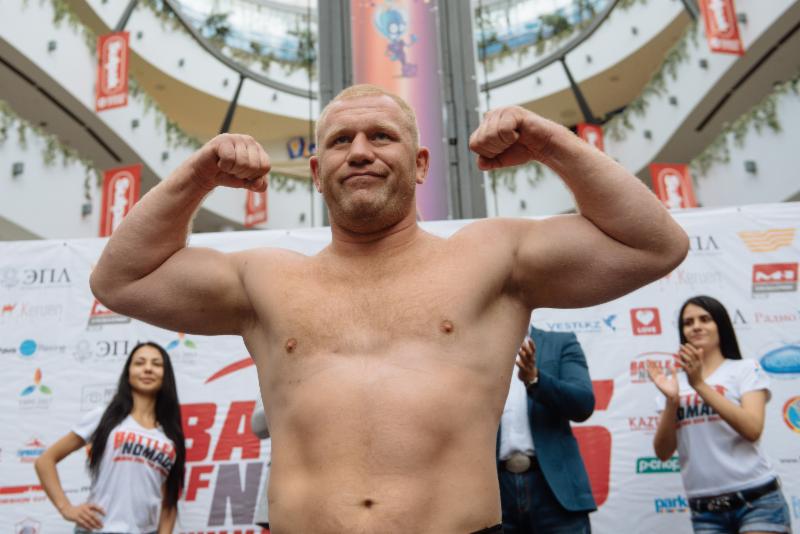 Most of the world’s best heavyweights ply their trade under the UFC banner these days, but Sergei Kharitonov is the rare exception. In fact, the Russian has never set foot inside the UFC’s Octagon. Instead, he has made stops in Dream, Strikeforce and several Russian promotions, including M-1 Global. He returns to M-1 on July 3 for M-1 Challenge 59, where he’ll engage in a rematch against Kenny Garner.

Kharitonov is one of only five men to defeat reigning UFC champ Fabricio Werdum. The veteran claimed the win via split decision nearly a decade ago at Pride 30. He hasn’t been perfect since — there have been losses to Alistair Overeem, Aleksander Emelianenko, Jeff Monson and Josh Barnett — but he avenged the loss to Overeem, defeated Andrei Arlovski under the Strikeforce banner and currently rides a four-fight winning streak into his rematch with Garner. The 34-year-old is a striker first, but his overall background is a mix of boxing, kickboxing and combat sambo. He has 12 wins by some form of knockout, but he has also added nine submission wins.

At age 40, Garner is in the twilight years of his career. He was once a 12-3 fighter whose only losses came against the likes of Tony Johnson, Chris Barnett and Guram Gugenishvili (whom Garner also defeated twice). “Deuce” hit a rough patch in 2013, though, and dropped four straight fights. He has rebounded by winning four of his last five. The only loss in that span? A TKO defeat courtesy of Kharitonov. The American Top Team product has stopped nine opponents via strikes and four by way of submission.

The pair’s last fight came in November at M-1 Challenge 53 and resulted in a third-round doctor’s stoppage TKO victory for Kharitonov. However, it wasn’t all smooth sailing for the Russian. Garner controlled Kharitonov on the ground in the first round, but gassed as the fight wore on. Kharitonov landed strikes in the second stanza that caused Garner’s eye to swell shut, and the doctor made the call to stop the fight in the third round. Garner was likely on his way to a loss on the scorecards had he been able to survive to the final bell.

Will things go much differently this time? It’s doubtful. Garner might be able to score the early takedown and secure the first round, but he’ll need to fight with a sense of urgency unless he’s upped his cardio tremendously in the last eight or so months. Once Garner fades — or if Kharitonov can keep the fight standing — the Pride veteran should start to punish Garner once more with an arsenal of knees, kicks and punches. Kharitonov will eventually add one more TKO finish to his record, but this one might not require a doctor’s involvement.

Headliner Jesse Brock has to be happy about the location of the 27th offering from the Resurrection Fighting Alliance. The 28-fight veteran gets to compete in front of a hometown crowd in Boise, Idaho, and he’ll do so as one half of a bantamweight main event that also features Joe Murphy.

Brock is probably best known for his two appearances under the Bellator banner between 2012 and 2013. Brock managed to win the second of the two fights, but he didn’t return to the promotion after the win. Instead, he fought in Vale Tudo Japan and Maximum Fighting Championship before becoming a mainstay of the Idaho-based Front Street Fights. The Combat Fitness product was a highly decorated wrestler in high school and college. He tends to be a grinder in the cage, but he does have eight submission finishes and four stoppage wins via strikes. His current four-fight winning streak is the longest of his career, but many of his streaks have been cut short by notable names, including reigning UFC flyweight champ Demetrious Johnson, Donald Cerrone and Caol Uno.

Murphy is a Cleber Jiu-Jitsu product who has a background in wrestling, judo and jiu-jitsu. He’s a strong grappler, as evidenced by his five submission wins. His RFA debut resulted in his first TKO victory, but he suffered a decision loss to Terrion Ware in his sophomore RFA outing. His resume includes notable victories over Bruno Frazatto, the victim of the TKO, and Victor Henry. His only losses came via unanimous decision against Ware and Carson Beebe.

The 27-year-old Murphy has posted some impressive performances, but he has also suffered losses to a wrestler and a striker. Brock, meanwhile, has been anything but a consistent fighter. That makes this an interesting affair where there is no clear favorite.

Murphy, despite his recent TKO victory, tends to do his best work on the mat. However, he’s going to have a hard time getting the fight to the ground against a wrestler the caliber of Brock. That may leave Murphy with little choice but to stand and bang. He’s lighter on his feet than Brock and tends to be very active with his movement. Murphy won’t be likely to just stand in front of Brock, but he also needs to avoid running in. Murphy has to keep distance to avoid the clinch or a takedown.

Brock is seemingly due for a loss after four straight wins, but Murphy might not be the man to hand it to him. After all, Beebe was able to utilize wrestling to keep Murphy on his back en route to handing the Cleber Luciano protege a loss. Brock is just as tough of a wrestler, and he hasn’t lost via submission since his 2006 defeat against the much larger Cerrone. Add in the element of a crowd that will certainly be cheering for Brock and it makes for the perfect scenario for the veteran to pull out a decision nod.

Masakatsu Ueda was an 18-2-2 bantamweight when he entered his ONE FC title fight against Bibiano Fernandes. He came up short against Fernandes and then fell in his next fight as well, leaving him at 18-4-2 and on the first two-fight skid of his career. Now, he’ll try to right the ship at Pancrase 268, where he faces fellow Bellator veteran Luis Alberto Nogueira.

Ueda’s stock has taken a tumble with his losses to the aforementioned Fernandes and Victor Henry, but this is a fighter who rose to the level of Shooto 132-pound champion during his lengthy run as a top 135-pounder. Along the way, Ueda has topped Eduardo Dantas, Kyoji Horiguchi and Kevin Belingon. His only losses came by way of a brabo choke submission against Shuichiro Katsumura and a unanimous decision against Travis Marx in Ueda’s lone Bellator outing. Ueda is a grinding decision machine who has rallied to 12 wins on the scorecards, while also posting two decision losses and two draws. Now 37 years old, the Paraestra Tokyo fighter has delivered six stoppage wins, including two by some form of knockout and four via submission.

Nogueira is a Shooto Brazil veteran who posted a 5-2 overall mark under the Bellator banner. The Brazilian’s only losses came against a trio of Bellator mainstays, one of whom defeated Nogueira before either fighter had fought in the Bellator cage. The 33-year-old Renovacao Fight Team product has 10 decision wins, but he has also posted five stoppages via strikes and four by way of submission. He is 5-0-1 over his last six fights.

These two men seem to be headed in different directions. Ueda is struggling to find the win column, whereas Nogueira continues to post win after win, with few setbacks in between. Their one commonality is their tendency to fight until the final bell. They do have a combined 15 finishes between them, but that’s out of 37 total victories.

This should be another grinding affair for both men. The fight takes place on Ueda’s home turf, but Nogueira has the momentum and youth in his favor. The Brazilian is going to threaten Ueda with submissions when they hit the canvas. He’s going to have a hard time finishing anything, but his efforts will eventually pay off. Nogueira by late submission.