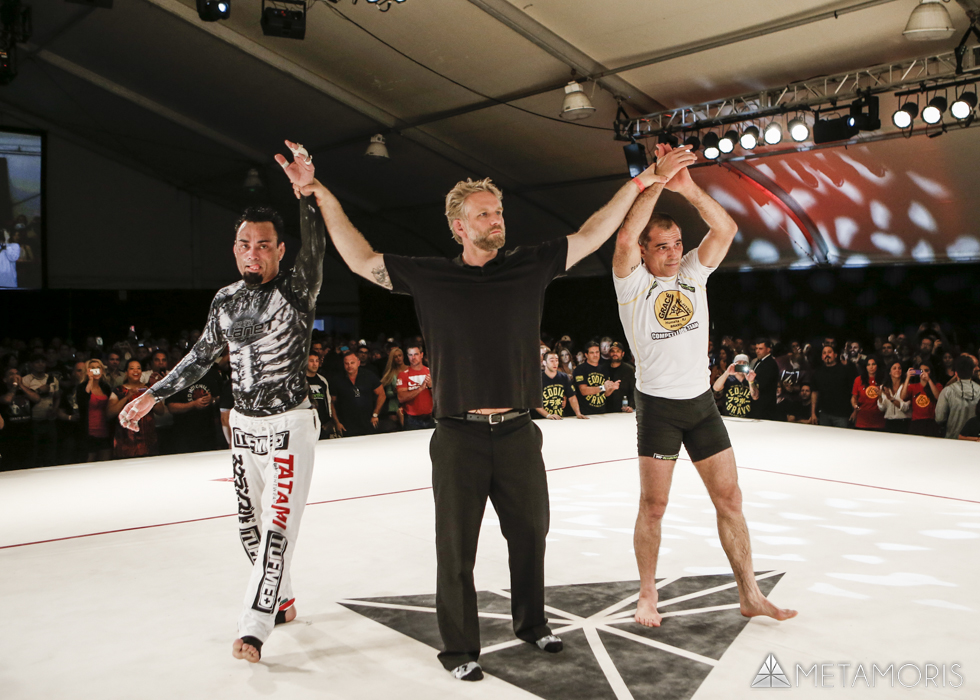 Metamoris: Can It Become the Go-To Place for the Grappling Elite?

The UFC is king of the mountain in the world of MMA, but the upstart Metamoris promotion is quickly becoming a top draw in the grappling world. Sure, there will always be tournaments like the World Championships or Abu Dhabi Combat Club events, but Metamoris has brought some measure of freshness to not only the intended demographic of grappling specialists, but also to the world of MMA.

Founded by Ralek Gracie of the famed Gracie family, Metamoris already began with some level of credibility. The promotion’s first few events flew under the radar for those outside the grappling sphere, but it was at Metamoris III that the promotion gained attention from combat sports fans worldwide.

The Metamoris III card featured a number of grappling standouts, but it was the main event between Royler Gracie and Eddie Bravo that drew in the eyeballs. Ever since the quarterfinals of the 2003 ADCC competition, Bravo had been using his upset win over Royler to promote his 10th Planet Jiu Jitsu system. The upset was one of the biggest in jiu-jitsu history. It shook the grappling world. Any questions about Bravo’s 10th Planet System were resoundingly answered with Bravo’s win over Royler. Of course, Bravo would go on to lose in the semifinals and in the bronze match, but everyone remembers Bravo’s win over Royler.

Royler and Bravo exchanged numerous verbal attacks in the promotional build-up to their climatic rematch, which only helped add buzz to the event. The rematch was supposed to finally answer the question everyone had been asking since 2003: was Bravo’s win a fluke? The actual rematch was interesting, with both men looking to take control of the match. The two men fought to a draw, but most considered this a win for Bravo, given that he’d shown his method of grappling was more than capable of hanging with the much-heralded Gracie jiu-jitsu.

But the rivalry between Bravo and the Gracie clan only seemed to intensify with the Metamoris III result. The Gracies are notoriously proud of their family heritage, and it seemed that their inability to keep Bravo and his 10th Planet System suppressed angered some Gracie family members. Recently, Royce Gracie even said if Bravo tried to use his famed rubber guard that Royce would simply punch him in the face. The two men had already had an encounter following Bravo’s Metamoris III match against Royler.

With its fourth event, Metamoris was able to follow up on the momentum it gained from the Gracie/Bravo feud and the Bravo/Royler rematch. The card was headlined by the Metamoris debut of one of the most polarizing figures in MMA history, Chael Sonnen. Fresh off a suspension, Sonnen brought intrigue to the event. The question was not only how Sonnen would perform, but even if the former title contender would make it onto the mats. Sonnen did compete and, although he lost, he hardly embarrassed himself going up against Andre Galvao, one of the top grapplers in the game today. Outside of the Sonnen/Galvao storyline, the event also featured MMA pioneers Josh Barnett and Dean Lister facing off in a match that featured a spectacular finish where Barnett tapped Lister in the waning moments. Notable MMA fighter Vinny Magalhaes was also on the card, as was an old-school showdown between Saul Ribeiro and Rodrigo “Comprido” Medeiros. Put simply, Metamoris IV featured the perfect mesh of MMA competitors and grappling stars.

The promotion is looking to replicate that success with its fifth card, which is set to feature future UFC welterweight title contender Rory MacDonald and another rematch that’s full of history. The rematch features Kazushi Sakuraba, who earned his moniker “The Gracie Hunter” after defeating the aforementioned Royler, Royce and other members of the Gracie family, including his Metamoris V opponent, Renzo Gracie. Sakuraba is a certified legend in the sport of MMA and Renzo is among the more popular figures in MMA. These two legends may be well past their primes, but it’s a battle that has an intriguing history—Sakuraba tapped out Renzo at Pride 10—to make it feel important. MacDonald will face a stiff test in Jonathan “JT” Torres, a grappler who has a trophy case overflowing with medals.

Metamoris represents a great introduction for MMA fans into the world of grappling. It’s not too technical in terms of understanding how to win—there are no points, only submissions or matches that end when the clock runs out—and the events typically feature guys who are known to most MMA fans.

Metamoris has enjoyed success in a short amount of time, but it will face a dangerous task of maintaining the aspect of sport as it seeks to court a larger audience. Bringing in known MMA fighters is a good idea, but can Metamoris continue to stack its lineups and draw interest at a consistent rate? If it can’t, interest in the organization might fizzle. With that said, the promotion doesn’t have a lot of events, therefore allowing it to stack the shows it does put on.

It will be interesting to see if Metamoris keeps using the pay-per-view streaming method or if it will look to expand its media platform. There’s probably not enough interest in watching grappling matches on cable television, but perhaps Metamoris can pair up with the UFC and utilize the UFC Fight Pass digital subscription network to reach a broader audience. Regardless of what platform Metamoris uses to showcase the stars of grappling, one would assume that anyone who’s a fan of combat sports is sure to tune in.