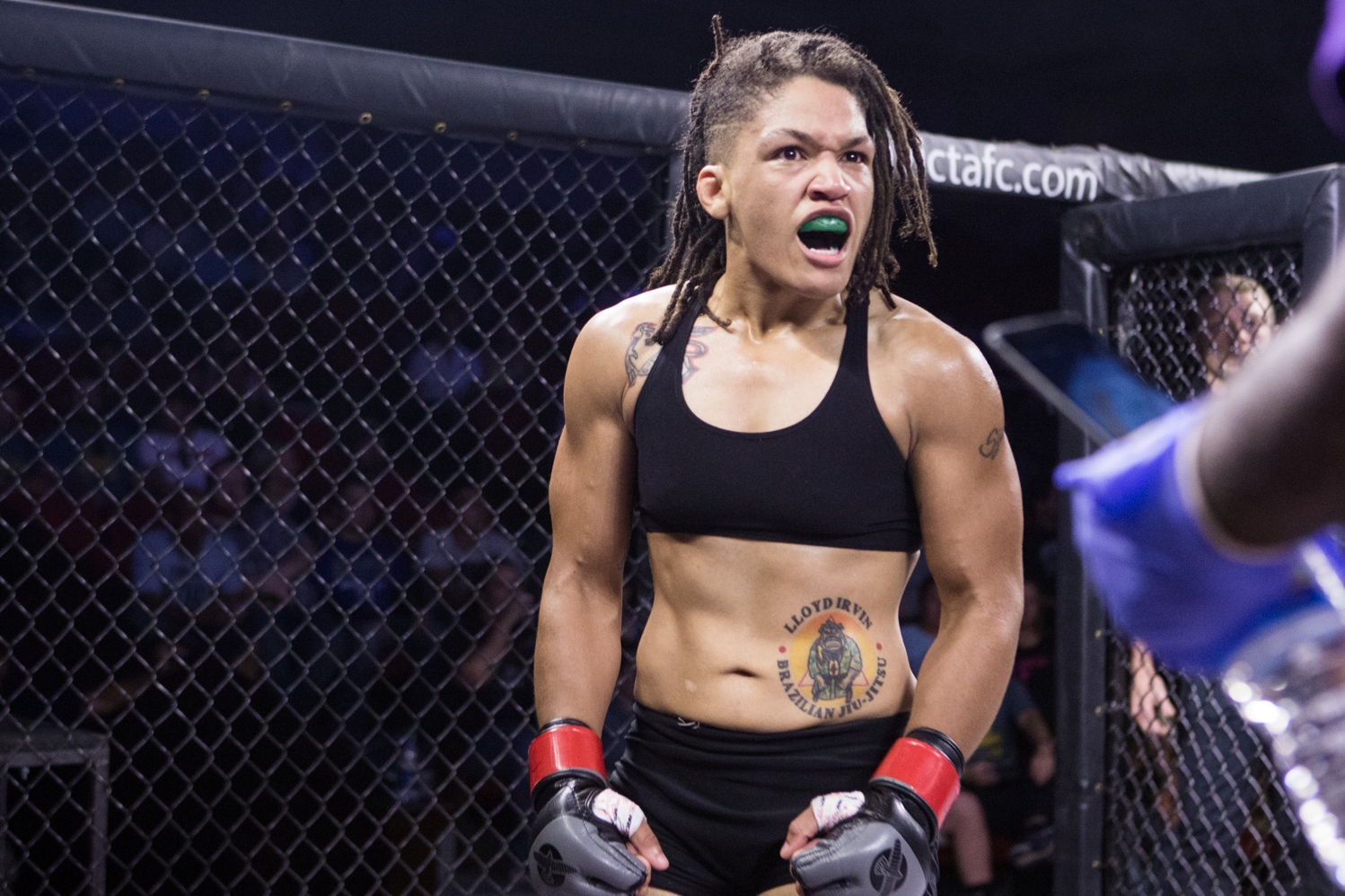 It’s only natural for a fighter to feel some jitters when she steps into the cage for the first time after a long layoff. This ended up being the case for Invicta bantamweight Sijara Eubanks.

Eubanks, who holds a 2-1 mark, recently made her return to Invicta. She scored a first-round TKO victory over Amberlynn Orr at Invicta FC 18 in July. It was Eubank’s first fight since October 2015, and her first bout in Invicta since April of the same year. Her win against Orr wasn’t her first taste of competition in nearly a year, however. She had competed in a jiu-jitsu tournament in October as well.

“I felt good and really excited,” Eubanks told Combat Press about her fight with Orr. “I studied Amberlynn and created a really good game plan. I had some jitters at first and I went to the stand-up a little more than I wanted, but then I saw the opportunity for going to the ground.”

Eubanks exchanged some strikes with Orr early in their fight before she took Orr to the mat and executed some vicious ground-and-pound for the first-round stoppage.

“My strengths are on the ground, and I love ground-and-pound,” Eubanks said. “But I’ve been working on my stand-up game lately, mostly with my kicks.”

Eubanks hones her stand-up skills and her overall game as an MMA fighter at Team Lloyd Irvin in Camp Springs, Md. Eubanks played basketball and took part in martial arts growing up. She even played tennis at Morgan State University in Maryland. However, it wasn’t until she was in her 20s that she became serious about competing in mixed martial arts.

“I wasn’t much of an athlete growing up,” Eubanks said. “When I was around 22 or 23, I started doing kickboxing for cardio and then I found out about jiu-jitsu through word of mouth. I used to watch UFC Unleashed, so I went to Lloyd Irvin’s gym and just did it for fun, but I became really good at it.”

At the time Eubanks started to compete, she was still working a full-time office job.

“But it was the worst job I ever had,” she said. “I got the bug and wanted to do MMA full-time.”

Eubanks made his professional debut in April 2015 at Invicta FC 12, where she defeated Gina Begley by first-round TKO. Although she competes at bantamweight, Eubanks took her second professional fight for Cage Fury Fighting Championships (CFFC) at flyweight and lost a unanimous decision to Katlyn Chookagian, who recently won her UFC debut.

“The weight cut was a lot tougher than I thought,” Eubanks said of her fight against Chookagian. “I’m definitely more comfortable at 135 [pounds].”

Eubanks is at home under the Invicta banner. She’s happy to be there, too.

“Shannon [Knapp, Invicta president] is giving women a home to compete as professionals,” said Eubanks. “There’s good talent and good fighters here, and Invicta is providing an environment to showcase what we can do.

“It’s so freaking cool [to have Invicta broadcast on UFC Fight Pass], even if most of my family and friends don’t know the difference between UFC and MMA.”

Eubanks is still enjoying her victory over Orr, but she is looking forward to her next fight for Invicta.

“I have a few ideas, but it’s up to my coaches and management, and Shannon,” Eubanks said. “I know my coaches will take care of it.”

In the meantime, Eubanks will continue climbing the ladder in hopes of making it to the UFC, where she would like to make her mark in a women’s bantamweight division that is very much in a state of flux in the midst of a third straight title change where Amanda Nunes dethroned former champion Miesha Tate to win the belt at UFC 200 last month.

“That belt really is hopping around and being passed to the next contender,” Eubanks said. “I think Valentina [Shevchenko] should be next in line, and have Holly [Holm] and Miesha fight again. Even though I’ll be knocking out the girls in the next few years, I think Holly will turn it around and get back on track.”

Maybe one day, Eubanks will get to experience the jitters that come with an Octagon debut. For now, though, she’ll keep on pushing opponents to their limits as a member of the Invicta roster.