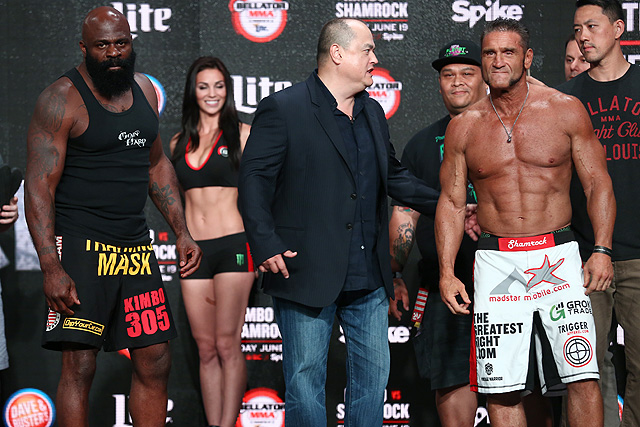 Kimbo Slice vs. Ken Shamrock Can Be a Boon for Bellator MMA and Spike TV

When you hear there’s going to be a fight card on free television where the main event features a 51-year-old former professional wrestler against a 41-year-old backyard brawler who became famous on YouTube, you might think that card’s title was “The Best of Bumfights.”

Actually, it’s the main event of Bellator 138, with Ken Shamrock taking on Kimbo Slice. This fight has been met with derision in certain circles, including by my esteemed colleague here at Combat Press. Their belief is that the fight between Shamrock and Slice is a short-sighted decision that trades a brief boost in ratings for long-term damage to Bellator’s credibility and chances to become a legitimate mixed martial arts organization, on par with the UFC.

Nothing could be further from the truth. First off, yes, ratings for Bellator 138 will get a boost from this main event. The same thing happened when Tito Ortiz faced Stephan Bonnar at Bellator 131 last year in a fight many also declared was between two has-beens. That event averaged 1.2 million viewers — Bellator’s most successful card to date. Isn’t the whole point of putting on a fight card to get people to watch it?

Whether you want to admit it or not, Kimbo and Shamrock are both proven draws:

I vividly remember being out with friends at a club in Washington, D.C., the night Slice fought James Thompson in EliteXC. People there had no reason to watch Slice pulverize Thompson’s cauliflower ear. But when it came time for that fight, people stopped dancing and came to the bar to watch. The curiosity and hype surrounding Slice was enough for complete strangers who probably never heard of MMA to tune in, thus exposing the sport to a whole new audience.

The other argument against Shamrock and Slice headlining Bellator 138 is that it takes the attention away from more talented, deserving fighters like Michael Chandler, Patricio “Pitbull” Freire and Daniel Straus, who are also competing on the card. There’s no question those guys are supremely talented and among the top of their respective weight classes, but, frankly, those guys don’t draw on their own.

That’s not a bad thing, though, in this scenario. Chandler fought Will Brooks for Bellator’s lightweight title on the Ortiz/Bonnar card and put on a tremendous fight. Would as many people have tuned in to that card and saw that great performance by Brooks and Chandler if Ortiz/Bonnar wasn’t the main event? Possible, but unlikely.

Let me use another analogy. The main event of Slice/Shamrock is the sizzle. It’s that sound you hear when you’re at your favorite Tex-Mex restaurant and the waiter is bringing you a platter of fajitas. That sound. That smell. It whets your appetite. Fighters like Chandler, Freire and Straus are the steak of Bellator 138, the meat. They’re the proven commodities who will get to perform in front of a larger audience who may not have tuned in otherwise, and those guys have an opportunity to turn casual viewers who only want to see Slice and Shamrock pummel each other into new, permanent MMA fans.

Slice and Shamrock have brought an unmistakable buzz to Bellator 138, and only the purest of the pure MMA fans seem to not be happy those two are in the main event. The vast majority of fans, from the most jaded, cynical journalist who covers the sport to the guy who just learned about Bellator’s existence because he saw a commercial for the Slice/Shamrock fight on TV, are excited to tune in.

Will Slice/Shamrock be a technical masterpiece, akin to the first fight between Georges St-Pierre and B.J. Penn? No. It will likely be a sloppy brawl reminiscent of MMA’s early days. But if the guys on the undercard play their part, the attention generated by Slice vs. Shamrock could catapult Bellator to another level.