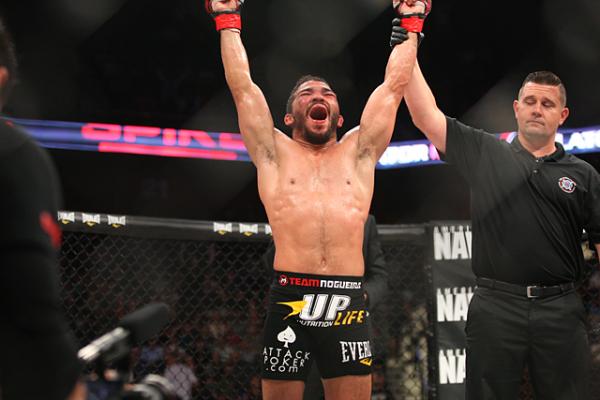 Slice’s signing stirred up a lot of buzz, coming right on the heels of the buzz generated by the announcement that pro-wrestling superstar CM Punk was headed to the UFC. Bellator has a lot of buzzworthy, ex-UFC fighters that have seen better days. Now, Slice joins their ranks. And that’s all well and good, but the problem comes in his placement on the card.

Slice and Shamrock were originally slated to fight many, many moons ago in the EliteXC cage before a cut forced Shamrock out of the fight on the day of the event. The show went on, of course, and Seth Petruzelli stepped in for Shamrock. It now lives in infamy as the day Slice’s hype train went fully off the tracks. Slice was knocked out rather quickly by Petruzelli. Petruzelli wasn’t expected to win by those who barely knew the sport at the time. However, anybody in the know might say it seemed rather obvious.

I’ll admit that I’m one of the bandwagon fans who started following MMA after Slice, the YouTube backyard fighter, signed and first fought for EliteXC. It was during 2007 that I was first watching the sport in my sophomore year of high school. Slice was arguably the coolest guy to watch. (Well, there was Gina Carano, too, but for more obvious reasons related to a teenage boy’s interests.)

Now, Slice, along with Shamrock, takes headlining status on Bellator 138 over the likes of the featherweight title fight between Patricio Freire and Georgi Karakhanyan. What should be a great fight between two guys coming off of impressive performances is taking backseat to two guys who haven’t even seen the cage in five years.

This isn’t the first time Bellator has gone this route. Last year, Tito Ortiz and Stephan Bonnar took headlining status over a lightweight title fight between interim champion Will Brooks and challenger Michael Chandler. On paper, that lightweight championship tilt was more interesting than this featherweight title fight, but both title contests qualify as something worth watching.

Bellator is once again choosing the big-name, casual-fan draw over the likes of showcasing its champions as those fighters put their belts on the line. From Bellator’s standpoint, sure, it’s going to draw in more casual fans who might not have seen the sport otherwise. Slice is still a draw after all. Just look at the people still talking about his return.

Bellator is starved for stars in its ranks. The company doesn’t have anyone that makes fans go, “Hey, that’s a fight I want to see because fighter X is amazing!” The promotion had that in Michael Chandler, but he hasn’t won a fight in the last two years and has stagnated in his development as a top-10 or top-15 lightweight. It also had it when Eddie Alvarez was around. Now, however, the role is falling not to the champions or the up-and-comers. Instead, it goes to fighters whose most notable accomplishments occurred in a previous decade.

Bellator faces a language barrier that makes Freire a difficult sell to the American public. Even Karakhanyan, a fighter who has been one of the best featherweights outside the UFC, isn’t really considered to be a draw. Yet, what’s to blame for that problem? These guys have the skills. However, they have not had the promotional push necessary to insert them into the consciousness of the casual fan.

Right now, when people discuss Bellator, they ponder over the possibilities for the next big freakshow fight. In the eyes of some fans, this is beginning to resemble some odd UFC retirement program too. Bellator actually puts on some great fights, but the stigma of these freakshow contests will be hard to shake if the company doesn’t have the stars waiting in the wings to carry the torch once these current, aging stars inevitably retire. Eventually Shamrock, at age 51, will call it quits. Ortiz will eventually retire. So, too, will Kimbo Slice. Those are just three guys, and it wouldn’t be a struggle to go on and on with naming more fighters who are at an age where retirement is closing in.

There will be more eyeballs on Bellator’s event as fans tune in to see Slice take on the legendary Shamrock. They might even tune in for the whole card instead of just that one fight. However, it all adds up to short-term success. Bellator doesn’t have to worry about the ratings for this event. However, it might want to consider its reputation and the long-term impact of its choices.