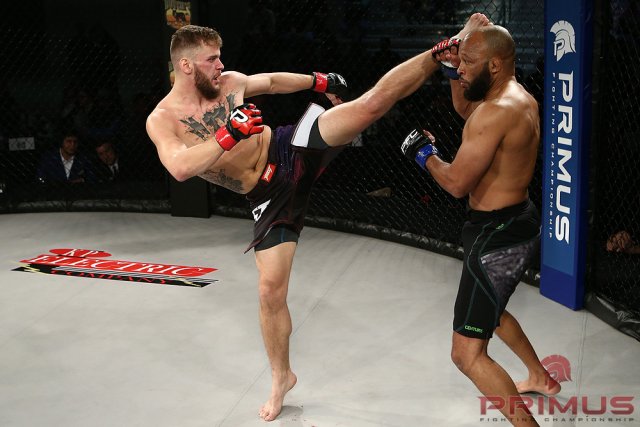 It all begins here, from the small convention centers and high school gymnasiums to the developmental leagues that serve as a launching pad to the big show. It all begins with events like LFA 104, ReciFight 6 and Open FC 3.

The Legacy Fighting Alliance returns with its 104th effort on Friday night. The event takes place in Oklahoma and features a pair of local lightweights in the headliner when Aaron McKenzie squares off with Brandon Phillips.

The 32-year-old McKenzie is a native of Oklahoma who trains under the tutelage of Rafael Lovato Jr. He made his pro debut in 2015 and stopped his first four opponents. After a setback against Dawond Pickney and a split draw in his next appearance, McKenzie kicked off another three-fight winning streak full of stoppages. He peaked with a submission of Sean Clements at Bellator 233, but dropped a split decision to Chris Gonzalez in his next outing with the promotion at Bellator 239. McKenzie then jumped to the LFA, where he has now won two in a row. His first victory came by way of a first-round submission of Gláucio Eliziário. He then worked his way to a unanimous nod over Joe Giannetti. McKenzie is a very balanced fighter who has four knockout finishes and four submissions on his record.

The 31-year-old Phillips was born in Kansas, but he now resides in Oklahoma. The American Top Team OKC representative went 14-2 as an amateur before switching gears and becoming a pro in 2013. He won his first three fights before running into Ray Wood, who outworked Phillips to take the win on the scorecards. Phillips then made his Bellator debut with a decision victory over Chuka Willis at Bellator 159. This led to a pair of fights in which Phillips was severely overmatched by his opponents. First, he ventured to the World Series of Fighting, where he was submitted by Bryce Mitchell. Next, he returned to Bellator and suffered a decision loss to AJ McKee. Phillips has since added two more wins to his record, including one inside the Bellator cage against Jordan Howard. However, he has not seen MMA action since 2018.

Phillips has split his time in combat sports between MMA, boxing and kickboxing. He has gone just 1-3 in the sweet science, and his lone win was a split decision. Meanwhile, he has fared better as a kickboxer, sporting a 3-2 mark according to BoxRec. In MMA, he has shown promise. Losses to Mitchell, who is now undefeated through five UFC appearances, and McKee, who remains undefeated through 17 fights and is now a Bellator title contender, are completely forgivable. Wood was even a strong prospect when he edged Phillips.

McKenzie’s strength of schedule lacks the same level of competition that Phillips has encountered. His first loss came to a 13-9 veteran in Pickney. Gonzalez, who delivered his second setback, was just 3-0 at the time, but does stand as the one stud on McKenzie’s resume. Nichols, who fought to a draw with McKenzie, was just 3-1 at the time and remains a modest 7-2-1. Meanwhile, McKenzie’s most notable win was his decision nod over Giannetti.

McKenzie has been a slow starter in his LFA campaign. He was rattled by Eliziário and nearly finished in that fight, but he showed a lot of heart in weathering the early storm and turning the tide to get the submission before the end of the round. In the Giannetti fight, he demonstrated his ability to survive on the mat despite Giannetti’s numerous choke attempts. The Oklahoma native can be tagged on the feet and presumably outboxed, but his well-rounded skill set and the expert coaching of Lovato allow him to stay in the fight even when he’s faced with adversity.

Phillips is a tough competitor, but a combination of ring rust and the size he’ll give up to McKenzie could prove to be his downfall. He’s relatively easy to take down, but he’s difficult to keep on the mat. Even the aforementioned Mitchell, a superior grappler, initially struggled to keep Phillips grounded. Ultimately, though, fighters like Wood and Mitchell were able to get the better of Phillips. McKenzie could do the same.

McKenzie will tower over Phillips by five inches, and he should be able to stay out of range of Phillips’ strikes. Meanwhile, he’ll repeatedly take down Phillips. This grinding approach should work to tire Phillips, who hasn’t had to wrestle in fights for the last two and a half years. McKenzie will continue this approach until he finds the submission or hears the final bell. Either way, he’ll have his hand raised following another strong showing.

Brazil’s ReciFight series is back with its sixth edition. The show was to include a pair of contests to determine new champions, but the bantamweight clash between undefeated upstart Daniel Oliveira and 11-fight veteran Ericsson Ferreira was scrapped at the last moment. This leaves the heavyweights: Danilo Suzart and Maicon Douglas.

Suzart, 30, has been competing as a pro since 2018. The big man has a solid finishing rate, but he has primarily fought low-level competition. His most accomplished foe was 4-2 at the time of their meeting, and he’s also topped two rookies, a winless opponent, and a fighter with a losing record. Suzart tends to get the job done with his fists.

The 28-year-old Douglas has had more mixed results since his 2015 pro debut. “Mamute” lost his first outing, but he bounced back to win his next four fights. He stepped up in competition to meet the 16-1 Fabio Aguiar in late 2018 and suffered a knockout loss. His next appearance ended in disappointment as well, with Douglas emerging on the wrong end of a split decision. He has since recovered with two victories, but he has not fought since late 2019.

Suzart has a bulky frame, even by heavyweight standards. He has excellent balance and takedown defense. He bullies opponents in the clinch and uses his leverage to avoid getting put on the canvas. He’s been able to finish rookies in the first round, but usually needs more than a round against experienced foes.

Douglas is the most experienced fighter that Suzart has encountered thus far in his career. However, “Mamute” also fits the profile as the type of mediocre talent that Suzart has fed on throughout his career. Douglas has already fallen via knockout, and he’s lost to both a rookie and a 3-2 fighter.

Suzart should continue his undefeated run while adding some gold to his collection. He’ll be the taller fighter in this one, and his size will be tough for Douglas to handle. It won’t be a pretty fight, but it should end with a finish via strikes for Suzart.

Russia is the setting for our third featured event this week. Open Fighting Championship hosts its third show. The card includes a number of intriguing heavyweights. Among them, UFC veteran Luis Henrique has a chance to claim a belt when he clashes with Aleksandr Maslov.

The 27-year-old Henrique is the most recognizable name in this week’s preview thanks to his time inside the Octagon. The Brazilian, who debuted in 2011, compiled an 8-1 mark on the regional circuit before joining the UFC for a promotional debut against Francis Ngannou. Of course, Henrique did not fare well. He rebounded, however, with a pair of submission wins in the organization. After back-to-back losses to Marcin Tybura and Arjan Bhullar, “KLB” spent a year on the sidelines and then moved to light heavyweight, where he fell to Ryan Spann. This led to his departure from the UFC. Henrique has since gone 3-1 while only losing in a bid to unseat fellow UFC castoff Phil De Fries for the KSW heavyweight throne.

Maslov, who is also 27 years old, made his pro debut in late 2017. He scored first-round finishes of his first three opponents, including Cody East and Wallyson Carvalho. After suffering a decision loss to Elkhan Musaev in his first fight of 2020, Maslov rebounded with another three first-round stoppages. The Russian is a vicious striker who now has six knockouts on his resume.

Henrique demonstrated in KSW that he’s barely a level below the UFC. He pushed De Fries the distance and almost emerged with the title. The Brazilian is a threat on the ground, where he has tallied seven submissions. However, he’s also prone to the knockout, as evidenced in the outcomes of his fights with Sultan Aliev, Ngannou and Tybura.

Maslov isn’t a one-dimensional knockout artist. He is a patient striker who can also survive in bad positions on the ground and find reversals. His power is evident both on the feet and in ground-and-pound barrages. If Henrique can’t keep him planted on his back, then it’s going to be a rough night for the Brazilian.

Maslov’s history of wins against very experienced opponents from the onset of his career is enough to suggest that he’s the real deal. Henrique serves as a huge test for the Russian. The Brazilian’s experience against some of the best in the world could prove to be too much for the rising prospect. However, if Maslov can score the knockout, which is a true possibility, then he could land in a major promotion very soon.

The bout between undefeated prospects Bakytov and Mustafaev was scrapped. Instead, Mustafaev fought and lost to Aibek Nurseit, who entered the bout with a mediocre 4-3-1 mark…Wilkinson needed just 82 seconds to destroy Almeida with strikes. The finish came via hammerfists when Almeida shot in for a takedown…Abbasaov demonstrated strong takedown defense and kept Amirov’s offense to a minimum. Abbasov’s looping punches started landing with more frequency as Amirov tired, eventually leading to a third-round TKO for Abbasov…”Best of the Rest” selections Maciej Różański and Rodrigo Duarte notched decision victories.