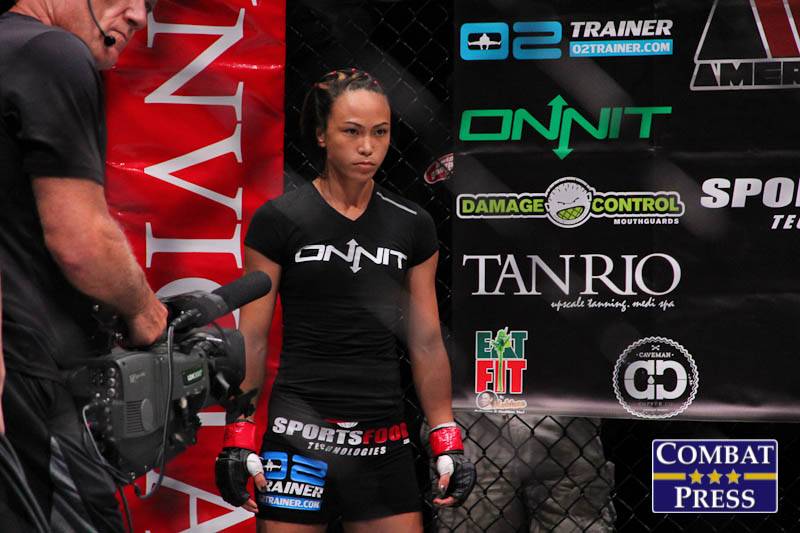 As the women in the UFC’s strawweight division jockey for position in a title picture with no clear pecking order, the UFC keeps making things interesting by throwing more and more bodies into the mix. While many fans expected the best of the 16 women they watched on The Ultimate Fighter 20 last year to end up as the stars of the division, it’s the fighters that weren’t on the reality show that have made a difference thus far.

New champion Joanna Jędrzejczyk looked fantastic in her beatdown of Carla Esparza to take the belt earlier this year, and she’s already being seen as a potential breadwinner for the promotion, especially in Europe where the Polish native has a little bit of a hometown advantage.

Then, there’s 21-year-old Paige VanZant, who is getting compared to Conor McGregor by UFC President Dana White in terms of the amount of hype behind her. With her big win over Felice Herrig on national television, VanZant silenced critics that said she was just a pretty face.

There’s also Maryna Moroz, who walked into the Octagon a few weeks ago and made her UFC debut at just 23 years old. She ended up tapping out Joanne Calderwood, the woman many thought would be the next challenger for the championship, in the first round.

The top of the division isn’t quite what fans expected coming out of The Ultimate Fighter last year, and things just became even more cluttered near the top with the addition of former Invicta FC atomweight champion and fan-favorite Michelle Waterson.

Waterson is one of the most popular women in the sport, and she was arguably the second biggest name on the Invicta roster outside of Cristiane “Cyborg” Justino before jumping up a weight class to compete inside the Octagon. Although she’s coming off the loss of her 105-pound Invicta title in her last outing, Waterson brings a fun mixture of skill and star power to a division that has had a lot of eyes on it as of late. Fan interest in the UFC’s newest weight class is definitely high right now, and as we cross our fingers hoping for another Ronda Rousey to appear, it’s nice to have fighters with an established fan base, such as Waterson, thrown into the mix.

“The Karate Hottie” has a sizable and vocal group of fans that will do their best to make sure she gets the attention she deserves when she makes her UFC debut. The Greg Jackson product’s fighting style is what will make her one of the standouts in a division full of fighters looking to break through the glass ceiling. Over the last few years, Waterson has established herself as one of the most entertaining fighters in all of MMA, male or female, and if there’s one thing we can be sure of during her time in the UFC, it is that she’s going to bring the fight to everyone she competes against and gain a bunch of fans in the process.

However, Waterson obviously isn’t just making the move to the Octagon in order to gain a few more fans. After proving she’s a championship-caliber competitor during her time in Invicta and earning a win over current top-five strawweight Jessica Penne during that stretch, “The Karate Hottie” is going to be gunning for UFC gold. She has a legitimate chance at making that dream a reality, too, if she is put on the right path to the belt. Against the right opponents, Waterson is going to be a force to be reckoned with. Her striking is very clean and fun to watch, and her ability to catch opponents with submissions while put in any position on the ground is maybe the strongest part of her game.

Skill for skill, Waterson is one of the elite fighters in the division, but it’s her lack of size that could prevent her from being the title contender she’ll be expected to be going forward.

While she may be fighting an uphill battle against a superior striker with size (like champion Jędrzejczyk) if she can’t get the fight to the floor, it’s what happens if the natural 105er ends up with someone like Claudia Gadelha or Carla Esparza looking to take her down and stick to her like glue that should worry fans of “The Karate Hottie.” Even though Waterson’s ability to pull off remarkable submissions is second to none, she’s going to need to either develop some amazing takedown defense or add some size if she’s going to compete with some of the behemoths of the division like Gadelha, who’s been rumored to walk around as high as 140 pounds in between fights.

As the UFC commentary booth loves to say, styles make fights, and there’s one style of fighter that sticks out like a sore thumb when assessing Waterson’s chances at winning UFC gold: grinders. At 5-foot-3, Waterson isn’t especially short for the division and is actually taller than some of her counterparts like Esparza and Tecia Torres, but Waterson never looked like a big fighter at atomweight and may end up getting a bit overpowered at times at 115. In the past, Waterson has been able to use her fantastic offensive game off of her back to compensate for her sometimes questionable takedown defense, but it’s going to be much tougher to hit sweeps and reversals on the mat with heavier opponents looking to stifle her creative guard. Against fighters like Esparza, who thrive when they get into top position and start fatiguing their opponents with their pressure and control, Waterson could be in for a long night of fighting for submissions and watching the likelihood of one landing decrease by the minute.

The funny thing is, even though Waterson has a huge question mark surrounding her ability to overcome a larger, stronger opponent, it wouldn’t be the least bit surprising to see her in a UFC title bout before she actually has to fight someone who could exploit those weaknesses. Again, styles make fights, and no one knows that better than the UFC brass, who also know that Waterson is already one of the biggest stars in the division before stepping foot in the Octagon. It would be pretty surprising to see “The Karate Hottie” in an unfavorable match-up in her first fight or two, and due to the wide-open nature of the division, it’s entirely possible that a fight or two is all Waterson is going to need before getting a title bout.

All in all, signing Waterson was a major win for the UFC and its newest division regardless of how well Waterson does in the win-loss column. There’s little doubt that the UFC just added a fighter who immediately became one of the two or three most popular women in her weight class. Due to her fighting style and overall personality, Waterson’s popularity seems likely to continue to grow. The fact that “The Karate Hottie” is going to be a legitimate title contender from the jump and could easily be fast tracked to a title shot under the right circumstances is just icing on the cake. Adding Waterson into the mix represents a major win for the UFC and women’s MMA on the highest level. She isn’t Ronda Rousey, but Waterson just instantly became one of the faces of the strawweight division.