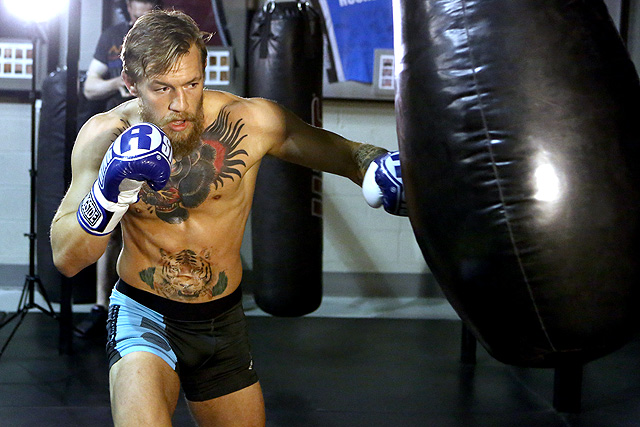 Training or Promoting: Which Craft Should UFC Champion Conor McGregor Focus On?

If you’ve been keeping up with the UFC for the last three-plus years, then you’ve heard the name Conor McGregor. He’s been in plenty of promotional clips, and every single headline has raised his stock, along with the UFC’s, about a million times over.

From his 2013 prelim debut all the way back in Stockholm, Sweden, which was at a time when some fights were actually being shown for free on Facebook, to his sudden and shocking 13-second knockout of José Aldo, the longest-reigning (and only) featherweight champion in UFC history, the brash Irishman has done it all. The more he came out victorious, the more he would realize that he was a walking, talking promoter for not only himself and the company, but the entire sport.

It even got to a point where McGregor was profiled as a coach on The Ultimate Fighter, where he showed a unique training style. This was displayed on several episodes of UFC Embedded, as well. With all these different things working in his favor, McGregor seemed poised to take over the MMA world, and possibly take all of the sports world with him, too.

However, the 27-year old hit a pretty big speed bump on March 5, 2016, at UFC 196. The speed bump came in the form of welterweight standout Nate Diaz, who defeated McGregor via rear-naked choke in front of a packed crowd at the MGM Grand in Las Vegas. Since that defeat almost two months ago, it seems like the ego of “The Notorious” one has been knocked down a few pegs. Not only has he avoided making his frequent media appearances on every imaginable sports channel, showing off his playful, arrogant demeanor to the world, but he’s not too anxious to get back into the cage, either.

Following UFC 196, everybody and their mother was ready for an immediate rematch between Diaz and McGregor. It seemed that’s what fans were going to get. Eventually, reports came out less than two weeks after the initial fight that confirmed the rematch was in the works, as anticipated. By the end of March, it was finalized and set for UFC 200, with former champ Aldo set to meet former lightweight kingpin Frankie Edgar for the interim title in the co-main event. The winner of that fight would unify the belt against McGregor.

People assumed everything was back to normal, and McGregor would be back to doing his masterful self-promoting with Diaz all over again. Then came this 13-word tweet sent out in the middle of the day on a Saturday that put the MMA Twitter-verse into part panic and shock:

I have decided to retire young.
Thanks for the cheese.
Catch ya's later.

It was straight to the point.

McGregor, after an incredible three-year run in the biggest MMA proving ground in the world, was hanging up his gloves.

The reaction from ranged from nonchalant to mocking to criticism to full condemnation.

Shortly thereafter, the UFC decided to pull the featherweight champion out of the landmark card, with Dana White stating that since McGregor refused to show up for promotional obligations, it resulted in his removal. More reaction ensued, as basically every fighter spoke out, demanding to either be a) McGregor’s replacement, b) added onto the card, or c) the new main event.

One former fighter even bizarrely challenged McGregor to a “bareknuckle [sic] boxing fight.”

Following McGregor’s removal from UFC 200, Dana White held an interesting press conference regarding the pay-per-view, with most of the stars of the event showing up. There was only one empty seat, though, which was meant for the featherweight champion. However, that champion was a no-show. The majority of the press conference was spent on questions about his tardiness.

A couple of days later, the featherweight champ spoke out again with another short tweet:

Ok no more games.
I am going to release a statement shortly.

In the statement, McGregor basically went back to being his usual self-promoting machine. He talked about how much he’s done for the UFC over the last few years, mentioning all the world tours he’s taken part in, and the money he’s made the company. He also said he planned to fight soon, but needed more time to train for a potential future bout with Diaz. In the last line, he finally backpedaled on his initial declaration, flat out saying, “I AM NOT RETIRED.”

Then, a few days later, McGregor put out yet another tweet, but this one actually raised more questions than it answered:

Happy to announce that I am BACK on UFC 200!
Shout out to @danawhite and @lorenzofertitta on getting this one done for the fans. #Respect

As far as the media and fans knew, McGregor was never expected to be added back onto the event. Dana White said the decision to pull him was final, referencing his negligence to commit to the promotional aspect of UFC 200. Ultimately, that tweet just seemed to be McGregor’s way of trolling everybody and acting like everything was great again, when it wasn’t.

This entire saga involving McGregor and the UFC has become a sideshow. To be fair, it’s more of McGregor’s doing, just so he can try to get media attention and hype his eventual return. Meanwhile, the UFC seems to be giving the Irishman the cold shoulder by moving on with plans to set up the replacement fight for the main event, which will be the long-awaited rematch between light heavyweight champion Daniel Cormier and newly crowned interim champion Jon Jones, who is fresh off his comeback victory over fellow contender Ovince St. Preux at UFC 197.

This whole experience should be a lesson for McGregor that, while promoting a big fight is obviously part of the process, the focus needs to be much more on training. That’s in no way to suggest that McGregor is not training for his fights, because I’ve seen him do his thing in the gym. He really puts the work in. It shows in his fights, too. However, it would behoove him to put even more extra effort into his training, just as he does with his self-promoting, especially after what resulted in the Diaz fight. McGregor clearly has an aura that brings fans out to watch him perform the way he did when he won the featherweight title at UFC 194 over the previously dominant Aldo, but a shtick of talking a lot gets really tired if the fighter can’t back it up. McGregor was definitely backing up everything he was saying to that point, but this came to an end with his loss to Diaz. That’s when he hit a wall and was surprised when he couldn’t put away a resilient veteran fighter who was two weight classes above him and extremely skilled at more than one craft.

So, yes, of course promoting is great for the fighter to do. It makes the job of the promotion itself much easier. Unfortunately, a lot of that just involves talking and hyping, which raises the expectations of the fans that think they’re going to witness an epic performance from the fighter who is doing most of the talking. Obviously, that backfired on McGregor. He was on the losing end of the equation and had to swallow his pride by accepting defeat to the better man. Regardless of the pay-per-view buys, a fighter is failing if they are not winning their fights. McGregor, and every other fighter, knows this. That’s why fighters who have hype are forgotten very quickly when they fail.

Unfortunately, while McGregor’s self-promoting tactics haven’t been overly bothersome yet, his trash-talking is getting a little bit over the top, again. Now, he’s starting to take shots at the UFC and throw temper tantrums, seemingly still upset at his removal from UFC 200. He’s even claiming that, because of his absence on that potential blockbuster card, the event won’t do well financially with the fighters currently slated to compete. He might be right, but the UFC appears to be willing to take that risk, just to teach him a lesson. That’s what happens when you refuse to play by the rules and revolt against the system that you’re expected to operate by. McGregor made it clear that he wasn’t going to be forced into a fight, regardless of his reasoning, and now both him and the promotion might have to pay the price (literally).

The only concern now is whether the UFC and McGregor will be able to patch up their differences so the two sides can go back to working together and promoting big fights. Or has “The Notorious” one started burning his bridges and damaged things for good?