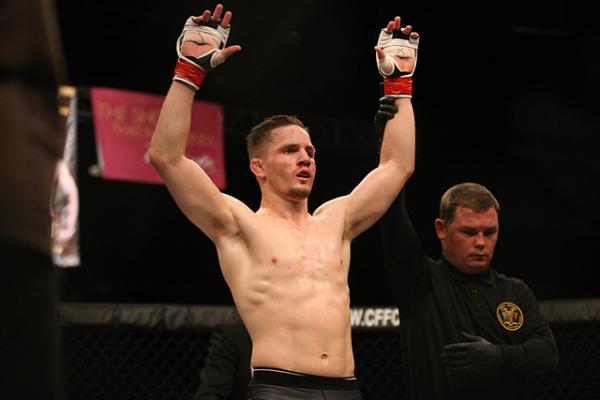 The Resurrection Fighting Alliance holds a special place among MMA promotions. Fighters who compete there have a very direct route to the UFC and fans know they’re likely watching competitors auditioning for their spot in the big show, especially if a title fight is on the docket. The RFA’s 23rd event doesn’t feature any championship affairs, but it will set the table for a number of contenders to make their case for a crack at the gold. In the bantamweight division, Joe Murphy and Terrion Ware are the two men with championship aspirations.

Murphy has been competing professionally since 2009. He has eight wins, including five by submission, to show for his efforts. The Cleber Jiu-Jitsu product has a background in wrestling, judo and jiu-jitsu. He’s a strong grappler, as evidenced by those submission wins, but his RFA debut resulted in his first TKO victory. His resume includes notable victories over Bruno Frazatto, the victim of the TKO, and Victor Henry. His only loss came via unanimous decision against Carson Beebe.

Ware didn’t make his pro debut until 2012, but he already has 15 fights under his belt. He suffered a loss to Paul Amaro in his second fight but avenged the loss less than a year later. His only other defeats came at the hands of UFC veterans Joe Soto and Jared Papazian. The 28-year-old hones his skills at the Systems Training Center. He has finished five opponents via strikes and three by submission.

Ware has quick hands, but he’s not incredibly accurate. His striking defense also leaves a lot to be desired. He drops his hands and gets hit too often. He hasn’t paid the price often in the past, but Murphy is an opponent who could take advantage of those flaws. Murphy should be able to close the distance and get Ware to the mat with ease, and that’s where Murphy will really shine.

Ware was twice slated for a rematch with Papazian before ultimately accepting this bout. He’s been a busy fighter, but his resume lacks a win over a significant opponent. Meanwhile, Murphy has impressed against some tough opponents. This could turn into a showcase fight for Murphy, who could take advantage of the holes in Ware’s ground game — the BAMMA USA veteran suffered two of his losses via submission — to lock up the win and a title shot (or, potentially, a UFC contract). Ware will push the fight into the third round, just like he did against Soto, but Murphy will eventually get the submission finish.

The Cage Fury Fighting Championships promotion continues to shine a spotlight on prospects with its 45th offering. Former Bellator champion Lyman Good provides the company with a notable name in the lineup, but the battle between Jordan Stiner and Darrell Horcher for the vacant lightweight title provides this event with its best pairing of up-and-comers.

The 29-year-old Stiner has bounced between the featherweight and lightweight divisions throughout his 10-fight career. The Renzo Gracie Pennsylvania product debuted in 2012 and won his first six fights, including a featherweight showdown with the then-undefeated Jarred Mercado. Stiner wasn’t so fortunate in his next fight, where he dropped a unanimous decision to Levan Makashvili. The loss prompted Stiner to return to the lightweight division, where he has notched three more victories, including a first-round knockout finish of veteran journeyman Mike Medrano. The Brazilian Jiu-Jitsu brown belt attended college on a wrestling scholarship. He has finished two opponents by way of submission and three via strikes.

Horcher made his professional debut in 2010. After a 5-0 start, “The Saint” competed in and won a Bellator season-seven lightweight tournament reserve bout. He was not fortunate enough to compete in the tournament itself, but he did go on to defeat Chris Liguori under the Bellator banner before suffering a decision loss to Phillipe Nover. After the loss, Horcher landed in Cage Fury, where he has reeled off three unanimous decision wins, including one over the aforementioned Medrano. The 27-year-old trains out of Unrivaled Athletics. He has four finishes by some form of knockout and one by way of submission.

This fight will be determined by Horcher’s ability to stay upright. Stiner is an adequate striker, but he’s dealing with an opponent who has one-punch knockout power. However, Horcher hasn’t been as devastating since scoring his highlight-reel knockout of E.J. Brooks. Every one of Horcher’s subsequent fights has gone the distance, beginning with the win over Liguori. On the ground, Stiner gains the edge with his superior wrestling and grappling abilities.

These men have finished roughly half their fights, but they have never been finished. That’s a recipe for a war that goes the distance, and the result should be a razor-thin verdict. Horcher has the length and striking attack to keep Stiner from closing the distance and scoring the takedown. He’ll keep the fight standing and edge Stiner on the scorecards for the title win.

More than six months have passed since Grandslam MMA’s inaugural event, but the promotion is finally set to return with its second offering. Bantamweight Victor Henry was among the stars of Grandslam’s first event, and he returns for the second show against another tough opponent in veteran Masakatsu Ueda.

Henry, fresh off a loss to Joe Murphy, lit up Dream veteran Hideo Tokoro under the Grandslam banner in July 2014. The CSW product, who trains alongside Josh Barnett, added another win in October when he submitted Cory Vom Baur with an armbar. The 27-year-old made his pro debut in 2010 and secured six wins before dropping a split verdict to Murphy. He is a taekwondo black belt, but he also has a background in jiu-jitsu. Henry has four submission victories and two TKO wins.

Ueda is a grinding decision machine who has rallied to 12 wins on the scorecards, while also posting two decision losses and two draws. Now 37 years old, the Paraestra Tokyo fighter has delivered six stoppage wins, including two by some form of knockout and four via submission. The former Shooto 132-pound champion has a lengthy resume highlighted by wins over the likes of Eduardo Dantas, Royler Gracie, Kyoji Horiguchi and Kevin Belingon. He has fought to a draw with Takeya Mizugaki and Marcos Galvao, and he suffered his only losses to Grandslam MMA founder Shuichiro Katsumura, Bellator veteran Travis Marx and top-five bantamweight Bibiano Fernandes. The loss to Fernandes came in a ONE FC title fight.

It has become increasingly difficult to count out Henry. The CSW fighter scored a huge upset with his second-round TKO finish of Tokoro. However, Tokoro has suffered 25 additional losses in his career. Henry’s loss to Murphy may be a better indicator of the outcome of this affair. Ueda, who has a college wrestling background, is more experienced and less of a finisher than Murphy, but he is also the only fighter on Henry’s resume to sport a significantly better record than Murphy. Ueda may have lost to Fernandes, but he went a full five rounds with the dynamic submission specialist. He has delivered similarly grinding performances against the aforementioned Belingon, Horiguchi, Marx, Dantas and Mizugaki.

A second stunning win in a row for Henry would certainly put him on the MMA map. However, it’s difficult to imagine that he can get past such a tough test. Ueda will play his typical point game, seeking to grind out the victory on the scorecards. Ueda’s strategy is likely to prove successful, earning the Japanese veteran yet another decision victory.