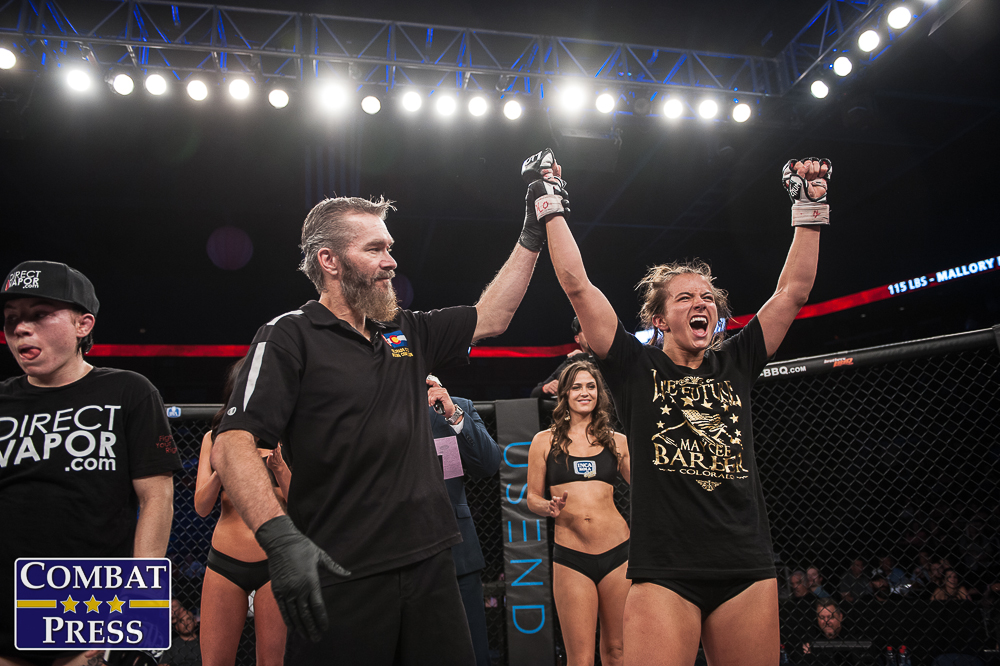 This weekend’s women’s MMA action was suppose to be three fights, but Macy Chiasson was forced to pull out of her bout with Aspen Ladd at the last minute due to injury. We did have two good fights so let’s take a look at them.

Also, apologies for these reviews perhaps being shorter than normal. I wrote this a day early because Monday is my birthday. And if a birthday isn’t an occasion for “less work and more fun”, then I don’t know what is.

Okay, let’s not ignore the obvious and talk about that decision right out of the gate. I, like the majority of the world, scored the bout 29-28 for Maverick. Round three was Barber’s round but the first two rounds, I can’t see scoring any other way than in Maverick’s favor. It’s really unfortunate because Maverick did what she needed to do to win a fight.

It’s also unfortunate for Barber because even though in the post-fight interview she said she felt she did enough, she’s going to watch this fight and feel differently. For her next fight or two, all she’s going to hear about is her “gift” decision.

What’s done is done. None of us can change a decision. But I can talk about what happened in the fight.

In round one, Barber again came out with a very interesting style. She has fallen into the habit of starting slow, being at a distance and not wanting to engage. I am not sure if this is due to not warming up before the fight, a strategy to frustrate her opponent, or just trying to feel things out. But it’s essentially giving away a round. All Maverick had to do to take round one was come forward.

Even if she didn’t land, coming forward was going to be enough because to the judges, Barber was just avoiding fighting. Maverick did the right things. She did give away the fact she was getting annoyed with having to chase, but she was persistent and initiated what action she could.

Part of the problem Barber had was when she was getting in striking exchanging, she went back to lowering her head as she was coming in. When you lower your head like that, you are taking your eye off of your target and taking your eye off the fists coming at your face. Maverick also did something you see me preach about often. She cut the cage and didn’t chase. She basically put Barber in a box and kept making the box smaller and smaller.

Now in round two, Maverick was doing well but Barber also did well in spots. This round was, in many ways, a repeat of round three except I felt Maverick was slowing and Barber was in the process of taking control. I don’t know if this was what Barber was hoping for with all of her first-round movement, but it is what was happening. Barber was trying to throw her overhand right. Everything she did seemed to be designed to get that shot off.

Round two didn’t have a ton to it and really with about two minutes left, I thought Barber was going to get the round. But then Maverick got the takedown and quickly got her back, which surprised me. I expected some scrambles, but once it went down, Maverick had no problem getting her back and landing strikes. It got her the round…… at least to me.

In round three, Barber had a good round. On commentary Daniel Cormier said maybe it’s her plan, paraphrasing, “to just avoid damage and get the fight to round three.” If that is the case, it’s not smart. You’re basically forcing yourself to chase third-round finishes. That being said, I highly doubt that was her strategy. Maverick was clearly tired and Barber wasn’t, and that is a credit to her. Trust me, round three of a fight, even those in the best condition can get tired.

Barber landed a lot of good, clean and hard strikes, put Maverick against the cage and did work. Maverick did land some of her own and fought through the exhaustion but Barber clearly got the round. After round three I said to myself that I wish Barber had shown some of that urgency in round two. Then she would have gotten the decision… oh, never mind.

What is next for Barber? It’s not going to happen, but I would say run this one back.

This fight really came down to one thing. In my preview, I mentioned how Belbita had a reach advantage, but she doesn’t use it well. Instead of using that reach to keep the fight at a good range, she instead throws wide looping punches. Or comes in close and basically eliminates her reach advantage. Well, she didn’t do that in this fight. She used her reach beautifully, kept pumping her jab and had Goldy moving backwards.

Right out of the gate in round one, Belbita had Goldy hurt and hurt badly. Goldy looked to be on her way out until she landed a takedown to save herself from getting finished. I wish Goldy had made more of an effort to keep it on the ground. She had two minutes to work and Belbita can be beaten on the ground.

Goldy may not have locked in a submission but if she could have advanced, there might have been ground and pound opportunities available to her. She basically stood up on her own and Belbita went back to landing strikes to easily get the round. Had it not been for the takedown by Goldy, it might have been a 10-8 round.

In round two, it was just more of the same except Goldy wasn’t taking fight-ending damage. Goldy is tough and she was trying, she just couldn’t get around the reach of Belbita. Belbita knew it and used it well. You could just see in Belbita’s facial expression and movement. She knew she was in control and was having fun, while the look on Goldy’s face was one of frustration.

Round three was better for Goldy. She landed a couple of decent strikes and the stand-up was fairly even. Goldy did start making efforts to get it to the ground. She shot in at one point and Belbita smartly got an underhook immediately to stop the takedown. Goldy did get a late takedown and landed some good ground and pound to end the round. For me it was enough to win her the round at least, but only one judge agreed with my opinion. It was a really good performance by Belbita, by far her best since joining the UFC.

What is next for Belbita? I’d be ok with her facing the winner of this weekend’s bout between Cheyanne Buys and Gloria De Paula.