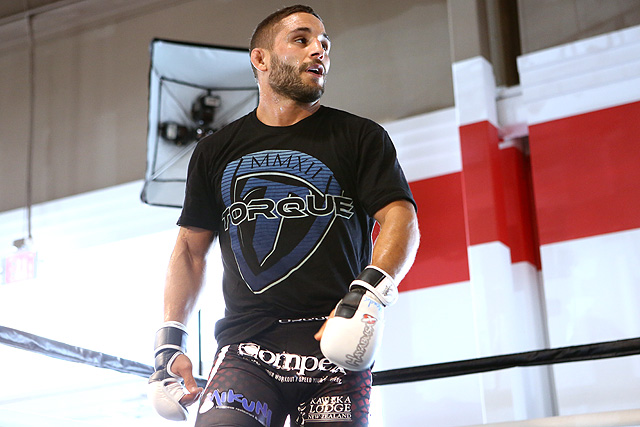 UFC 189: Everyone Wins with Chad Mendes vs. Conor McGregor

Ever since it was announced, Conor McGregor’s fight with José Aldo has been one of the most talked-about fights in UFC featherweight history. For months and months, fans and fighters watched as the brash Irishman gave no respect to the champion and owner of a winning streak that dates back a decade. Fans watched as the current champion’s nerves were struck over and over. Everyone was waiting for this fight… and then it happened.

Just weeks prior to the pair stepping inside the Octagon, the unthinkable happened. Well, the kind of unthinkable. Aldo suffered a rib injury and his participation in the blockbuster fight was put in jeopardy. With all of the speculation, the UFC made a bold move and slated Chad Mendes as a “backup,” just in case.

On June 30, after a back-and-forth deliberation, it was announced that Aldo had officially been pulled from the main event of UFC 189. This is where it really gets interesting. Mendes stepped in to take Aldo’s place and face McGregor in the main event for an interim featherweight title. Fans and media exploded the internet with claims that the champion was “scared.” All sorts of allegations started to pour out, including accusations of failed drug screens (Aldo’s test results did come back clean).

However, a closer look at the replacement fight that was booked shows that it’s not entirely a loss.

The fans were waiting to watch McGregor compete for a title. Well, in all technicalities, he still is.

They were flocking to see what the Irishman was capable of doing against top-level competition. Yes, they are still getting that.

This fight answers the questions that everyone wanted to have answered prior to McGregor even getting his shot at a title. Can McGregor compete against top-level competition and an elite wrestler? Everyone will find out on July 11.

Then there’s Aldo. It seems like creating an interim belt for a fight is a way of punishing him. In all reality, it is and it isn’t. The fans wanted to see McGregor compete for a title and it would be a hard sell to have a non-title fight take the bill over the welterweight championship tilt between Robbie Lawler and Rory MacDonald. So the creation of the interim belt really had a practical purpose behind it, but for the wrong reasons. The UFC is putting a lot of stock into McGregor because he is doing something that Aldo isn’t: He’s bringing in new fans and lots of dollar signs. Aldo seems to be suffering from the same “curse” that befell Anderson Silva and Georges St-Pierre. Fans started to not wonder if they were going to win, but it was more a matter of how.

Now, it’s no secret that Aldo has pulled out of many a title fight due to injury, but he has also been one of the more active and consistent champions that the UFC currently boasts. The difference is that this was a fight against McGregor, a challenger who would push the champion like no one before him. This is a challenger with a style that Aldo had supposedly never encountered before. Does any of this sound familiar? It’s the same spiel that fans are given with every single title fight — that a challenger will be the toughest test for the champion.

So why is this one different? One word: personality.

Aldo does not speak English very fluently. McGregor, meanwhile, is suave and articulate when it comes to who, what, when, where, why and how. Whatever McGregor has to say, the fans want to hear. The fans want to see a changing of the guards. Just like when the New York Yankees won time and time again, fans want to see someone else hold the gold. It happened when Chris Weidman dethroned the ever-elusive Anderson Silva. It happened when St-Pierre vacated his belt and when Jon “Bones” Jones was stripped of his crown. Fans want dominance and personality, not just one or the other.

The fight itself, is a win-win for everyone. If Mendes is victorious, it sets up Aldo-Mendes III. The first fight was over in the first round and the second was an instant classic, so it would only make sense to have a trilogy fight, even though the current champion was successful in both of the previous fights. If McGregor wins, it proves that he can compete and defeat high-level competition. It will set up a unification of titles between Aldo and McGregor, and it will surely bring in record pay-per-view and attendance numbers once again for the UFC.