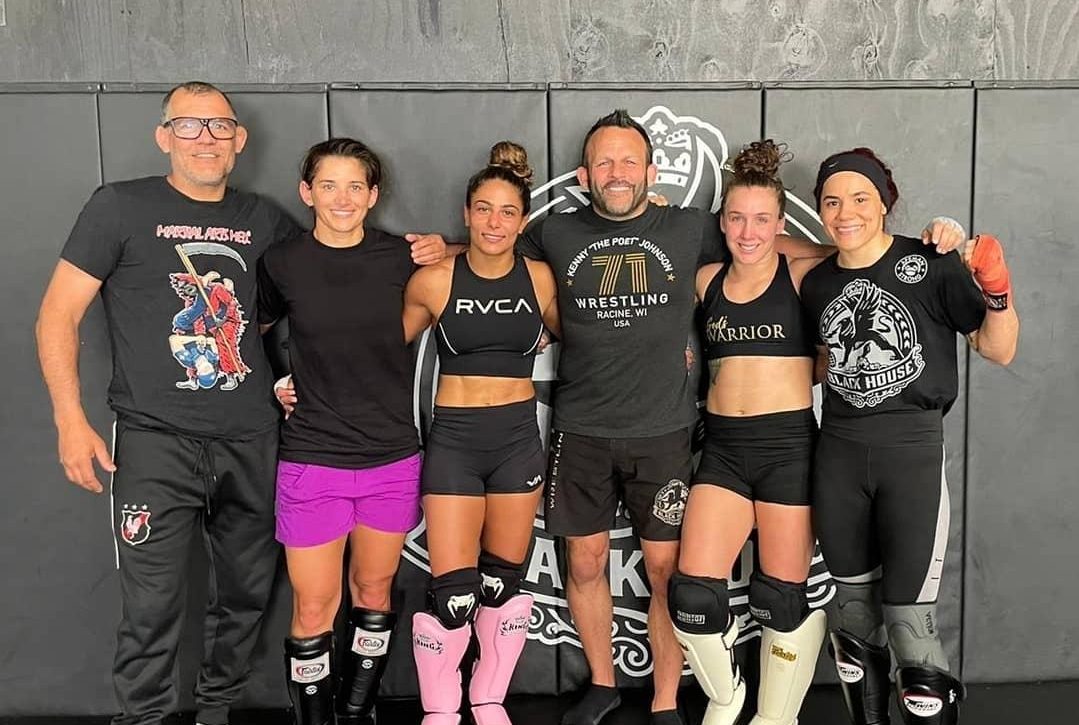 Home is where your heart is, but it’s not always feasible. Some cities or even entire countries are just too difficult to stay in, even if that’s where a person was born and raised.

Pierangela Rodriguez grew up in Venezuela, a country that in recent years has suffered from a socialist movement, coined the Bolivarian Revolution, which began under former president Hugo Chavez and persists today. Rodriguez loves her native country, but growing up there came with mixed emotions.

“It was crazy,” Rodriguez told Combat Press. “It was really hard in Venezuela – just living is hard. There are so many political and economic problems there. It’s like a roller coaster. Sometimes, you can have a normal life, but sometimes it’s impossible, because things are changing a lot every day. Other people don’t realize how hard it is for Venezuelan people. When you can’t find food in the grocery store – when you can’t find necessary products, like soap and shampoo, things like this – these things are so simple to find in other countries, but they can be hard to find in Venezuela. You realize what the important things are in life.”

Rodriguez and her brother Gian Franco grew up in a good family. She enjoyed sports – soccer, basketball, volleyball and lifting weights – but she didn’t play in many organized sports organizations. Unlike some parts of the world, Venezuela does not have organized sports at the university level, so when she attended Rafael Urdaneta University, most of her time was spent studying. She earned a degree in psychology, but upon graduation, her life greatly changed. Some friends were taking martial arts classes, and she decided to try her hand at combat sports as well.

“I always liked sports, but I always got so bored doing sports, because I always thought every sport had a limit of learning,” Rodriguez said. “You learn how to kick a ball. You learn how to lift weights. But, in MMA, there are so many things you can learn. You can never stop learning in this sport. So, that got me into fighting.

“I started with boxing, and the first time I stepped into the ring, I realized that was my thing. That was my passion. I just felt so good, and I was like a fish in the water, you know? It was so smooth, and everything was so easy for me. So, I started taking it seriously after I finished my studying. I said I was going to try this, because it made me happy, and it made me comfortable.”

Rodriguez started her boxing training in Panama, and as her fighting career developed, she made the switch to MMA, and three years ago, she ended in living and training in Spain.

“My family is Italian, and for Venezuelan people, it’s hard to get a visa,” Rodriguez said. “I have an Italian passport, and I am used to the European culture. I decided to try and live in Spain – because I really like to speak in Spanish – and I fell in love with Spain.”

Rodriguez made her pro MMA debut in May 2017, and won by doctor stoppage. In fact, her first four pro fights were all finishes in her favor. In January 2020, she went the distance for the first time, picking up a unanimous decision over Kayla Hracho at Ultimate Combat Challenge 48 in Panama. She was sitting at 5-0 as the COVID-19 pandemic hit, and she hasn’t fought since. Recently she signed a three-fight contract with Legacy Fighting Alliance and came out to California to train at Black House MMA.

“Things in Europe have all stopped, because of COVID,” Rodriguez explained. “All the fight events right now are [frozen]. So, I decided to come here, because I spent one year trying to fight, and I have had four or five fights cancelled in the last year because of the coronavirus. I decided that it was a good chance for my career to know more people and try some other training. My manager got me this opportunity, and I took it.”

Last week, Rodriguez finally got a confirmed fight. This Friday, she headlines LFA 105 fighting for the organization’s strawweight title, which was recently vacated by Lupita Godinez for a short-notice fight in the UFC. Her opponent is Ukrainian Svetlana Gotsyk.

“I knew they were looking for something for me for LFA,” Rodriguez said. “They told me they found a girl, who was a jiu-jitsu girl, and the girl was injured, so they changed it last week. I don’t know anything about this new girl I’m going to fight for the title. It’s going to be a really big fight, and she has a lot of experience.”

At only 24 years old, Gotsyk is four years younger than Rodriguez, but she is already 13-4 as a pro. She is 10-1 since March of 2016, and is currently riding a three-fight winning streak. Her last three wins have been first-round stoppages. Like Rodriguez, this LFA title bout is her first fight on American soil.

“When they asked me if I wanted to fight her, I saw some of her fights on YouTube,” Rodriguez said. “Not much, but I wanted to see what her style was. I found out she had some good strikes, some good punches, she had a strong armbar, and she’s good in the closed guard. She has a lot of talent, but I think she’s going to have some trouble with me in the cage. I’m not an easy fight. I don’t give up. It doesn’t matter how hard you hit me, I won’t give up.

“I’m really aggressive, and I can punch hard, but everybody can do this. The thing that makes me different is that I’m a smart fighter. I can adapt to the situation; I can feel the situation in the cage, and make some changes when I need to. I’ve been through so many changes in my life that in the cage, I know when something is not working. Every day, I’m getting more tools, and this is what I like about my game. Everybody thinks I’m just a striker, but once we start fighting, they realize I’m not just a striker.”

With the LFA constantly graduating fighters primarily to the UFC, the LFA 105 headliner marks the rare occasions that both fighters are making their promotional debuts and vying for a belt. For Rodriguez, this is the perfect segue back into the cage after over a year on the bench.

Not only does Rodriguez love the sport of MMA, and all of the growth and challenges that come with it, she also loves the entertainment aspect. And, entertainment is definitely a family affair. Her brother is in the entertainment business as well. He has been a professional actor for several years.

“It’s fun, because we are actors in different ways,” Rodriguez elaborated. “I have the violence, and he has the stories. It’s all so different, you know, but we are both artists in some kind of way. He can do all kinds of stuff. He’s a real actor, so he can play whatever. You can ask him to play a different person, and he can change completely. It’s amazing. It’s really interesting how they get into it mentally and it’s hard work too.

“Since we were kids, he was bigger, but I was always defending him from everybody. I’m a really protective person, so every time we were in trouble or something, he protected me, and I protected him. It didn’t matter if I was smaller. We protected each other a lot.”

Rodriguez’s parents still live in Venezuela, and that is still her home. Life is still difficult there, especially with the political turmoil, which has hurt the citizens the most. However, Rodriguez would like to return someday, if it makes sense.

“The country that I want to be in when I am older is my country, Venezuela,” said Rodriguez. “After my retirement, I want to be there, but it’s impossible to know, because of the problems there right now. That’s my No. 1 option, but if I cannot do that, because of the political problems, I think Spain is my second home. When you arrive on the path to go to your real home, you childhood home, it’s so different. It’s just that sensation of home.”

Professionally, Rodriguez has found a home in the LFA. However, that could all change with a win over Gotsyk. An LFA title is nearly a guaranteed ticket to the big show, and on Friday night, the native Venezuelan gets a chance to shine in the spotlight live on UFC Fight Pass.