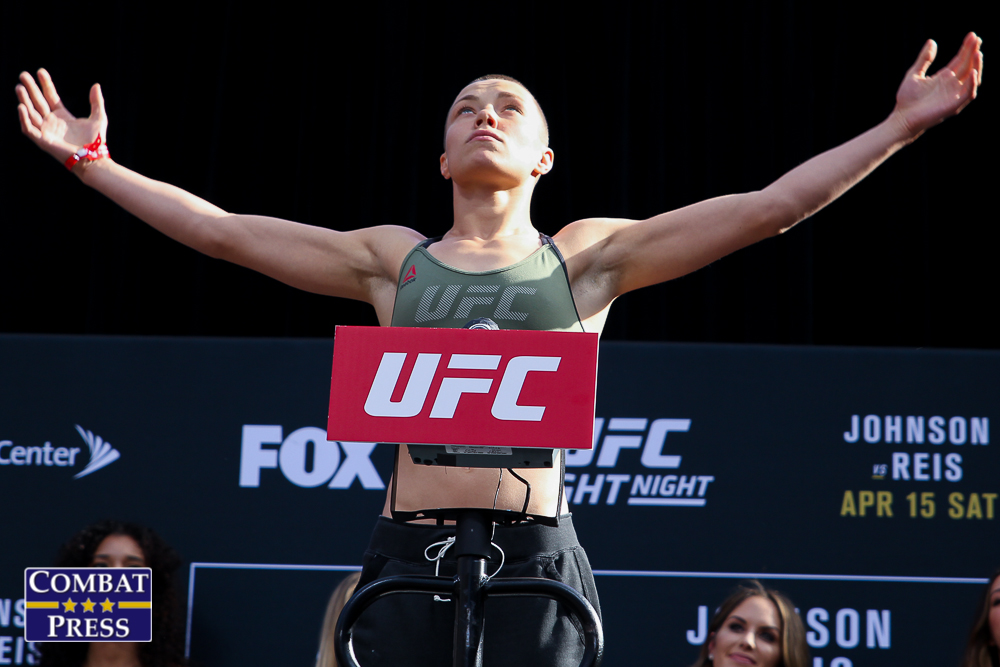 If you are a combat-sports fan, then this was an amazing weekend for you.

More specifically, in women’s action, we started at Legacy Fighting Alliance 105 with a great main event in which Pierangela Rodriguez got a fifth-round stoppage over Svetlana Gotsyk to become the company’s new strawweight champ. Then, at UFC 261. Valentina Shevchenko dominated and then finished Jéssica Andrade to retain her flyweight title, while Rose Namajunas scored a quick highlight-reel knockout finish to take the strawweight belt from Zhang Weili.

Let’s take a look at the three fights we previewed on Thursday.

Let me preface my review by saying that most people seemed to have this fight closer on the scorecards than I did. I had Rodriguez comfortably ahead three rounds to one going into the fifth frame, but it seems there were many who had it even.

In the early part of the fight, we saw what was expected. Gotsyk entertained the stand-up for a bit and looked to counter Rodriguez when Rodriguez came forward. Rodriguez was not overly aggressive and instead came forward in bursts. When Rodriguez did come in, she landed hard. Rodriguez has some incredible power for a strawweight, too. As it progressed, Rodriguez got more and more confident — and even cocky — and started to come forward more often. She did not seem to respect the power in return from Gotsyk.

Gotsyk eventually had enough of this and became much more interested in getting the fight to the ground. However, her takedown attempts were made more out of desperation. When you shoot out of desperation, it is so much easier for your opponent to defend. Desperation shots aren’t set up with strikes. You just jump at the first perceived opening you have, regardless of your distance. It’s even harder when that distance is far away.

As Rodriguez was landing, she was making Gotsyk move back so that she had more ground to cover when she tried to get in. This begs the question of what Gotsyk should have or could have done differently. She wasn’t liking the hard punches coming at her, but she wasn’t totally shying away. So, she had two options.

First, Gotsyk could get in close and get into an exchange. Those exchanges are when Rodriguez would swing the hardest, and that is when Gotsyk could come in low and catch Rodriguez when her balance to defend wouldn’t have been as good.

Option two? Feint, and feint often. There wasn’t much of that coming from Gotsyk. Feinting punches could have again forced the wild swings from Rodriguez, and feinting shots could have left Rodriguez guessing more.

As the fight wore on, Gotsyk did start having more success of her own on the feet. She put an end to my worries about her cardio. She got to the point where she said to herself, “OK, the punches hurt, but I can take them.” She got more confidence, and with confidence came a burst of energy. She also seized the opportunity when Rodriguez was starting to feel herself. Rodriguez was really feeling good and confident and showing even less respect to the striking and power of Gotsyk, and Gotsyk took advantage of this. I was really impressed with Gotsyk in rounds three and four.

In round five, it all finally caught up to Gotsyk. Rodriguez landed hard, hurt her, and landed more for the stoppage. Gotsyk surely wasn’t happy with a loss, but she showed a lot of skill. She will be back and winning big fights. Meanwhile, Rodriguez showed that she is very legit and is going to be giving a lot of girls problems.

What’s next for Rodriguez? I saw a lot of tweets suggesting a trip to the UFC after the fight. I’d hold off on this. As good as she looked and as good as she is going to be, I feel like this would be rushing her. An LFA title defense against Loveth Young would be a crazy fight that would be as fan-friendly as it gets.

Shevchenko beat Andrade via TKO in round two, and there really isn’t much to say here. This was eight or so minutes of wash, rinse and repeat for Shevchenko, who is possibly the best female striker in the UFC. She has also turned herself into a really good grappler.

Shevchenko used a clear size and strength advantage to easily take down Andrade whenever she wanted and land ground-and-pound. Andrade would work her way up, but right back down she went. When this happens, you’re not only physically being beat, but you are being mentally beat as well. You put all that energy into standing up, work really hard for it, and then, boom, you are right back down there. You just get morally deflated and start doubting yourself. It’s downhill from there. Shevchenko didn’t just beat Andrade physically, she beat her mentally.

I normally might ask the question about what Andrade could have done differently here, but there is really nothing she could have done. Right from the jump, she was put in a bad situation where there wasn’t really a way out. She didn’t have a chance to do anything in the first place, so how could she have done something differently? This is not an indictment of Andrade. It’s just a testament to Shevchenko’s skills. Shevchenko has made a weakness into a strength, and she is now capable of winning any style of fight.

What can you say about a fight that lasts 78 seconds? These two ladies exchanged some strikes. Zhang threw and landed a few more, but then “Thug” Rose used what I said would be her best weapon here — the head kick — and that was that. Zhang seemed to think it was stopped early, but it wasn’t. When a fighter is wobbling as they protest, it means they are still at least somewhat out of it even when it’s over and they are not taking any more blows.

Zhang is very confident in her hands. The way the first minute played out, she surely felt it was to her benefit. Really, in most cases, she would be correct. However, go back and watch what happened. Namajunas was doing something brilliant. She was letting Zhang feel good and come closer. Zhang surely knew Namajunas was going to want to use kicks, so she was going to also be on the lookout for them. So, when Zhang was in range, Namajunas actually looked low. Zhang saw that and expected low kicks. This is when Namajunas instead went high and landed beautifully. What you saw in this fight was a plan made, a plan enacted, and a plan that worked out perfectly.

I wish I had more to say here, but, again, how much can you say about a 78-second knockout?

What is next for Namajunas? A month from now, Carla Esparza faces Yan Xiaonan. The winner of that fight is very deserving of the next title shot.