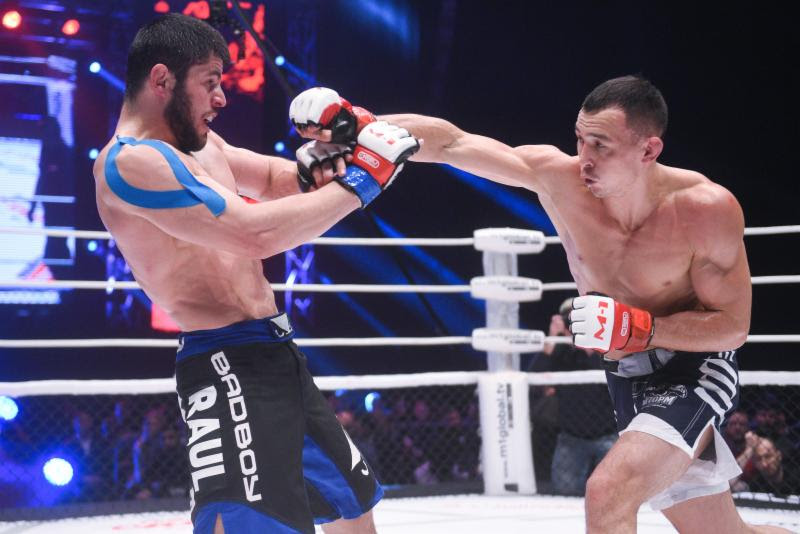 The 94th edition of the M-1 Challenge series features quite a few compelling prospects. Perhaps the biggest potential future star is lightweight champion Damir Ismagulov. The 27-year-old has only lost twice through 18 pro outings, and now he’s back to defend his strap against veteran challenger Artiom Damkovsky.

Ismagulov has put together a strong run since his professional debut in 2014. The Kazakh fighter claimed wins in six of his first seven fights, including two low-level appearances under the M-1 banner. His only loss in this stretch came via a doctor’s stoppage against Ramazan Sulebanov. He stumbled in 2015 when he dropped a decision to fellow prospect Ramazan Esenbaev, but he recovered to the tune of another 10 victories, including six stoppages. The Fighter Gym product is on home turf in Orenburg as he makes his third title defense after capturing the crown with a victory over Maxim Divnich. Ismagulov has a resume that includes notable victories over Raul Tutarauli (twice), Rubenilton Pereira and Rogério Matias.

The 34-year-old Damkovsky has been a regular in the M-1 organization since not too long after his 2006 debut. He’s held the M-1 lightweight title before, and also made an unsuccessful bid to recapture the belt in 2016. While he holds a respectable overall mark, Damkovsky has never strung together more than five consecutive wins. That doesn’t mean he hasn’t topped some notable names in his career. Damkovsky’s list of victims includes current UFC fighter Mairbek Taisumov, Bellator veteran Jose Figueroa, well-known veteran Ivica Trušček and the aforementioned Divnich. However, he’s also suffered losses to Mikhail Malyutin, Sergey Golyaev, Figueroa (for the M-1 title), Daniel Weichel, Taisumov and Alexander Butenko.

Damkovsky might be a constant presence in M-1, but he’s hardly been a dominant and effective force within the company’s lightweight division. He’s had a nice recent streak where he’s played spoiler to Divnich, Alexey Makhno and the formerly undefeated Erivan Pereira, but this will be his first fight in well over a year.

Ismagulov has had a far more impressive climb to the top of the M-1 mountain. He’s scored nine knockouts, and his only stoppage loss came as the result of a doctor’s intervention in one of his earliest fights. He’ll have his hands full with Damkovsky, but Ismagulov has the better striking arsenal and a strong chin. If he wants to avoid Damkovsky’s own strong stand-up game, then he can always look for the takedown and attack the Belarusian’s biggest weakness, his submission defense.

Damkovsky is a well-traveled veteran with plenty of experience under his belt, but he rarely excels when thrust into battle with high-level competition. His win over Taisumov was a doctor’s-stoppage TKO, and the future UFCer later avenged the loss with a submission finish of Damkovsky. Ismagulov is a top talent who is more than capable of scoring a big win over another notable name when these two men tangle. Despite the Kazakh’s love of the knockout, this one will hit the ground and end in a submission.

Many of the top female strawweights now reside in the UFC. Those who are not on the UFC roster tend to land in Invicta Fighting Championship or ONE Championship, where they are essentially converted to flyweight thanks to the Asian organization’s unique weigh-in system. However, there are some outliers. Count the World Warriors Fighting Championships women’s strawweight champion Svetlana Gotsyk among them. The 21-year-old upstart is already 10-3 in professional action. She’ll put her belt on the line against Magdaléna Šormová in one of three title affairs at the top of the promotion’s 11th card.

Gotsyk launched her pro campaign in 2014 with fights on back-to-back days roughly a month after her 18th birthday. She won the first of these contests, but the second fight ended in a submission loss to future Bellator fighter Lena Ovchynnikova. “The Phoenix Bird” lost her next fight to Natalya Denisova, but then found solid footing and scored consecutive knockout wins. Her next setback came via knockout to Japanese star Weili Zhang. Gotsyk impressed with six straight submission wins, the last of which secured the strawweight championship. Her first defense of the belt was a successful one, ending in a decision nod over Invicta veteran Simona Soukupova.

Gotsyk’s opponent hails from the Czech Republic. Šormová is 29 years old, but she has only six fights under her belt despite fighting professionally since 2013. She won her first four fights by stoppage in her native Europe before traveling to Japan to participate in a Pancrase show. The Penta Gym export went the distance in that contest, but she dropped the decision to Ayaka Miura. Šormová returned to Europe for her most recent fight, which ended in a submission victory for her against Cristina Stanciu.

Miura and Stanciu represent the toughest opponents Šormová has encountered in her career. She was able to finish Stanciu in the first round, but she couldn’t get past Miura. Šormová has to resort to dragging her opponents to the canvas because she often lacks the strength to power through on the takedown. Once on the mat, she’s good at avoiding submissions while maintaining top control. However, her ability to find submissions of her own could use more refinement. It’s worked so far, even against Stanciu, but the real test will come when she starts encountering skilled grapplers like Gotsyk.

Gotsyk has struggled against the best fighters she’s met, but she did eke past Soukupova in a hard-fought war, which is no small feat. She can change levels and score the takedown, but she’s also easily planted on the mat herself. She stays active even while on her back, though. She’ll throw up armbar attempts relentlessly, and even came close to catching Soukupova in one.

Gotsyk might want to keep this one standing, but Šormová will turn it into a grappling affair at some point. Gotsyk isn’t capable of stuffing repeated takedown attempts. However, the Ukrainian’s offensive-minded attack off her back will keep her in this fight even when Šormová does get the takedown. Eventually, Šormová will make a mistake and leave an arm for the taking.

Cage Warriors is set to crown a new bantamweight champion at its 94th event, which takes the British promotion to Belgium. The title hopefuls in this headlining contest are Brian Bouland and undefeated up-and-comer Ilia Topuria.

Bouland is a native of Belgium. The “Red Kings” fighter debuted in 2012 and scored three wins, but he was inactive for the next two and a half years before returning in mid-2015. He picked up where he left off to add two more wins to his resume. Bouland finally faced a setback when he fought Marko Kovacevic at HIT Fighting Championship 3. Kovacevic put away Bouland in just 23 seconds in a bantamweight title bout. Bouland returned to the win column when he joined Cage Warriors and scored knockouts of Darren O’Gorman and Josh Reed.

Topuria represents Spain’s Climent Team. He’s been fighting professionally since 2015, but only returned to action in April after roughly a year and a half of inactivity. Topuria fed on rookies and sub-.500 fighters before his hiatus. His return came under the Cage banner, where he fought prospect Mika Hamalainen. As with all of his previous opponents, the Spaniard was able to submit the Finnish fighter.

Bouland has had quite a few of his fights go the distance, but he is capable of scoring knockouts. Topuria’s style centers around the grappling arts. As easy as it would be to suggest that Topuria is a standout submission fighter, he’s done much of his work against fighters who offer little in the way of a real threat. Bouland is a significant step up for Topuria, and the undefeated fighter might not be ready for it.

Grapplers can sometimes get overwhelmed or just simply dominated when they meet a striker who can stuff their takedowns. Bouland is likely to teach this lesson to Topuria, who will wither once Bouland starts unleashing his fists.