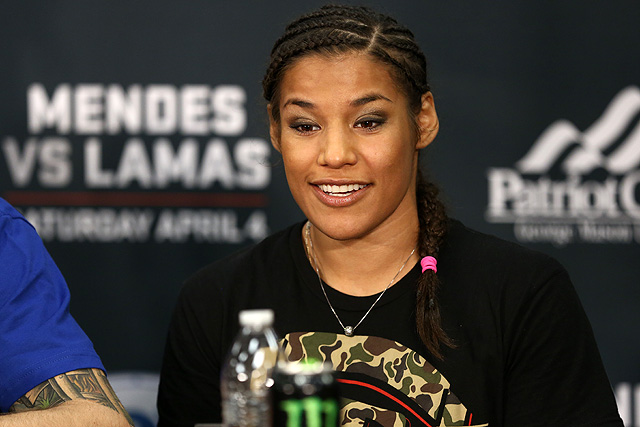 Women’s MMA Weekend Review: Against the Odds at UFC 257

UFC 257 definitely delivered this weekend. There were some surprising upsets, beautiful finishes, and exciting fights that went the distance.

All three of those descriptions can be applied to the female bouts on the card, depending on whether or not you view Marina Rodriguez’s win over Amanda Ribas as an upset. All three of the women’s bouts delivered. Let’s take a look at them.

Rodriguez defeated Ribas via second-round TKO, but round one went very well for Ribas. She fairly quickly was able to get the fight to the ground, where she had the clear advantage. Rodriguez had a good position to start, but it was clear early that Ribas was working her way into the better position. She slowly turned into Rodriguez, who at that moment had a decision to make: she could either work to try to get the back of Ribas or look to fight off Ribas by turning into her. She smartly chose not to go after the back.

Why was this the better option? Wouldn’t it be smarter to try for a dominant position? Not in this case. If Rodriguez got too aggressive here against someone who is clearly the better grappler, then there was far too much risk of ending up in the worse position herself. With the option she chose, the absolute worst-case scenario for Rodriguez was going to be Ribas ending up in her guard.

Once Ribas was successful in turning, she was able to be effective and landed some good ground-and-pound. If I had been in Rodriguez’s spot, my defense would have been different. Rodriguez seemed to focus more on controlling — or at least trying to control — the wrists of Ribas in an attempt to stop the damage. The better route would have been to focus her energy on trying to control the posture of Ribas: keep her tied up, pull her in close, and not come down with strikes. In trying to instead control the wrists, Rodriguez allowed Ribas to posture up and be high above her. Once Ribas pulled a hand away from the grip of Rodriguez, she was able to quickly land a hard blow.

In round two, Ribas did not elect to go for the takedown right away. Rodriguez caught her, dropped her, and landed more punches. At first, it appeared referee Herb Dean was stopping the fight. Rodriguez stood and walked away. Dean, however, had not stopped it. This forced Rodriguez to come back and rock Ribas again to get the stoppage and a huge win.

Let’s talk about what happened. Dean saw Ribas down and in trouble. He was rushing in to stop it. Upon getting in close, though, he saw that Ribas wasn’t completely done. He tried to sort of do the Flintstones, trying to put on the brakes with his feet. He couldn’t stop as quick as he wanted, and Rodriguez saw him coming, thought it was being stopped, and stood up as Dean was trying to reverse course, causing perhaps a tiny bit of contact.

So, who was in the wrong?

Well, everyone seemed to be going after Dean afterwards. In my own opinion, however, no one was in the wrong. I’ll critique when I feel a critique is due, but I really don’t see it here. You had a referee rushing in for a closer look and ready to stop it if needed, but he couldn’t avoid contact with a fighter who thought it was over. These reactions simply combined to create a confusing situation. Rodriguez wasn’t wrong either. She saw Dean coming in, thought it was being stopped, and, after feeling slight contact, believed it was over. In fact, credit should be given to her, because we often see where the ref is stopping it and the fighter can’t resist that one last shot. Rodriguez was being professional and stopped the punishment the moment she felt it was over.

I know those who asked me to talk about this are upset. They are probably ready to read my roasting of Dean, but I just can’t fault him here.

What’s next for Rodriguez? While I would rather see her matched up with someone coming off a win, I would vote for Claudia Gadelha next. Gadelha is ranked two spots ahead of Rodriguez, so it’s a chance for Rodriguez to move up the rankings. It would potentially be a really fun fight, too.

Peña defeated McMann via rear-naked choke in round three of a fight that was everything I wanted it to be. I absolutely loved it. It was my kind of fight. That being said, it is also a simple fight to review.

In round one, McMann had some success on the feet early. It appeared that this was her plan: to keep it on the feet. McMann does have the power advantage, and surely Peña was expecting takedown attempts, so maybe McMann was throwing a curveball and looking to land big on the feet. I liked this approach from a strategy standpoint, but it wasn’t the type of fight I wanted to see. Soon, none of those thoughts mattered.

The fight did hit the ground. McMann actually got two takedowns in the first round. Peña displayed an active guard, which was to be expected. This prevented McMann from doing a whole lot. While it was a clear McMann round, it wasn’t a terrible one for Peña going forward, because she did enough with her guard, bringing her legs up and doing subtle things that could lead to a submission. This could make McMann be a little hesitant going forward.

Peña won the second round based off of what she did on her back. She was active. She was throwing strikes and again doing those subtle little things. McMann was now wary of these things, which slowed down her offense. In many ways, Peña won the round because of what she had started to do in round one.

The action again went to the ground in the third frame. Peña now had the better position. In a fight where the third round could decide the result, Peña could have been safe and cautious. She could have just kept position and gotten the decision. However, she wasn’t going to do that. If Peña could keep the dominant position, McMann would not be as active off her back. Peña was able to do so, and submission opportunities opened up. Moments later, Peña got the tap. It was an exciting ending to a fight that was very exciting for me as a fan.

What’s next for Peña? She made a point to call out Amanda Nunes for a title fight. I’m not quite there yet. I want to see her get another win or two against top opponents. It just so happens that one who Peña was previously supposed to fight is nearing her return after a bad injury: Aspen Ladd.

Calderwood took the unanimous decision in another really good fight.

I was off on this one. I expected Eye to want to rely more on wrestling, but she didn’t do that at all. She seemed to want to work in the clinch.

In round one, Eye had success when the clinch was on the cage. She wasn’t landing fight-ending strikes, but she was landing enough to hold the advantage there. When they clinched in the center, though, it was Calderwood who held the edge. Why was it different depending on where the clinch was happening? Well, Eye could use her strength to control the position against the cage and stay in close, where she could land. When it reached the center of the cage, Calderwood could rely more on technique, create a little space, and land.

When Calderwood has space in a clinch, she is vicious. Ideally, Eye would have probably preferred to push it to the cage every time. However, Calderwood was very good at making sure to be higher than Eye. If you want to push a big boulder up a hill, what is easier? Pushing it from a distance, where you only have the strength of your arms? Or getting right up on it, where you have your whole body assisting your arms in pushing it? Obviously, it’s the latter. With Calderwood being higher, it also made it harder for Eye to get her momentum going to push her opponent to the cage.

In the second frame, Calderwood really took control and landed the strikes. She mixed them up well, too, with kicks, punches, and everything that was available to her. Eye really didn’t have an idea of what was next, what body part was coming at her, what angle it was coming from, and how many were going to follow. This kept Eye on the defensive and prevented her from really getting much off herself.

Eye seemed more content to stand with Calderwood in the second round, which helped the Scottish fighter. The clinch didn’t seem as important to Eye, whether that be from a strategy standpoint or whether it was due to not feeling like it was available to her due to the damage Calderwood did in the clinches in round one. Calderwood did good at keeping her back away from the cage, too. If Eye did want the clinch, it would be easier with Calderwood’s back near the cage. Eye could have had far less road to travel to get the clinch and push to the cage.

Round three was similar to round two, albeit a closer one. Eye did get some more offense in, but Calderwood kept up the pressure, kept coming forward, and cemented the victory.

What’s next for Calderwood? Well, I try to avoid writing about people I am biased toward. Katlyn Chookagian is a friend and sometimes training partner of mine. However, Chookagian did say on Twitter after the fight that she would fight Calderwood again. The two ladies first fought in June 2019, with Chookagian taking a decision. Chookagian is higher in the rankings, so it’s a good opportunity for Calderwood.

Before we wrap up, I wanted to note that there is no UFC this coming weekend. I need to look elsewhere for fights to preview. I’ve got one or two in mind, but I’d like to see what you think. If you have a fight you are interested in and would like me to preview, please send me a suggestion on Twitter.