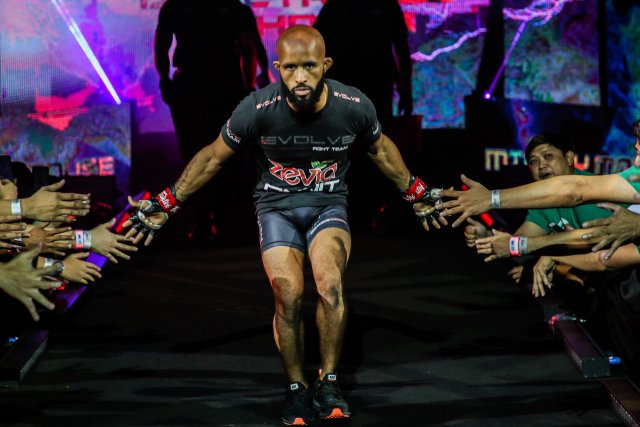 Will Demetrious Johnson Try to Beat Rodtang at His Own Game?

Demetrious “Mighty Mouse” Johnson takes on the ONE flyweight Muay Thai champion Rodtang Jitmuangnon in a unique special-rules bout at ONE Championship: X this Saturday, Mar. 26.

The fight will be four, three-minute rounds with the first and third rounds taking place under Muay Thai rules, and the second and fourth set to be under MMA rules.

Will Mighty Mouse be able to get the better of Rodtang in the Muay Thai rounds?

Ahead of the fight, many fans and analysts are forecasting that Johnson will be cautious in the first round, in order to take the bout to the second, where he would take Jitmuangnon down and finish him. However, Johnson prides himself on his ability to be well-rounded, and this has played a major factor in his success. For this reason, it would not be a surprise if he tries to impose his will on Jitmuangnon in his own realm.

In Muay Thai, Jitmuangnon likes to systematically break down his opponents, but with this bout being contested under special rules, he will almost certainly fight with a greater degree of urgency and look for the finish in the opening stanza. Johnson will be fully aware of this. It will be interesting to see if he possesses the footwork and movement to neutralize a man who has mastered the skill of closing the distance and cutting off his opponents.

Johnson can take confidence in knowing that Jitmuangnon is not renowned for having one-punch knockout power. 10 of his last 11 victories in Muay Thai have been decisions. Furthermore, Johnson has been historically tough to put away, as he has only been finished once in 30 professional MMA bouts. This fact is made even more impressive considering that the American competed at bantamweight for the first 16 fights of his career, as the flyweight division had yet to be introduced in most MMA promotions. During this time, Johnson often faced naturally heavier and significantly taller opponents.

In the first round, Jitmuangnon will likely look to back Johnson up against the fence and land some damaging leg kicks. This will be a smart tactic for him to deploy, because even if he fails to secure the finish here, he will likely inflict damage that would destabilize Johnson for the remainder of the bout. If this does occur, the 34-year-old may not have the mobility to close the distance and shoot for a takedown in the second round. In order to avoid this, Johnson will need to utilize the excellent footwork which has made him an elusive target throughout his career. He will need to be particularly wary of Jitmuangnon’s left hook, which is one of his biggest weapons.

Johnson will be aided by the fact that this contest will take place in an MMA cage as opposed to a Muay Thai or boxing ring. The American is accustomed to competing in this arena and will therefore have confidence in his ability to stop Jitmuangnon from trapping him into a corner. If Johnson decides to try and assert himself against Jitmuangnon in the Muay Thai rounds, he will need to use constant stance switches and feints to prevent the 24-year-old from settling into his trademark marauding style.

If the fight does get to the second frame, Johnson will almost inevitably take Jitmuangnon down. This is where most expect the Washington native to finish the fight. Jitmuangnon has trained jiu-jitsu for the past three years and will have undoubtedly dedicated a lot of his preparation to this department of MMA. He may adopt a defensive strategy in the second round, throwing very little and anticipating the takedown attempt. Johnson will be confident that he will be able to secure a quick submission once he has taken Jitmuangnon down. Many of the best MMA fighters in the world were unable to stop his submissions, so there seems to be little chance of the Thai athlete providing much resistance, regardless of how well prepared he is. Johnson’s stunning flying armbar submission against Ray Borg is widely regarded to be the best UFC submission of all time. This was the most notable example of his ability to pull off submissions in unlikely scenarios.

Johnson will not have a great deal of margin for error when he does close the distance to go for a takedown. The sequence that led to his knockout defeat against Adriano Moraes began when he got caught with a short right hand when he level-changed. He cannot afford to make the same mistake against Jitmuangnon, who is so adept at inflicting damage from close range. His speed and excellent timing of takedowns against an opponent who is a rookie in this area, should mean that he avoids getting countered.

If Johnson grounds Jitmuagnon, he will seemingly be able to decide if he wants to finish the fight right there or to try and challenge himself by letting it go to the third frame and experience another Muay Thai round. It would not be a surprise if Johnson chooses to do the latter, considering he has often deliberately fought his MMA opponents in their strongest area to prove his overall superiority.

Pitting two all-time greats from different disciplines against each other in a special-rules bout promises to result in an intriguing spectacle. For nearly a decade, many regarded Johnson to be peerless in the sport of MMA. Getting the better of someone as accomplished as Jitmuangnon at his own game would add to Johnson’s incredible legacy and support the argument that he is the greatest of all time.