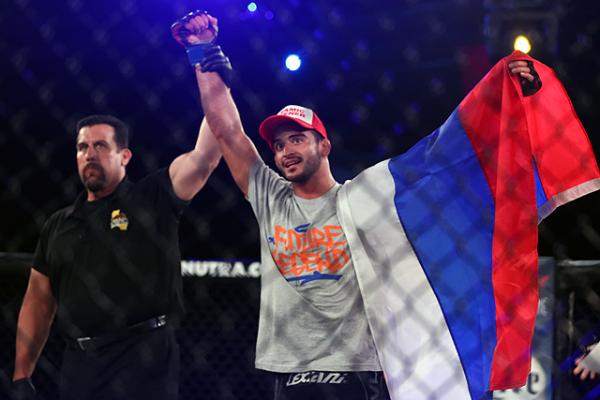 Bellator MMA will end the summer with a bang, taking a trip to Verona, N.Y., and the Turning Stone Casino for Bellator 182 on Aug. 25.

The headlining welterweight fight could prove to work as a title eliminator. Former Bellator welterweight champion Andrey Koreshkov stands in the way of Chidi Njokuani’s title aspirations. Koreshkov is coming off a championship loss to Douglas Lima in his last fight. The Russian is still probably looking at another win or two before he gets another crack at the title, but the chase is certainly on for Njokuani. “Chidi Bang Bang” is riding an eight-fight winning streak, which includes four victories under the Bellator banner.

The co-main event will also take place in the welterweight division, albeit with lesser stakes. Bellator veteran Brennan Ward seeks to start another winning streak when he faces Fernando Gonzalez. Both men have made a recent habit of occupying the co-headlining spot on the card. Ward was riding a four-fight winning streak before he lost in the first round by leg lock against Evangelista Santos. He won his next fight, but he is now coming off a loss to Paul Daley.

Prospect A.J. McKee Jr. also takes his talents to New York, where he meets Blair Tugman in a featherweight battle. The card will also head to the women’s division for a clash between flyweights Bruna Ellen and Veta Arteaga.

The Bellator 182 preliminary-card action will air live on Bellator.com at 7 p.m. ET. The main card airs live on Spike TV at 9 p.m. ET.

Andrey Koreshkov lost his Bellator welterweight title to Douglas Lima in his most recent fight. Now, the Russian is slated to meet Chidi Njokuani, who has quietly posted an 8-0 mark with one no-contest over his last nine fights. Is this redemption time for Koreshkov, or Njokuani’s time to shine on a major stage?

If Njokuani were to win, it surely would be a shining moment in his career. It could even be the win that gets him into a title shot.

Koreshkov is very good at grinding down guys and beating them, though. He’ll stick with this strategy against Njokuani, who does enjoy a nice striking advantage over the former champ. Koreshkov is known for utilizing his size and strength to get the fight to the mat. This is how he defeated Benson Henderson when the former UFC champion was making his Bellator debut. The Russian is notable for having a loss to Ben Askren. Koreshkov was most recently put away by knockout courtesy of the aforementioned Lima by knockout, and this detail should give some hope to Njokuani.

Njokuani needs to follow Lima’s blueprint. Lima didn’t have a great first two rounds against Koreshkov, but he was able to draw the Russian in and make the fight close. Koreshkov overexerted himself and let Lima dictate the striking. Njokuani has the type of powerful striking that could end the fight at any moment. If Njokuani can coax Koreshkov in, then he has a chance to score the knockout.

How effective will Koreshkov’s takedowns be? The former champ had a very successful takedown in the second round against Lima, but he didn’t do much with it besides trying to drain Lima. Lima switched up his game plan in round three and took the victory. Njokuani needs to control the striking game and try to avoid getting taken down at all costs. That’s easier said than done.

Koreshkov will get a little bit of redemption with the win over Njokuani.

Besides the headliners, which other fighters will we be talking about when the dust settles at Bellator 182?

The easy answer to this question is A.J. McKee Jr.

McKee has long been one of the brightest prospects in all of MMA. Bellator has slowly been building him up, and now he draws Blair Tugman. Tugman, while a good veteran, should provide another easy outing for the blue-chip prospect. McKee has scored the finish in six of his eight victories, including five in the first round. It has been a highly impressive run that has shown a complete martial artist forming in Bellator’s featherweight division. With a win, McKee should receive a decent rise to some better competition on a good path to a featherweight title fight.

Beyond McKee, we also have Brennan Ward, who is out to bounce back from a rocky stretch. Ward hasn’t found his stride in his past three fights, going 1-2 in that span. Prior to this slight downturn, Ward was riding a four-fight winning streak and looked well on his way to challenging for the welterweight title. Ward is going to get a tough competitor in Fernando Gonzalez. Gonzalez has been pretty good in his run with Bellator. Gonzalez and Ward are two guys who look to finish and will stand and trade shots with each other, so don’t miss this one.

We’ll also make a stop on the undercard to highlight Chris Honeycutt. Honeycutt was — and arguably still is — a top prospect for Bellator. Honeycutt won his first five fights before falling to Paul Bradley at Bellator 148. Honeycutt responded by rattling off three straight victories. Honeycutt isn’t the most exciting fighter, but his wrestling gets him the win rather assuredly. A win here puts Honeycutt in prime position in the middleweight division.

I am always down for a Ricky Rainey fight. Rainey takes on Marc Stevens in the welterweight division on the undercard. The 34-year-old “Sniper” has won three of his four fights in Bellator by knockout, all pretty spectacular stoppages. Rainey always brings it in his fights. His last outing against Gilbert Smith was something of an anomaly where he was unable to finish his opponent inside of three rounds. Rainey should get the job done yet again against Stevens.