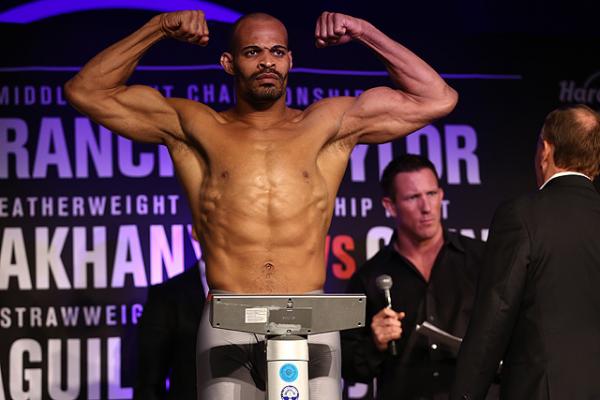 On Thursday, April 9, World Series of Fighting will hold the weigh-ins for its 20th event which takes place Friday, April 10, from the Foxwood Resort Casino in Mashantucket, Conn.

There may not be a title on the line at the event, but the promotion can boast quite a few things about this lineup. It includes a champion seeking to start his journey to a second piece of gold, a former Olympian, a man who overcame the odds as a congenital amputee, a late-replacement, and last, but not least, there’s even a real-life superhero.

The champion is middleweight kingpin David Branch, who shifts his focus to the 205-pound division and the promotion’s light heavyweight tournament. Branch will clash with Jesse McElligott in the tourney’s semifinal round, after his original opponent, Ronny Markes, was forced off the card on weigh-ins day.

The Olympian is Steve Mocco, who looks to rebound from a loss in his WSOF debut. His second WSOF opponent, Juliano Coutinho, is no pushover though. The two big men will kick off the evening’s main card.

The man who overcame the odds is, of course, Nick Newell. Newell came up short in his title bid against Justin Gaethje, but he’ll start his climb back up the ladder when he meets Joe Condon in the co-headliner.

The late replacement is Lucas Montoya, who steps in for Melvin Guillard on less than a week’s notice. He goes from being just one more name on the preliminary card to a featured bout opposite contender Ozzy Dugulubgov.

And then there’s the superhero, Ben Fodor. The welterweight fighter puts his “Phoenix Jones” persona aside to compete in the WSOF cage against Emmanuel Walo.

The fighters hit the scales on Thursday at 5 p.m. ET. A live feed and results appears below.