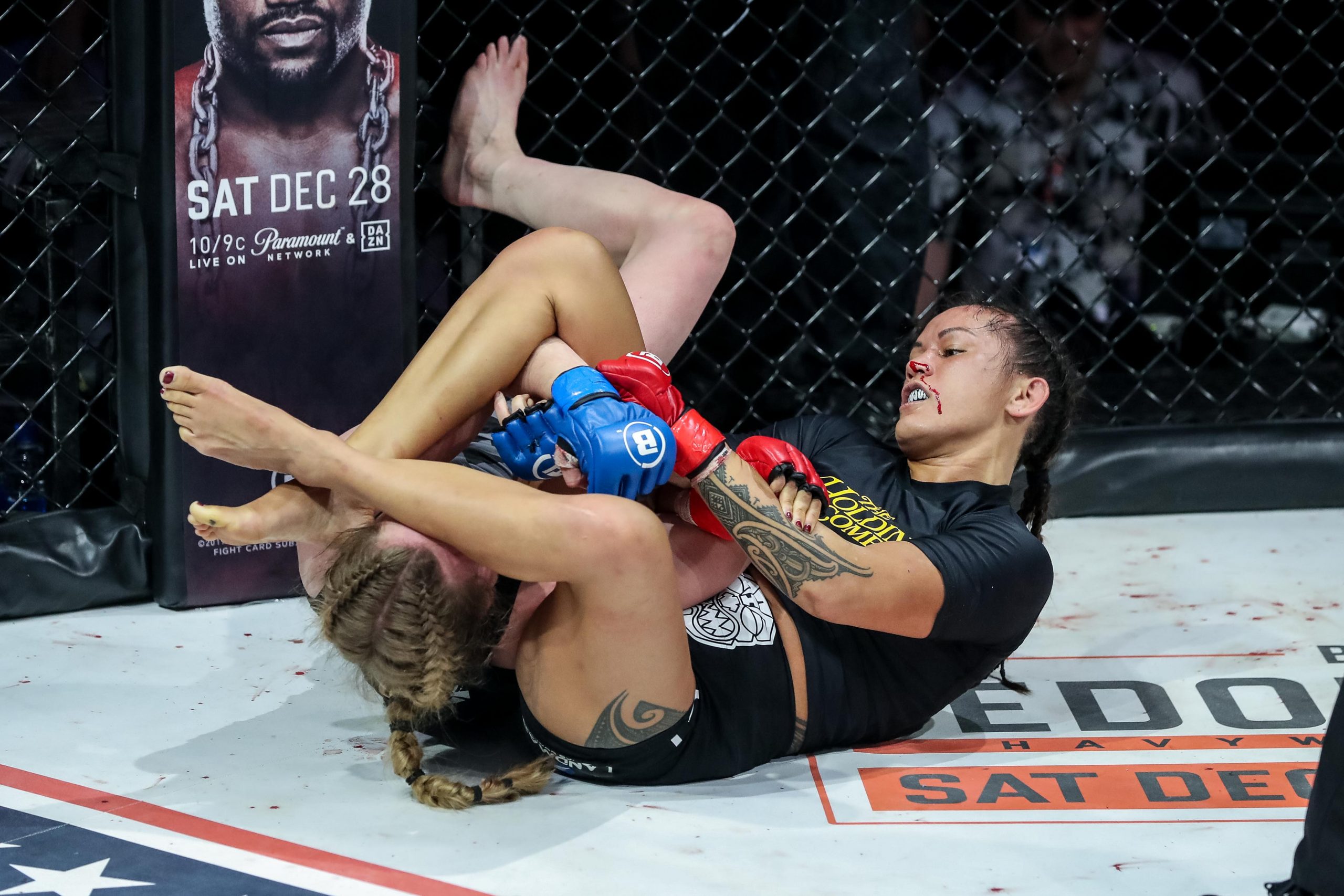 Aptly nicknamed “The Ilimanator,” Illima-Lei Macfarlane has the ability to rock you like a hurricane and put you in a cavalcade of despair, which has resulted in eight stoppages and a perfect record through 11 fights as a professional. The 30-year-old champ, who has never tasted defeat in her entire MMA career even as an amateur, will look for her fifth successful title defense when she goes up against Juliana Velasquez in the main event of Bellator 254.

It is well known in the MMA stratosphere that Hawaiian fighters exude the coveted warrior spirit that many desire but few have. Macfarlane, like B.J. Penn and Max Holloway before her, has paved her own path of greatness. She captured Bellator’s women’s flyweight title at Bellator 186 in 2017 in a heart-pounding sequel bout against Emily Ducote to become the promotion’s first and only 125-pound captor.

While this will not be the first time that Macfarlane is facing an undefeated prospect, Velasquez represents easily the biggest threat to her hold on the throne. The Brazilian has passed every single test hurled at her in the Bellator cage with flying colors. She has gone 5-0 since being ushered into the promotion in 2017. The Team Nogueira gym fighter will be two inches taller and have a one-inch reach advantage against the champ on fight night. Will it be enough?

In another of the evening’s featured bouts, Linton Vassell battles former Professional Fighters League and UFC talent Ronny Markes in a fight billed as taking place within the heavyweight division. Markes embarks on a heavyweight journey after showing up to his last fight, a light-heavyweight bout against Sigi Pesaleli during the PFL’s 2019 regular season, six pounds above the 205-pound limit.

Bellator 254 will showcase nine total fights under the lights of the Mohegan Sun Arena in Uncasville, Conn., on Thursday, Dec. 10. The 10 p.m. ET main card will be televised on the CBS Sports Network and DAZN, while the preceding 7:30 p.m. ET prelims can be seen on DAZN and Bellator MMA’s YouTube channel.

How big of a threat does Juliana Velasquez pose to women’s flyweight champion Ilima-Lei Macfarlane?

Much like Arlene Blencowe, who last fought against Cristiane “Cyborg” Justino at Bellator 249 earlier this year for the featherweight title, Velasquez prefers to have the fight standing. This was well demonstrated in her clash against Alejandra Lara two years ago. Velasquez successfully scored a takedown, but she allowed Lara to stand back up in the middle stanza en route to a split-decision win. The main difference between Velasquez and Blencowe, however, is that Velasquez has tremendous power packed in her punches that can end a fight at a moment’s notice. It is remarkable that she started her career as a bantamweight.

It was this aforementioned gift that allowed Velasquez to put away Elaine Albuquerque with a looping left hand in the first round of her first and only bantamweight title defense for Brazilian promotion 1° Round Combat four years ago. This orchestra of violence came together again in her third fight for Bellator against Kristina Williams in which she continuously landed so many combinations to a point where viewers could visibly see Williams fading away while trying to put on a brave face.

If Velasquez can keep this fight with Macfarlane on its feet, she could steal the belt. This is why a smart route to victory for MacFarlane would be to take the fight immediately to the ground and utilize her grappling, which is far superior to that of Velasquez. Velasquez prides herself as a well-rounded fighter, and very few can dispute that claim. However, her one win by submission pales in comparison to the current champion’s six. MacFarlane is very aggressive in her approach, and Velasquez would need to match this aggression to tilt the seesaw in her favor on points.

It is on the ground that we have seen Macfarlane’s best work in the cage. While it was ultimately ruled as a finish via a triangle choke in the third round of a championship fight at Bellator 213, she made Valérie Létourneau tap because of elbow strikes thrown while having secured a figure-four headlock. Then, in her third consecutive third-round finish against Veta Arteaga, MacFarlane landed an elbow while in her opponent’s guard that opened up a gash on Arteaga’s forehead so big that the blood seeping out dyed her hair red. This led to the fight stoppage.

This card features a number of undefeated prospects, including Grant Neal, Romero Cotton and Shamil Nikaev. Which of these fighters emerges unscathed?

Following the news of the withdrawal of his original opponent Tyree Fortune, Neal, a light heavyweight, will now fight an undersized Maurice Jackson, who normally competes at middleweight and welterweight.

The prospect you want your eyes and money on, though, is Cotton. He takes on Justin Sumter in a fight that was supposed to happen in March before it was scrapped due to the coronavirus (COVID-19) pandemic.

Cotton is a late bloomer in MMA. He had his first professional fight at the age of 27 and has made three more appearances since. While he didn’t waltz into the sport completely on a whim — he is a three-time NCAA Division II national champion wrestler — you can still tell that he is experiencing incremental improvement after each fight. Cotton was rewarded a split-decision win in his promotional debut against Aaron Rodriguez at Bellator 181. It was in this fight, however, that it was evident how he wasn’t sure how to respond to the grappling, so he was heavily relying on his corner for step-by-step instructions. The current circumstances that sports are operating under because of the pandemic could prove useful to him once more, allowing him to hear his corner without the noise of a crowd in attendance.

Sumter has had a number of submission finishes in his career, so it seems the best way for Cotton to get good results is to keep the fight standing as much as possible. However, what Cotton has seen unfold before him epitomizes the unpredictability of the sport. In his contest at Bellator 233, he recorded another win on his record for just over two minutes of work after his opponent Jason Perrotta’s knee buckled and he couldn’t continue. Then he knocked out Willie Whitehead with multiple knees to the head in the clinch with 48 seconds to spare in the first round after still agreeing to the fight despite Whitehead showing up 15 pounds overweight. It’s Cotton’s ability to persevere in a sport so unforgiving that has him poised for success.

Not only is Goichi Yamauchi one of the most exciting fighters in the lightweight division, but in all of Bellator as well. He isn’t even 30 years old yet and has fought 29 times since bursting onto the scene against Andre Pedroso on the Brazilian regional circuit a decade ago.

Yamauchi’s grappling and elite Brazilian Jiu-Jitsu game is the puppeteer behind all of his triumphs in the cage, where he has tallied 20 of his 25 wins by submission. His striking and inability to be trigger-happy has made his style of fighting unfavorable when it comes to scoring decisions, with all four of his losses coming on the scorecards. If the Japanese-born fighter defeats Nate Andrews on Thursday, then it’s not hard to imagine that he will get a lightweight title shot. It’s puzzling how his name was never called for such an opportunity already, but another win in any fashion will get him there. He’s already beaten the top guys in his division, including Adam Piccolotti, Saad Awad and Daniel Weichel.

Andrews, Yamauchi’s opponent for Bellator 254, is set for his promotional debut, and the matchmakers must think very highly of him. He was originally supposed to fight Killys Mota in March before the event was scrapped in the wake of the pandemic. He spent all of 2019 with the Professional Fighters League, where he went 1-2 in three matches. Andrews was also the former lightweight champion for CES MMA. He successfully defended his title twice against D’Juan Owens and Bryce Logan after defeating Chris Padilla at CES 49 for the vacant strap. While 10 of his 16 wins have come by submission, Andrews is more of a striker who has a good grasp on how to execute front chokes.