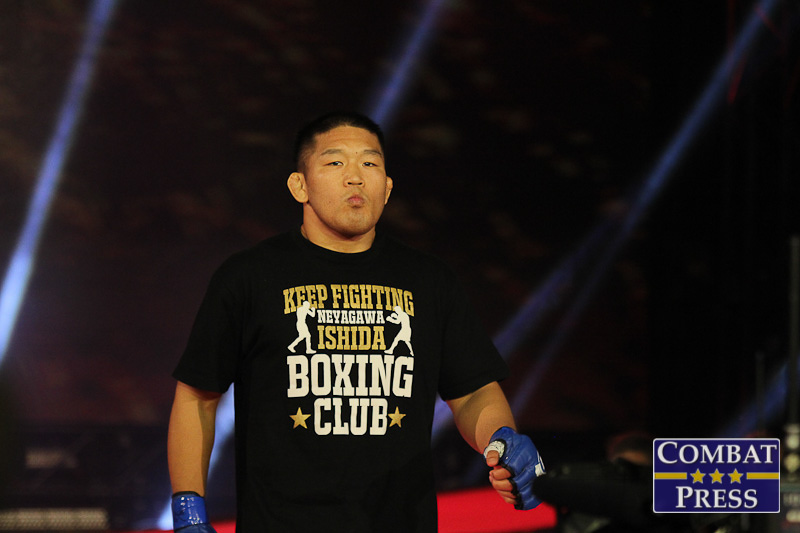 The Legacy Fighting Alliance continues its run of shows at the Sanford Pentagon in Sioux Falls, S.D., on Friday with its 90th effort. The headliner features two undefeated fighters in a showdown for the vacant bantamweight title. Zviad Lazishvili, who hails from the nation of Georgia, is the more experienced of the two men, but he faces a dangerous opponent in The Ultimate Fighter alum Ricky Steele.

The 28-year-old Lazishvili trains out of Kaizen MMA in Virginia, and he has also spent time in the past with Colorado’s Elevation Fight Team. He made his pro debut in 2011 and stormed through 11 rookie opponents before taking a hiatus from the sport. After more than four years on the sidelines, Lazishvili returned in 2019 and finally fought an experienced opponent when he clashed with World Series of Fighting veteran Josh Huber at LFA 79. Lazishvili was able to get the better of Huber and take the decision nod.

Steele, 32, doesn’t have quite as long of a resume, but he has consistently fought more experienced competition than what Lazishvili has encountered. Steele tallied two wins as an amateur and then made his pro turn in 2013. His first victory came against Tony Sanchez, who was 4-1 at the time. By his third fight, “The Karate Kid” was competing under the Resurrection Fighting Alliance banner. He accounted for Jay Pressley’s first pro defeat and also decisioned LJ Schulz while fighting for the RFA. Steele then competed on season 27 of TUF, where he topped Suman Mokhtarian before bowing out of the reality series with a concussion. The UFC brass gave him another chance when they booked his on Dana White’s Contender Series, where he was again responsible for handing out a career-first loss, this time to Phil Caracappa.

The Idaho-based Steele has already developed a reputation for spoiling formerly unblemished records. He has also seen some strong competition thanks to his stints with the RFA and the UFC’s recruiting leagues. While his win over Mokhtarian on TUF doesn’t count on either fighter’s official record, Mokhtarian was undefeated as a pro at the time of their contest. Steele exposed Pressley, who is now a mediocre 6-3, and Mokhtarian, who has since lost both of his official UFC bouts, as beatable fighters.

Lazishvili appears to be a strong grappler. He’s secured eight submission victories throughout his career. However, all of those finishes came against debuting pros. Of those rookie opponents, eight have not had any additional pro fights since their respective losses to Lazishvili and the remaining three have combined for a 4-11 pro mark. Lazishvili’s only true test thus far came against Huber, who has had his ups and downs.

Lazishvili has a lot to prove in this championship affair. He’s giving up five inches in height and reach to Steele, who has proven adept at outpointing his opponents. The most obvious outcome here would be another decision nod for Steele.

The thin slate of regional and international events this weekend has led to a shortened preview in this series. Beyond the latest LFA event, only Germany’s Elite MMA Championship organization features a fight worth mentioning here. That contest is a heavyweight title tilt featuring Satoshi Ishii and Stuart Austin.

Ishii, an Olympic gold medalist in judo, made his pro MMA debut in late 2009. In just a little over a decade in the sport, he has made stops in K-1, Dream, M-1 Challenge, Rizin, Bellator, KSW and the Professional Fighters League. He’s shared the ring/cage with the likes of Fedor Emelianenko, Tim Sylvia, Pedro Rizzo, Phil De Fries, Mirko “Cro Cop” Filipovic, Jiří Procházka, Quinton “Rampage” Jackson, Muhammed “King Mo” Lawal, Ivan Shtyrkov, Jared Rosholt and Denis Goltsov. However, the 33-year-old has had extremely mixed results throughout his career. He found little success in Bellator and the PFL, and he’s had a couple of three-fight skids during his career.

Austin is a 20-fight veteran, but he hasn’t enjoyed the same level of attention as his more famous counterpart. The British fighter debuted in 2010 and won his first eight outings. The last of those victories came with Bellator, where he then suffered his first pro loss courtesy of Dan Charles. “He-Man” joined BAMMA next and actually submitted recent UFC addition Tom Aspinall before enjoying a brief title reign. He lost the BAMMA strap to Mark Godbeer. Austin took to the life of a journeyman after the defeat. He’s gone on to fight for several promotions, most notably South Africa’s EFC Worldwide. He has gone 4-3 while bouncing between the light-heavyweight and heavyweight divisions in this stretch of time. Two of the 32-year-old’s recent setbacks have come against fighters who have gone on to the UFC, most notably Johnny Walker.

This is essentially a “cruiserweight” contest between two heavyweights who typically tilt the scales in the neighborhood of 230 pounds. This means neither man will have a significant weight advantage. In terms of height and reach, however, Austin is the larger man. He stands five inches taller than Ishii, and he’ll enjoy three inches in reach. He’ll need to use his length to stay on the outside and look for the knockout. Ishii has been starched on six occasions, so a big finish certainly isn’t out of the question for Austin.

If Ishii can close the distance and use his judo skills to put Austin on the mat, then the tables turn. Ishii has recorded 11 submission victories and could be a threat for the finish. However, Austin tends to live and die in the stand-up realm. The Brit has been dropped by five opponents, but he’s never been tapped.

Ishii can’t seem to turn the corner and truly put his judo talents to proper use in MMA competition. He is capable of occasionally flashing his grappling prowess, but it’s tough to predict when those skills will carry him to victory. Fights that seem winnable for the Japanese star — his PFL encounters with Jake Heun and the inexperienced Zeke Tuinei-Wily — have either ended in disaster or, in the case of the latter bout, an uncomfortably tight decision. Austin is just scrappy enough to cause another headache for Ishii in the same vein as he experienced in the outing against Heun.