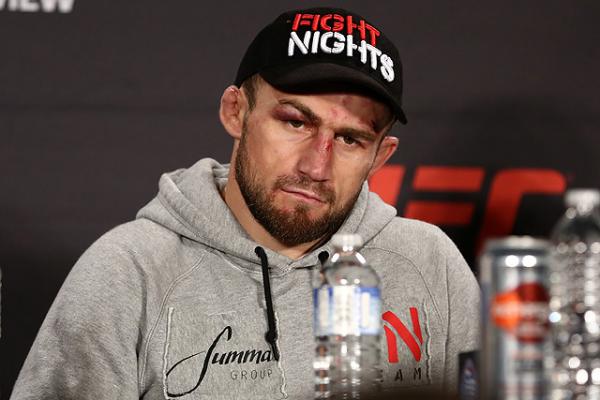 Combate Americas has a healthy featherweight division, which will be on full display on Friday in Monterrey, Mexico. Levy Saúl Marroquin is featured in a bout against Enrique Gonzalez, but the man who handed Marroquin a loss in April is also on the card. Alejandro Flores is out to add to his impressive 16-2 record when he collides with Marco Antonio Elpidio in the night’s co-headliner.

Flores still has just one appearance outside of Mexico, and it came in Costa Rica. It marked his first defeat, as “Gallito” succumbed to a submission at the hands of grizzled veteran Alandro Solano Rodriguez. The 28-year-old, who debuted in 2013, won his prior eight fights. Along the way, he scored six stoppages. After his loss, Flores bounced back for an additional seven victories, including featherweight and lightweight championship wins under the Combate Extremo banner. He added two more victories in a one-night tournament at Combate 29, where his opponents included Bellator veteran Pablo Villaseca. Flores did suffer another loss, though — he was finished with a spinning elbow by The Ultimate Fighter 22 alum Andrés Quintana in the finals of that one-night bracket. Flores returned in April and notched the decision win over Marroquin. The VFS Academy product is up to six knockouts and two submission victories in his career.

Elpidio also debuted in 2013, but to mixed results. His first fight ended in a draw against Alberto Sanchez, a winless fighter at the time who now holds a 5-8-1 record. “La Roca” won his next three fights, including a rematch with Sanchez. He ran into more trouble in 2015 when he was stopped by Alvaro Enriquez, another fighter with a losing record. The Renzo Gracie disciple again added three more wins to his resume, but only one of those wins came against an opponent with a significant winning margin on his record. In his second Combate appearance, Elpidio dropped a split verdict to Erick Gonzalez. He recovered with a victory over Jose Luis Verdugo, but then lost via unanimous decision against the aforementioned Quintana. Elpidio has since bounced back to the tune of two straight victories.

This is clearly Flores’ fight to lose. Elpidio has had a rocky road throughout his career, although some of this could be attributed to his time in the welterweight and lightweight divisions. However, his only previous featherweight outing ended in defeat against Quintana. The Mexico City native will have an uphill battle against one of Combate’s best fighters.

Flores stepped it up in his one-night tournament appearance, where he faced a set of opponents that had combined for a 34-6 mark. He won the quarterfinal with a first-round submission and went the distance against Pablo Villaseca before falling to Quintana in the first frame of the finals. His recent decision nod over Marroquin further solidified his standing as a top dog at 145 pounds.

Elpidio has become a tough out. He has seen the scorecards, win or lose, in his last six fights. Even his one stoppage loss came when he could not answer the bell for the third round. He’s not much of a threat on the feet, and he’s only managed a couple of submission wins. Barring a complete fluke of a knockout, Elpidio doesn’t appear to have a clear path to victory against someone of Flores’ skill level. Flores should cruise to a decision in this one.

The most stacked event of this weekend’s regional offerings is definitely M-1 Challenge 105. The lineup includes two title fights, several notable veterans, and plenty of prospects. While the flyweight title tilt between Chris Kelades and Arman Ashimov is an intriguing affair, it can’t top the bantamweight championship contest between titleholder Sergey Morozov and challenger Josh Rettinghouse.

The 30-year-old Morozov is set to make the first defense of the title he won in late June when he stopped Aleksandr Osetrov with punches in the fourth round of their bout. It was the culmination of a four-fight recovery since his last loss, which came in a previous bantamweight title bid against Movsar Evloev. The Kazakh fighter has been a mainstay of the M-1 promotion for much of his career. He debuted in 2008 and compiled a seven-fight winning streak in official competition by mid-2015, but he also went 5-1 in exhibition action for the World Mixed Martial Arts Association during this time. In the 2015 WMMAA finals, he was submitted by Bakhachali Bakhachaliev. In pro competition, he went on to lose to Pavel Vitruk. After adding two more wins, Morozov was put away via strikes by his upcoming opponent, Rettinghouse. He added an additional two victories before his setback against Evloev.

Rettinghouse had a brief stint on the big stage when he fought twice for the World Series of Fighting. He won the first of those affairs with a nod over Alexis Vila. He wasn’t so fortunate when he ran into the buzzsaw that is current UFC contender Marlon Moraes. After dropping a decision to Moraes, Rettinghouse departed the WSOF, but he lost his next fight via submission to Josh Hill. The American is now on a six-fight tear across the King of the Cage and M-1 promotions. The 29-year-old “Finisher” has lived up to his moniker with seven career submissions and five knockouts. Four of those 12 total stoppages, including his finish of Morozov, have come over the course of his current streak.

It’s always logical to judge a rematch by the first fight. In this case, we only have four and a half minutes of footage to utilize, but that should be enough. Rettinghouse, while more flat-footed overall, tended to surge forward while throwing powerful combinations. He landed several times with big right hands. Morozov wasn’t able to effectively tie up Rettinghouse, and his own punching flurries didn’t appear to have much behind them. When the Kazakh fighter did get within range to land damaging strikes, Rettinghouse easily deflected them. The American also threatened with the takedown, which, combined with his forward movement during combinations, seemed to keep Morozov from getting comfortable.

Morozov will have to make a lot of adjustments if he wants to avenge his prior loss. Rettinghouse isn’t a perfect fighter, but he definitely had an answer for everything Morozov threw at him. The American has an edge in speed and power, and his well-rounded game leaves Morozov with few options. The Kazakh fighter has picked up eight knockout wins in his career, but he hardly touched Rettinghouse’s chin. Unless he can punish Rettinghouse’s body and hope for a money-in-the-bank style of late finish, Morozov won’t find much success here. We’re likely to see more of Rettinghouse exploding forward with two- and three-punch combos until he finds a home for his right hand. Not all rematches are repeats of the first encounter, but this one should be, right up to the knockout finish.

Sure, we’d love to focus on Maxim Butorin’s fight at the 95th edition of Fight Nights Global. So, why aren’t we? Well, Butorin’s level of competition could use a huge boost from the 4-3-1 opponent he has lined up for Saturday. Instead, let’s turn to the title affair between flyweights Ali Bagautinov and Zhalgas Zhumagulov.

Bagautinov, the champion, should be a familiar name to fight fans. The 34-year-old had a seven-fight tenure with the UFC that included a flyweight title challenge against Demetrious “Mighty Mouse” Johnson and a subsequent suspension for the use of EPO prior to the championship showdown. The Russian departed the UFC in late 2016 after a loss to Kyoji Horiguchi and returned to his pre-UFC home with FNG. The skilled combat-sambo practitioner logged Octagon wins over Tim Elliott and John Lineker before challenging for the belt. After his loss to Mighty Mouse, Bagautinov dropped three of his next four fights. He’s now on a five-fight winning streak.

The 31-year-old challenger Zhumagulov is no slouch. The Kazakh fighter debuted in 2014 and won his first six fights. He ran into some trouble in 2015 when he suffered losses to Vartan Asatryan and Zhifa Shang, but he rebounded with three victories, including a first-round finish of Artur Bagautinov. He stumbled again in a rematch with Asatryan, but has since added three more victories, including decisions over current UFC fighter Tyson Nam and the formerly undefeated Tagir Ulanbekov. “Zhako” tends to look for the knockout, but he’s been far more likely to go the distance since arriving in FNG.

Bagautinov’s legacy has been tarnished by his use of performance-enhancing substances. His UFC title challenge was not the only instance in which the Russian attempted to cheat, only to get caught. He was stripped of his combat-sambo world championship after popping positive for methylhexanamine. This raises some questions as to the legitimacy of Bagautinov’s accomplishments. It doesn’t help that he lost three of his first four bouts after serving his suspension.

Bagautinov has seemingly regained his stride, however, and rules over the M-1 flyweight roost. Zhumagulov has performed surprisingly well against an elevated level of competition, so an upset is not out of the question. His Russian counterpart is just ridiculously skilled in a variety of martial arts, including wrestling, jiu-jitsu and, of course, combat sambo. Bagautinov is capable of outworking tough opponents over the course of three or five rounds, and he can blast lesser competition for knockout victories, too. Zhumagulov has been stopped via strikes before, so the former UFC title challenger and current FNG champion could be in line for a finish here.