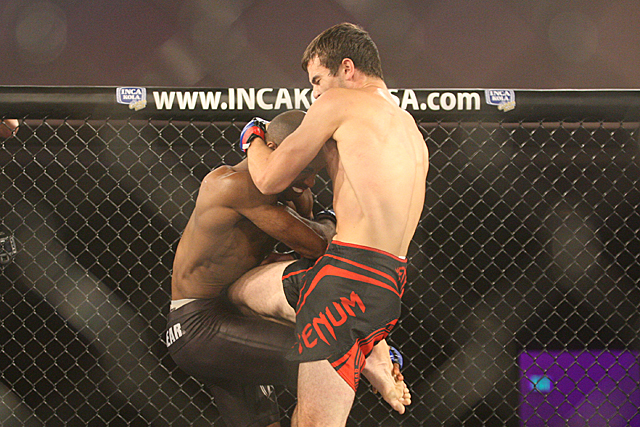 The best things in life can come from applied pressure. Most guys would consider the idea of having a father-in-law to be a scary, pressure-filled experience unlike most others. However, dating the daughter of the guy that trains you to fight carries a whole other level of paranoia.

When Dakota “Hairy” Bush was growing up as a high school wrestler in St. Clair, Mo., he wasn’t thinking about training to be an MMA fighter. He figured he would just go to college, wrestle there, and then move on to his next stage of life. However, the next step did not pan out as expected.

“It kind of didn’t sit well with me,” Bush told Combat Press. “College is a different animal than high school wrestling. Growing up, my dad actually fought as an amateur. He has around 10 fights, and he fought for a promotion called Cage Championships, and that was actually where I had my first amateur fight.”

Cage Championships MMA is owned by Patrick Smith, who also runs the Smith Pit in Cuba, Mo. The promotion’s 54th event took place in January 2015 and served as Bush’s pro debut. It was before this fight that he began training under Smith.

“I originally started training on my own, really,” Bush said. “I was just wrestling people. I wasn’t really fighting. I was just taking them down and TKOing them or submitting them. I was 9-1, and that’s when I started training with Patrick. I’m 6-1 as a pro now with them.”

Bush has only suffered one amateur loss and one pro loss. He has 15 combined wins, but his biggest achievement came outside the cage. He met Gabbie, who would go on to become his wife, at one of her dad’s events.

“I was training with my [future] father-in-law, and he had a show, and I went to the show,” Bush explained. “She was there, and we kind of hit it off. When we told him, I was scared to death about what was going to happen. It ended up being the best thing, and we have a little boy who’s three years old and another one on the way right now. Things are busy right now, but pressure builds diamonds.”

Bush and his wife have their son, Braxton, and a little girl coming in October. While Bush maintains a full schedule of training, he holds down a full-time job as well. When he was a senior in college, he landed a skilled labor job through a friend’s dad that he still has to this day.

“I’m a hard-working American that puts in an honest day’s work. I’m a union sheet metal worker,” said Bush. “I’ve got to provide for my family and pay the bills still. I just want everyone out there to see somebody is putting in 40 hours a week just like they do, but he’s still putting in the work to make something out of his life.”

Bush has had a very successful MMA career as he slowly climbs the ranks. With notable wins over more experienced opponents like Jose Martinez and Jordin Hinman on the Legacy Fighting Alliance stage, he landed a spot as the co-main event at Friday’s LFA 67 card. He goes up against Jaleel Willis.

“He’s 9-2, and his only two losses are to one guy who is in the UFC now and […] the guy who actually just won the LFA title,” said the lightweight fighter. “He’s lost only to tough dudes. He’s explosive. He’s supposed to be a pretty good wrestler, and he’s dangerous if you let him be. Unless he can really offset me, I think it’s going to be a good fight for me. I know what it takes to beat him. I’m excited for it.”

When Bush is not working with sheet metal or spending time with his family, he is training to be the best fighter possible. A couple days per week, he will go up to St. Charles MMA, about 45 minutes away. He also trains strength and conditioning with two of his friends. He is also a protégé of UFC veteran Jake Collier. Most of his training takes place with Smith, though.

The results have been impressive. In his last win over the aforementioned Hinman, Bush locked in a rear-naked choke halfway through the first round. The win put his LFA record at 3-1, with all three victories coming by way of the same choke.

“It didn’t go the way I thought it was going to go,” Bush admitted. “Jordin’s a really scrappy dude and tough, and we really just wanted to pick him apart on the feet. He’s the perfect candidate for it. But he kind of bum-rushed me and tried bringing the fight to me and ended up in a wrestling scramble. I ended up taking his back and choking him to sleep. I was happy with the win, definitely, but it was not how I expected it to go. I choked him to sleep really quickly. It got some eyes looking.”

Those eyes belong to the LFA. Usually where there are LFA eyes, the UFC is close behind. Most LFA champions end up with UFC contracts, and a win over Willis will certainly put Bush within striking distance of an LFA lightweight title bid.

With the little time the man they call “Hairy” has left after training, working and family, he likes to hunt turkey and fish the local bass and trout. Growing up in Missouri came with many outdoor activities, and it’s his ancestry that gave him his great nickname.

“My grandpa and my uncle’s names were Harold, so growing up they all got called ‘Harry Bush’ and got shit given to them,” Bush said. “When I was growing up, people would call me ‘Little Harry’ after them. When I started fighting, I was looking for a name, and that was quick and easy and rolls off the tongue.”

Bush has a lot of moving parts in his life, but he’s just trying to be like that aforementioned diamond. A lot of pressure — whether it’s the pressure of wrestling, the pressure of dating his trainer’s daughter, or the pressure of managing multiple careers — has brought him to where he is today.