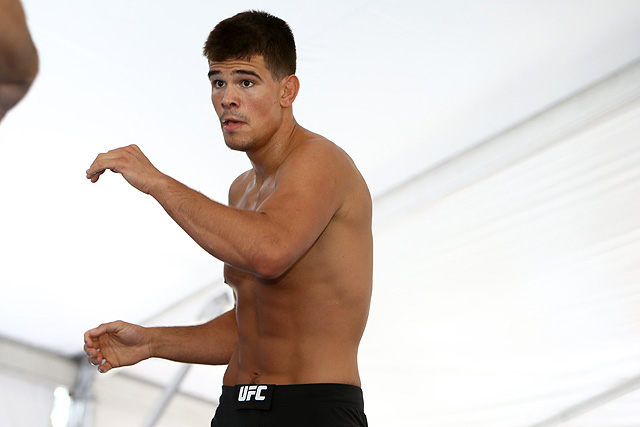 Just one fight. It came against a fighter who had no previous experience, but it came inside the confines of the UFC’s Octagon. It was enough to signal that Mickey Gall has arrived.

Gall defeated former WWE superstar Phil “CM Punk” Brooks at UFC 203 in a fight he asked for after being featured on UFC President Dana White’s Lookin’ for a Fight web series.

Following his win on White’s show, Gall grabbed the microphone and showed he has a plan for himself and the UFC. With an impressed White listening, Gall pleaded that he wanted CM Punk, who was looking to make his own UFC debut. Shortly after, Gall’s wish was granted.

Their original bout date was pushed back while Punk dealt with a herniated disc in his back. While Punk recovered, Gall defeated Mike Jackson at UFC Fight Night 82. The end came in just 45 seconds when Gall slapped on a rear-naked choke to submit Legacy FC’s photographer-turned-fighter. Following his win over Jackson, Gall once again pleaded to UFC matchmaker Joe Silva and the entire UFC to “feed me CM Punk, please!” Then, Punk stepped into the Octagon for a friendly face-off.

The friendliness was lost when the Octagon door closed at UFC 203 in Cleveland and the long-awaited fight between Gall and Punk finally took place. It didn’t last long. Punk’s inexperience was quite frankly no match for the pure talent and dominance of Gall. At just 2:14 of the first round, Gall submitted one of the WWE’s biggest former superstars.

Gall has had just two fights in the UFC and has spent less than a combined three minutes inside the Octagon, but he has figured it out. He’s got the pure talent. He’s young. He’s dominant — so far. Yet, even more promising for the UFC, Gall can talk. He had respect and complimentary words for Punk, but he quickly turned his attention to another young superstar, Sage Northcutt, who was also found on Lookin’ for a Fight.

What we’ve learned in 2016 is that losses do hurt. They do damage a fighter’s image in the social media world. Gall may eventually lose, but until he does, the UFC should cater to him. A young fighter normally doesn’t have it all figured out. They don’t know where they want to go after a fight or when their next fight will come, but Gall knows. He is playing his cards right, and it couldn’t work out better for both the fighter and the promotion.

In a way that Conor McGregor has made his fortunes in the UFC, Gall has called for his fights, delivered on those fights, and made statements on the microphone that get everyone excited for his next appearance. This is what the UFC has come to — young and old fighters using social media or the microphone to call their shots, get their shots and deliver.

We’ve seen the rise of young superstars Paige VanZant and the aforementioned Northcutt. Now, we can add Mickey Gall to the list. While many didn’t believe in CM Punk to begin with, it’s hard to believe that many thought Gall would be this impressive right away. He’s made his mark, and when Gall steps in the Octagon to take on Northcutt, or whomever the UFC puts in front of him next, fans will be watching.

Gall is the UFC’s next superstar, whether you want to believe it or not.