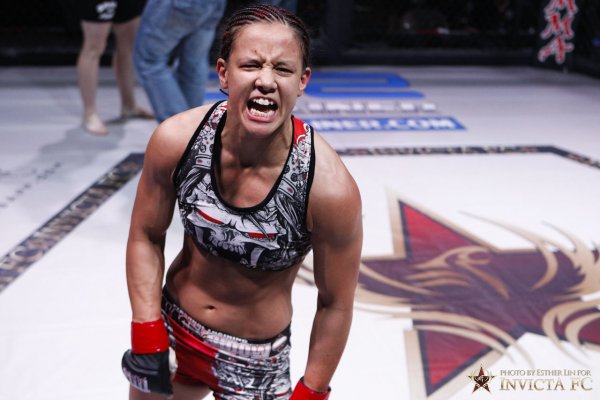 For Love and Gas Money: Shayna Baszler’s Long Road to the UFC

It has been such a long, hard road, and most of you don’t even realize the reality of that statement. Most of you only know about me having to miss two fights because of injury. Most of you don’t know about fighting back in a day when no one knew what MMA was. Heck, it wasn’t even MMA yet! It was NHB—No Holds Barred. Back when it was worth bragging about if you got a hotel room paid for. When your “purse” made it so that you were broke even after factoring in the gas money it took to get to shows. Standing room only crowds that could jump in the cage any time during the night to be the next badass. No one trained. And women certainly didn’t have a place yet. The sport itself didn’t have a place yet! I haven’t just watched the sport become a mainstream trend, I have lived it.

I have headlined cards, performed in front of tens of thousands of fans in the biggest arenas in the country. I have fought on network television and pay-per-view cards alike. I have felt the turn of fans, how fickle they can be. A hero in their eyes after every win, the next big thing. Then an overrated no one the very second you lose. I have been beaten badly enough to be mistaken for Sloth from The Goonies. I have won fights with submissions that people didn’t even know existed. I have been “Fight of the Night” and “Submission of the Night,” and even scored “Submission of the Year” once. I have been ranked in the top 10—even top three at one time. I have been the surprising up-and-comer, I have been the here-and-now top dog, and I have been the grizzled has-been. I have experienced nearly every high and low that MMA has to offer someone. But there are still lessons to be learned.

Social media has changed things. You see, everyone seems to understand that MMA is a sport that the toughest people succeed in. But everyone is a tough guy on social media. There’s no personal accountability, so why not be the badass you wish you were in real life? But I have learned a lot there, too.

I have learned that no matter what we do or say, fans will make it to be whatever it is they want it to be. The only person Ronda Rousey has ever been disrespectful to is Miesha Tate, and they have history. But, for some reason, I hear people talk about her being so disrespectful all the time. Everything she says is taken and twisted for that agenda. And we are Ronda’s friends, but by proxy, we are made out to be disrespectful, too. Marina Shafir did nothing disrespectful to her last opponent. But because we are friends with Ronda, it is assumed she did. It doesn’t matter what we do or say, it won’t change anyone’s mind. But I have also learned that is quite freeing. I can say whatever I want! I never called Bethe Correia out. I simply pointed out, if Ronda had done something like that four-finger thing Bethe did, she would have gotten booed out of the arena and social media would have been abuzz with how “someone needs to beat that disrespectful bitch” or something along those lines. It’s very true. Think about that double standard.

I have learned that fans aren’t just fickle as fans. A great many of them are fickle as people, too. We are a team. A family. We live and train together. We see the struggles and triumphs that are hidden from the media. And not just at the gym, like some teams. Living together means we experience each other’s roads in our relationships and lives. All of this creates a bond that is so much bigger than wins and losses. And to suggest that we kick anybody out, or stop considering ourselves a team simply because someone lost? I feel bad that most of the social media world doesn’t know what it’s like to share something bigger than that. Something that losses and mistakes and growing pains can’t break. We are a team. A family. I have seen the achievements that you haven’t, behind the closed doors. And I have been through much myself, only to turn around and see my family members standing steadfast and proud behind me. I will proudly hold these four fingers up, despite how fickle people think we should give up. Because that’s what loyalty is.

Most of all, I have learned fighting isn’t about wins and losses. It’s so much bigger than that. When a fighter gets into that cage, they are sharing their journey. Every tear, every ass beating they have taken in the gym and in life, every step they were too sore to take but took anyway, every lesson learned, easily or hard—it’s all there. Everyone has a reason they are fighting a certain fight. Everyone has a story. And love us or hate us, fans care more about the story of a fight than the fight itself.

So this Saturday, it’s me in there, sharing with you my story. From the beginnings of a sport that I did for love and gas money. As I climb those steps into the Octagon, remember, it’s not just about Bethe and her hand gesture. My story is a long one, a much longer one than that. And it has all the elements a good story needs—struggle, triumphs, romantic side stories, hilarious outtakes—but most of all, it is epic. And the best part of every epic tale is that for some reason, the hero never dies.