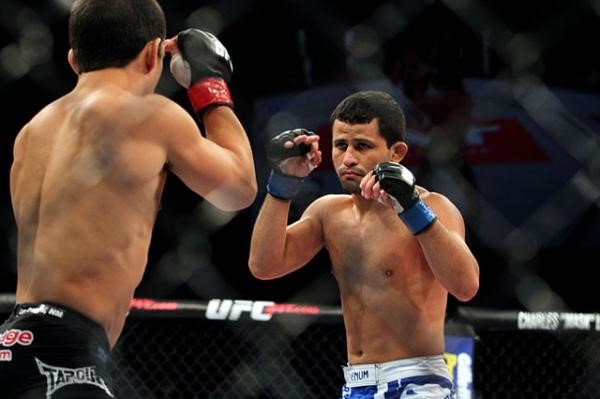 The State of the UFC Flyweight Division

The news of T.J. Dillashaw vacating his bantamweight title on the heels of a failed drug test and a one-year suspension from the New York State Athletic Commission will end up having as big an impact, or bigger, on the flyweight division as it does the bantamweight division, which is now without a champion.

Logic would dictate that, with the Dillashaw rematch off the table for now, Henry Cejudo would defend his flyweight title against the top contender in the 125-pound division, giving that weight class a stay of execution for now. However, UFC President Dana White, speaking with Heidi Androl after UFC on ESPN+ 6, announced his plan for Cejudo to move up to bantamweight and challenge Marlon Moraes for the vacant title. Meanwhile, White plans to pit Jussier “Formiga” da Silva against Joseph Benavidez in a No. 1 contender’s fight in a rematch of a 2013 bout that Benavidez won via first-round TKO.

Of all the options on the table, this makes the least sense. Even in this so-called “superfight” era, White’s plan to try to wedge Cejudo and Moraes into this category is the equivalent of trying to put a square peg in a round hole.

It isn’t a champion-vs.-champion fight, like the contest between Cejudo and Dillashaw, or the fights between Amanda Nunes and Cristiane “Cyborg” Justino or Daniel Cormier and Stipe Miocic. The UFC can’t use that angle to try to sell the fight. Nor is there any history of rivalry or bad blood between Cejudo and Moraes to justify pushing this fight as a personal grudge match.

More than anything else, White’s plan puts another nail in the coffin of the flyweight division. When it seems like every other division gets an interim title at the drop of a hat, it’s not a good sign when the UFC isn’t willing to call the winner of a showdown between Benavidez and Formiga the interim champion for the weight class.

While it’s true the value of an interim title in the UFC changes from case to case depending on what the UFC brass wants it to mean, it isn’t a crazy inference to make that the possibility of Cejudo eventually facing the winner to unify the belts would have a higher probability of happening than Cejudo going back down to flyweight to face the top contender.

The more obvious sign that the end is nearing for the flyweight division is in how quickly the fight was made between Cejudo and Moraes after the announcement that Dillashaw was going to be on the shelf for at least a year. The bantamweight division doesn’t lack worthy contenders, and while Moraes is the obvious choice for one half of the fight, Aljamain Sterling and Pedro Munhoz are both coming off impressive wins and could easily slot in opposite Moraes. Even though Sterling suffered a recent knockout loss to Moraes, both he and Munhoz can make a meritorious claim that they are more deserving of the title shot than the career flyweight Cejudo. In addition, there is always Dominick Cruz, who has not fought since dropping the title to Cody Garbrandt at the end of 2016 but is still considered the greatest bantamweight in UFC history.

By disregarding those three options and jumping on the chance to move Cejudo up a division, the UFC points towards “The Messenger” leaving the flyweight ranks behind for good. His struggle to make the 125-pound championship limit at flyweight is no secret. Even if he comes out of the Moraes fight with a loss, Cejudo could decide he feels healthier without having to cut the extra 10 pounds and easily opt to make a permanent home at bantamweight. He could try to work his way through the division for another chance to become a two-division champion. If Cejudo was to vacate his flyweight title to move up in weight full-time, then the UFC has just the excuse it needs to phase out the division quietly.

If the UFC operated as a pure meritocracy, the next flyweight title shot would be given to one of the two fighters slated to appear in the No. 1 contender’s bout on the same night when Cejudo vies for the bantamweight belt. While Benavidez does have a TKO victory over Formiga, that fight took place five and a half years ago. So, while the victory isn’t meaningless, it shouldn’t be the deciding factor in who gets the next crack at flyweight gold. Benavidez and Formiga have both fought to a split decision with Cejudo, but with differing results. Benavidez won his fight against the current champ when the two rival coaches fought at the finale of the 24th season of The Ultimate Fighter, whereas Formiga dropped a title-eliminator fight to Cejudo, giving Cejudo his first title shot against Demetrious “Mighty Mouse” Johnson. That was the second time Formiga had been one win away from a chance to overtake Mighty Mouse — he came up short in his first attempt when he lost to John Dodson via TKO in his 2012 promotional debut.

Based on the head-to-head results and coming out on top of the pseudo round robin between the three men, combined with his status as a mainstay near the top of the flyweight division since its inception, Benavidez has a strong case for why he has earned a third shot at the UFC flyweight title that has eluded him thus far in his career. Throughout Johnson’s reign as champion, Mighty Mouse proved to be Benavidez’s Achilles Heel. Benavidez lost to Johnson twice, first by split decision and then by first-round knockout in the rematch. For years, though, Benavidez had only been beaten by two fighters: Johnson and Cruz, who beat Benavidez twice at bantamweight in the WEC.

The third and most recent man to get the better of Megan Olivi’s husband is Sergio Pettis. Pettis won the fight by split decision in a contest that marked Benavidez’s return to the cage after knee injuries sidelined him for a year and a half. This loss plays a major factor in why Formiga ultimately is more deserving of taking on Cejudo in the next flyweight title fight. After Pettis defeated Benavidez, the Roufusport product took on Formiga. The Brazilian fighter was able to nullify Pettis’s superior striking by out-grappling the Milwaukee native en route to a unanimous decision. The win over Pettis made it three victories in a row for Formiga, whose performance in Nashville extended the streak to four.

The top contender should be the person with the best chance to defeat the champion at this moment in time, and not the person with the more impressive cumulative resume. Although Benavidez has rebounded nicely after dropping the split decision to Pettis by winning back-to-back fights against Alex Perez and Dustin Ortiz, it doesn’t outweigh Formiga’s current streak. Both fighters can build impressive cases for why they should be the first person in line to dethrone Cejudo, but Formiga has the slightly stronger argument for the title shot.

It is a bigger injustice that a champion will have fought twice since winning the belt without facing the top contender in his own weight class than it would be to give Benavidez a title fight over Formiga. We are now left hoping that White’s plan doesn’t come to fruition and that Cejudo stays at flyweight to defend the belt. Fortunately, White has a history of announcing fights that fizzle for one reason or another. However, with the writing on the wall for the end of the flyweight division, there is a strong possibility that the showdown between Cejudo and Moraes for the unclaimed bantamweight strap ends up being what we see next.