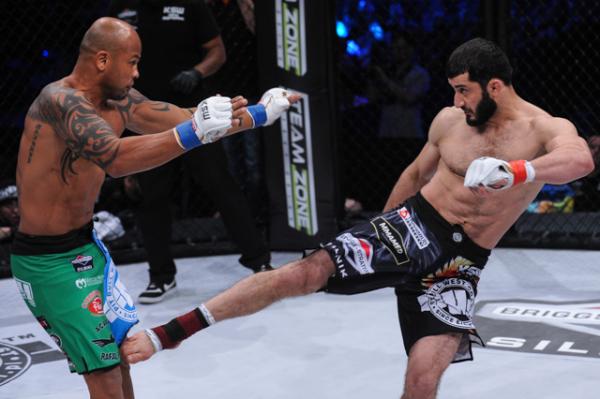 Mamed Khalidov has long been among the top ranked fighters who do not reside within a major North American MMA promotion. Since his last Sengoku fight in 2010, the middleweight has been a mainstay of the Polish KSW organization. However, he’s not the promotion’s 185-pound champion. That honor belongs to Michał Materla. Khalidov has a chance to rectify the situation at the promotion’s 33rd offering. The pair meet in the headlining bout with the title on the line.

Khalidov, a native of Russia who now fights out of Poland, got off to a slow 3-3 start after making his pro debut in 2004. It all started to click for the “Cannibal” in 2005. Over the next four years, he went 17-0-1 while defeating the likes of Tor Troéng, Igor Pokrajac and Jorge Santiago. The win over Santiago in Khalidov’s Sengoku debut led to an immediate rematch with Santiago’s belt on the line, but Khalidov lost the fight via decision. He has rebounded with another strong stretch to compile a 10-0-1 mark over his last 11 fights, but he’s been out of action for nearly a year after undergoing surgery for a spinal injury. The 35-year-old’s martial arts background began with Kyokushin karate in his youth, but he has added a diverse range of disciplines to his arsenal. The former KSW light heavyweight champion is a finisher who has stopped 17 opponents via submission and 11 foes by way of strikes.

Materla is another decade-plus veteran of the sport who has never seen the inside of the UFC’s Octagon despite a stellar resume. The Polish fighter debuted in 2003 and won his first eight fights, securing seven of the wins by stoppage. He stumbled in back-to-back fights against Evangelista Santos and Moise Rimbon on foreign soil before returning to Poland and becoming a KSW mainstay. He took three wins in a single night to win a one-night tournament at KSW 6, and he won his quarterfinal fight of the one-night tournament at KSW 7 before being eliminated by Antonio Mendes in the semifinals via split decision. Materla won his next four fights to earn a shot at the vacant KSW middleweight crown, which he captured with a victory over nemesis Jay Silva. He successfully defended the title against UFC veterans Rodney Wallace and Kendall Grove before losing a non-title bout to Silva. In the trilogy fight, where the belt was on the line, Materla defeated Silva. He has gone on to win two more fights, including a successful title defense against UFC vet Tomasz Drwal. The 31-year-old is a decorated grappler out of the Berserkers Team. He has 12 submission wins and four finishes via strikes.

Any fan of KSW has to be looking forward to this match-up. Materla and Khalidov have spent years dominating almost all of the competition set in front of them. Materla’s losses to mid-level talent like Silva, Santos, Mendes and Rimbon is cause for concern. Khalidov has demonstrated a much higher rate of consistency against these middle-of-the-pack foes and projects as the likely favorite against Materla. That’s not to say that this won’t be a close fight. In fact, it’s likely to turn into a grappling chess match between the champ, who likes to fight from top position, and the challenger, who is too content to fight off his back. Materla will score the takedowns, but Khalidov is going to attack from the bottom with regularity.

This fight could easily end in a draw or a razor-thin split decision, but Materla’s previous stumbles are enough to suggest that he doesn’t have what it takes to edge Khalidov on the feet or the mat. If Khalidov can find the finish, it’s likely to come in much the same manner as it did against Santiago: off of a scramble on the ground. If the Polish-based fighter can’t score the stoppage, he’ll settle for the judges’ nod.

XFC International has only had 11 events since adding the “International” tag to its name and migrating from Florida to Brazil, but the organization has already crowned two female strawweight tournament winners. Now, those two ladies, 2014 tourney winner Vanessa Guimarães and 2015 tourney champ Viviane Pereira meet for the vacant strawweight title at the organization’s 12th show.

Guimarães and Pereira started competing as professionals within months of each other in late 2012, but Pereira has gained more experience and compiled the better record. The 22-year-old Pereira is set to see her most accomplished opponent in this fight. Her record consists primarily of wins over fighters who had between zero and three pro bouts when they faced “Sucuri,” but she has notched wins over previously undefeated fighters Poliana Botelho and Liana Pirosin. The former Bitetti Combat flyweight champion has stopped one opponent via submission and four foes by way of strikes.

When Guimarães entered the XFC International strawweight tournament in 2014, she was 2-2 with losses to Aline Sattelmayer and future UFC fighter Ericka Almeida. “Vanessinha” emerged as the tourney champ by claiming victories over the previously undefeated Marcela Yineris and Vanessa Melo, who was 3-2 when the pair met. The 25-year-old won both fights by split decision and has been out of action since September 2014. The CM System product has finished just one of her opponents.

Pereira can be wild on her feet. She appears to be faster, throws with more volume and packs more power than Guimarães. If the fight hits the ground, Guimarães could be in trouble too. Pereira transitions to mount well and looks for ground-and-pound finishes. In either scenario, Pereira’s power translates to a finish. Meanwhile, Guimarães has struggled to be effective at stopping her opponents. She has had to work to score points with the judges, and even then she has barely squeaked by on several occasions.

This is the next logical step in Pereira’s development. The young prospect gets a chance to take out a tournament winner and capture more gold in an established organization. Guimarães represents only a slight step up in the level of competition Pereira has seen, and she should be able to continue her trend of finishing her opponent with a barrage of fists.

Leave it to a Japanese promotion to use comic books as a theme for a show. The event poster is certainly interesting, and so is the evening’s headliner at the first edition of Shooto: The Comic. The main event pits flyweight — that’s Shooto’s 115-pound division — champion Yoshitaka Naito against challenger Junji Ito.

Naito has been a Shooto mainstay since his pro debut in 2012. The 31-year-old finished his first three opponents and scored decisions in his next four fights to earn a title berth against Shinya Murofushi for Shooto’s flyweight title. “Nobita” battled Murofushi for nearly five full rounds before finishing the champ with a rear-naked choke with just three seconds left in the bout. With the dramatic late finish, Naito captured the title. The Paraestra Matsudo product returned to action 10 months later to make his first title defense against teenage prospect Ryuto Sawada. Naito emerged with an arm-triangle choke submission victory in the fourth round to retain the belt. The undefeated fighter has won four fights by way of submission and scored one knockout finish.

Ito has been fighting professionally since 2007. The 29-year-old trains out of Shooting Gym Yokohama. He is a knockout artist who has finished eight of his opponents with his fists. He also has one submission victory. Ito’s submission defense might be his biggest weakness, though. Two of his submission defeats came in Shooto title challenges, where he fell to Mikihito Yamagami and Shinya Murofushi, and he has suffered three submission losses overall. “Sarumaru” landed his spot opposite Naito by defeating Shooto’s other strawweight stud, the previously undefeated Ken Asuka.

The 5-foot-7 Naito will once again enjoy an edge in height, which could frustrate a striker like Ito. The veteran Ito has struggled in his biggest fights, especially title matches, and it’s likely that he’ll encounter similar problems against Naito, who tends to seek the clinch and takedown. Ito is too weak on the ground to withstand the champ’s grappling game.

Naito has never been a quick finisher. Instead, he’s patient while waiting for openings that have often come late in his contests. The same will be true against Ito. The fight is likely to head into the championship rounds, where Naito will once again coax a tapout from his opponent.