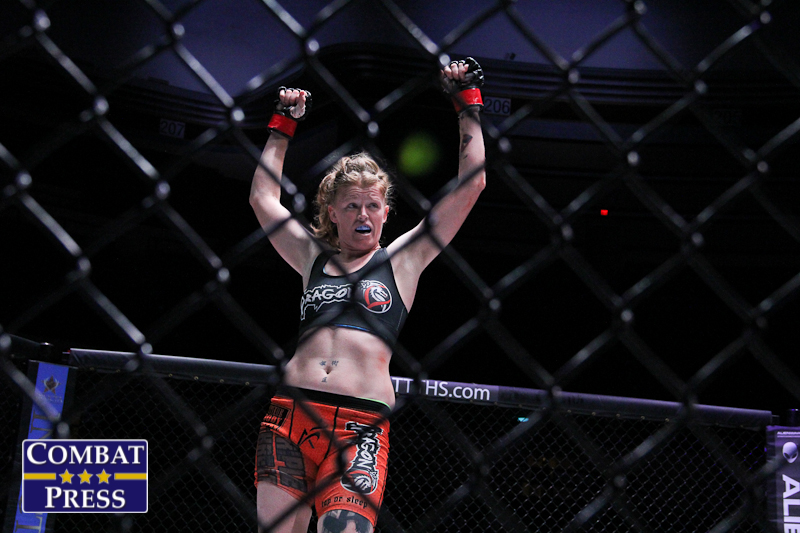 Tonya Evinger was crushed when Holly Holm knocked out Ronda Rousey to dethrone the biggest figure in women’s combat sports.

“I thought it was going to be me. Damn you, Holly Holm,” Evinger told Jason Kelly and Joe Rizzo on Rear Naked Choke Radio when speaking about the newly crowned UFC women’s bantamweight champion.

Evinger was once in Holm’s shoes. She had the chance to take down Gina “Crush” Carano from the podium of budding superstardom. The same kind of superstardom that took Rousey from UFC champion to Hollywood’s doorstep.

Evinger has blossomed in her early 30s, becoming the champion of the 135-pound division of Invicta FC. Holding that belt makes Evinger an instant contender in the UFC. When her shot came at the pre-Rousey face of women’s MMA, Evinger infamously quipped that she wanted to kiss Carano, but instead she’d just have to knock her out.

It didn’t quite work out that way. At least not all of it. Evinger lost via rear-naked choke to Carano, but she eventually got that kiss.

“We did go out many, many times,” Evinger said. “I took her to a gay bar in Hawaii and they had 25-cent beers, so we got in a contest like we’re going to outdrink each other and see who can drink the most. We got fucked up, I mean, real fucked up. It was bad. There were maybe five people and then all of us showed up. We were just rocking out all over dance floor. I had her up against the fucking railing. Man, we had fun.

“I got so drunk I passed out — this is when we fought on Elite XC — and our hotel was a block from where we’re partying and I couldn’t walk back to the hotel, so they had to get a cab for us. She had a picture on MySpace. It’s of me in a cab and I’m sitting straight up, but my head is down and I’m just drooling all over my tits and Gina was on the other side of me smiling. I was like, man, what did I do to myself? I passed out and drooled on myself instead of trying to get into her panties. What is wrong with me?

“We hung out a bunch more times, in Stockton and Vegas and stuff like that. In Vegas, I made her hold my hand the whole time we walked around. I did get a kiss out of her that night, but it was kind of tricky. I was kind of being a creep, but she liked it, so whatever.”

Since then, the openly gay Evinger has figured out the kinks that were keeping her from moving to the elite level. She has gotten better with age, finishing her last four opponents — a pair each by knockout and submission. In addition to her latest achievements, she is also on an eight-fight winning streak.

That type of roll, plus her belt, gave Evinger dreams of being the one to extinguish the blazing run of Rousey.

“It didn’t matter who was going to take her out, it was going to happen by a TKO,” Evinger said. “I planned on taking her down and getting a TKO on the ground, because that’s the type of fighter I am. I think that’s a fight that showed her experience, and that’s the game plan I had in mind when I was hoping to get a fight with her.

“I think it just came down to experience, and when shit went wrong and she started getting hit and didn’t back up and have a game plan, she didn’t start doing what she needed to do to win the fight. She tried to chase [Holm] down, and I don’t know who she was trying to prove anything to, but I’m never in a fight to get hit. I’m in there to hit you and not get hit at all, if possible. I’m there to beat somebody up, not get beat up. So I think when you throw someone in there like that… And what kind of coach tells someone to play someone else’s game? I don’t care if you are better than them at their own game. Why even risk that? Why not just go in and get the win and beat the shit out of somebody? I just don’t understand it.”

Holm’s background as an all-time boxing great was one of the best-kept non-secrets in MMA corners up until 59 seconds of the second round of her bout with Rousey. In retrospect, it seems easy to think Holm would have been “the one” to end Rousey’s run.

Evinger has a similar pedigree, but not in the sweet science. She was a wrestler at the first collegiate American college to offer scholarships for women to wrestle. She was on the USA National Team as a junior in high school, and was a member of what she termed one of the best high school wrestling teams in the sport-rich state of Missouri.

In college, she wrestled alongside Clarissa Chun, who went on to become a world champion and a two-time Olympian that earned a bronze medal.

Evinger’s lengthy resume in combat sports is standard among MMA’s finest competitors. She fully understands why a specific strategy is utilized for a fighter to defeat their foe, but to place all the blame on Rousey’s game plan is not something she completely agrees with.

Never being on the losing end and being forced to switch it up on the fly, which is something Rousey has never experienced, is where Evinger places the blame on the Olympic judo medalist’s mishap.

“As soon as the fight starts, I change my mind right there. My coach is always like, ‘You never do what our game plan is.’ But I feel like I’m that fighter in there, if shit is going bad and going the wrong way, I’m that fighter that sees that and changes that.”

One of the many differences between Evinger and Rousey is her in-cage experience. Whether the hammer or the nail, it made Evinger a better fighter due to the fact that she had to make adjustments when put in an uncomfortable position during a bout.

As Evinger watched Rousey get punished from the time the bell rang until her body hit the canvas, she couldn’t help but put on her analytical hat, process what was happening and think about what she would do if she was in a similar scenario.

“To me, she looked really stiff and her knees were snapping straight,” Evinger said. “It just looked to me like as soon as she starting getting hit… I don’t know if she’s not used to it or just not sparring hard, I don’t what the issue is, maybe she didn’t get the training in she needed to, but it doesn’t matter… I would’ve used that whole cage to run and get my composure back and then figure it the fuck out.

“[Rousey] did a great job of getting people to rush in and grapple with her, and that’s where she’s strong because she’s not getting hit. I mean, obviously the game plan for me, knowing she has good grappling and good jiu-jitsu, why would I try to go to the ground? Why wouldn’t I keep my distance and try to pick her apart? The only place I absolutely have more experience, because I’ve been doing it for so many more years, so why not box? She ain’t going to box me; she ain’t a boxer. Why wouldn’t I box her, you know? To play that game against Holly, that’s not good, man.”

On the flipside, Evinger thinks Holm’s downfall will be someone with great takedowns and even better ground control. That’s not to say Holm hasn’t competed against anyone that doesn’t have above-average abilities in those departments, but there are a handful sitting at the top of the division that Evinger views as a tough scrap for the champ. They just have to be wise about it.

“I think Miesha Tate could take Holly Holm down. I think I could take Holly Holm down. I think there’s a lot of girls that can,” Evinger said. “Her fight with [Marion Reneau] — that girl has great jiu-jitsu, but even she tried to stand and bang with Holly. Like, why? By the time she realized she wanted to take Holly down, she already had the shit kicked out of her legs, her shots were desperate and she can’t get inside. Why get that beat up that you can’t execute your game?”

It’s most likely, but not cemented, that Holm and Rousey will have an immediate rematch. There are a small handful of combatants in line, but with that analysis, experience, those accolades and her current position in the women’s bantamweight class, Evinger could easily go from being crushed to crushing the division.