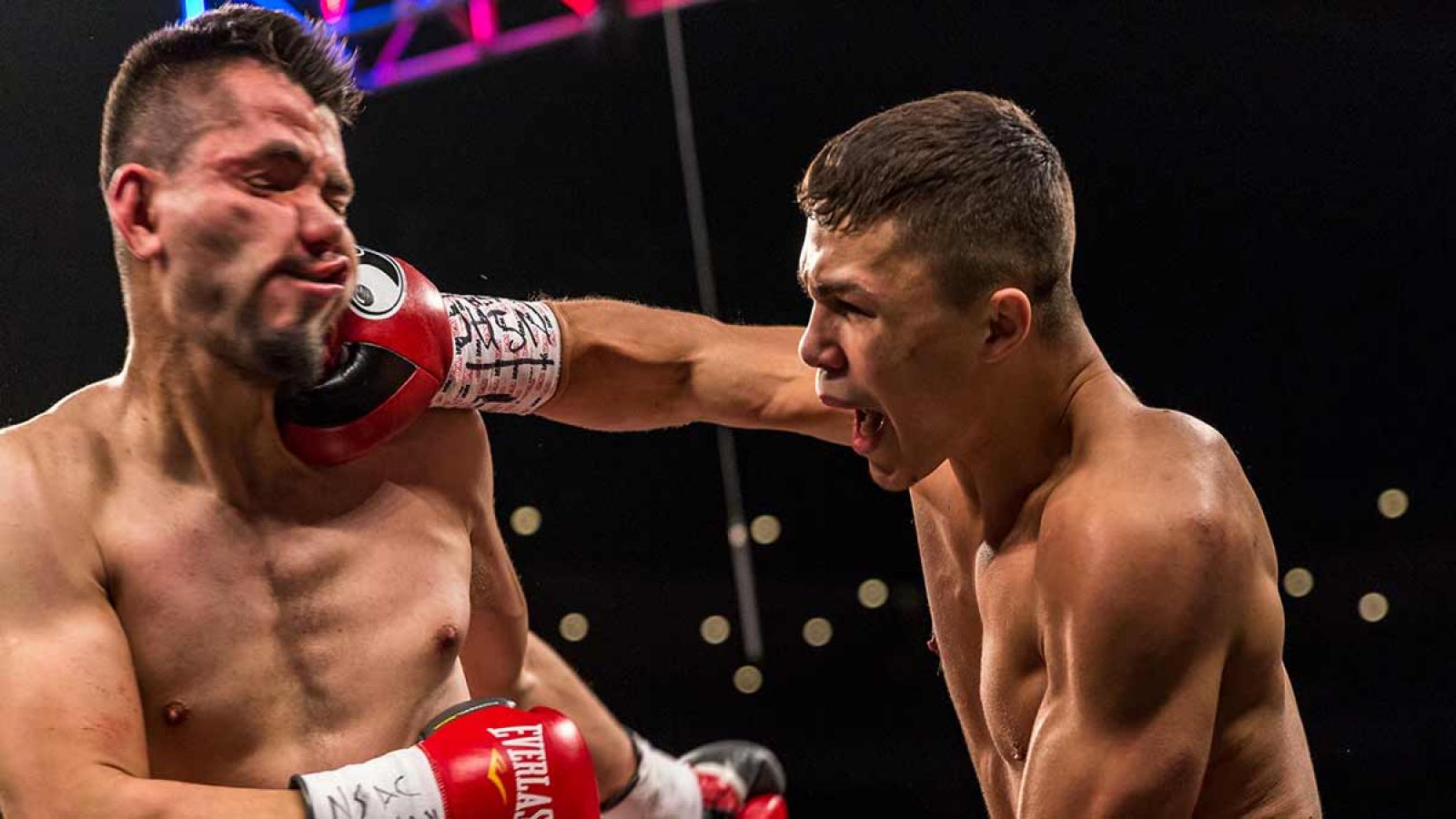 Joey Spencer: ‘I Always Wanted to be a Fighter’

Anybody who watched Joey Spencer in his amateur days isn’t surprised by the early noise he’s making in the industry. Those who have known Spencer since his days as a little kid aren’t surprised, either. His skill set and must-see TV style are a direct result of over a decade of determination. On Sunday, Spencer returns to the ring and intends to put on a show. If all goes according to plan, he’ll show how his obsession with the sport can become a problem for anyone standing across the ring. There’s a reason PBC named him its prospect of the year.

“Everybody who knows me knows when I was a young kid I was on a one-way street,” Spencer told Combat Press. “That was all I talked about — becoming a professional fighter and becoming a world champion. It was set in my mind from the beginning. I’m not kidding you, from the time I was about 8 years old. I was already saying I was gonna be pound-for-pound one day. It was all I wanted to do, just study these guys and watch these guys all day, every day. I know when I was in school I had my phone up on YouTube as I got older, just studying fighters. There was never a time I wanted to do something different. I always wanted to be a fighter.”

You hear boxers say this a lot. Well, Spencer backed up his words with actions. At 7 years old, I was worried about beating Sonic the Hedgehog on my Sega Genesis and making sure I didn’t miss Saturday-morning cartoons. As for Spencer? It was making sure he didn’t miss a fight when given the opportunity.

“Everybody was boxing fans,” said Spencer. “My dad was an amateur boxer. All my uncles and grandpa were boxers. So when we would go to Christmas parties or whatever parties as a family, whenever there was a fight on TV, whether it was an old fight or a live one, they watched. I was 7 years old, and all the kids would be in the toy room playing and running around, but I’d be the one sitting right next to my dad with all the adults watching the fight and talking about the fight. I was not going to miss a fight.”

This love of the sport led to a successful amateur career that included several championships for Spencer. He won the Ringside National Championship, the Junior Olympics National Championship, Junior Golden Glove, Silver Gloves, and the U.S. Junior Youth. He won many of these accolades more than once. A lot of amateur boxers with the success Spencer found have dreams of competing in the Olympics. However, with the 2020 Olympics still a few years away at that time, the urge to go pro kicked in. It also didn’t hurt that he was being highly coveted by the biggest promoters and promotions in boxing.

“It was up in the air when I was about 16 years old whether I would try to go for the Olympics,” explained Spencer. “But then I just started getting all these offers from promoters. I started negotiating with the biggest promoters — Top Rank, Ringstar, everybody — and then Al Haymon offered me a great, great deal and it was hard to turn down. He gave me the opportunity to become a star, and I couldn’t turn it down.”

Haymon and PBC have taken a deliberate approach of building up Spencer and not having him jump into high waters. It’s the approach the majority of promoters stick to when dealing with a boxer making their pro debut, let alone a prospect with the boxing prowess of Spencer. Spencer understands the benefits this process can have for his career.

“As an amateur, I was at the highest, most elite level, so every fight was against fighters like that,” he said. “There’s a lot to learn about being a pro other than just the fight on the night. That’s why the measured approach is important. Just getting everything that you need to do outside the ring, in the gym, leading up [to] the fight — the training camp, diets, sleep. Everything you need to to get right — even just the nerves of getting in and fighting as an 18-year-old on television. The pressure in that and getting used to that pressure and using those nerves and that pressure to your advantage. You learn [with] every fight, more and more. When that time comes to step up, I’ll be ready.”

It just so happens that Spencer will share a card with Caleb Plant, who takes part in the featured bout of the evening against Jose Uzcategui. The two men don’t just share a card, though. They share a bond.

“It happened pretty naturally, pretty organically,” said Spencer. “I fought my second fight in Minneapolis. [Plant] had a buddy of his on the undercard, so he was there. And I got a knockout on that card. And he was in the dressing room, and I told him I was a big fan, because I watched a lot of his fights and studied a lot of his fights. And ever since, not necessarily on purpose, he’s just been at all of my fights, one way or another. So we’d been able to just kind of bond [and] just kinda kick it.”

Spencer not only studied Plant in the ring, but also in how Plant holds himself out of it. That sort of mentorship that a veteran boxer can provide to a young one like Spencer can pay dividends, be it now or in the future.

“When I’m that age, when I’m at that level, I’m definitely always going to remember how people like him treated me when I was just starting out in the game and how that played a role in my career. Because, there have been more guys like him, like Andre Ward, who have given me support, and I’m going to do the same to people who are coming into the game when I’m about to win a title or when I’m about to retire. It does mean a lot to young fighters.”

Maybe there’s even a 7-year-old kid out there somewhere, sitting next to his dad and watching Spencer fight. Maybe that kid believes he’ll be the next pound-for-pound great. Maybe Spencer will even be there when that aspiring boxer climbs his own way into the pro ranks. It would certainly be a poetic way for Spencer to come full circle in a sport that really has become life.