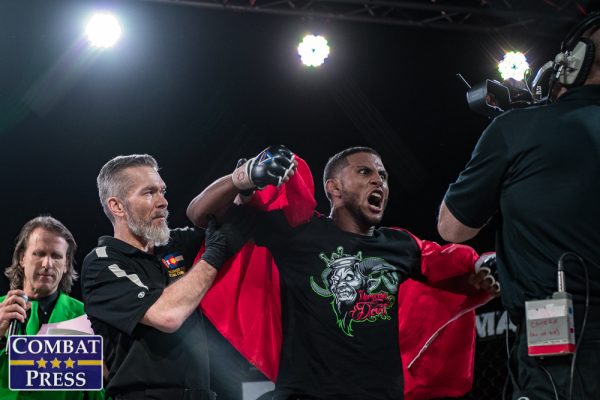 What did your parents want you to do with your life?

Not everyone can answer this question. Some people didn’t know their parents. Others may not have had that line of communication open. Some parents simply don’t care. However, there are people out there whose parents have a specific path they would like their kids to follow.

Youssef Zalal grew up in Morocco, where his mom got him into kickboxing at age 11. She wanted to keep him in school and out of trouble. His dad moved him to Colorado at age 13. He has been an MMA fighter since he was 18. However, his father had a different path in mind.

“My dad wanted me to be a software engineer, but that’s not my thing, to be honest,” Zalal told Combat Press. “When I hit age 20, 21, that’s when my eyes really started to open up, and I realized that I really can do anything I want. I’m doing this for my family in Morocco. I’m doing this for my mom and my sister. I haven’t seen them in 10 years.”

Zalal is now 22 years old. He is a very successful athlete with a bright future. His pro record is perfect through five fights. He trains out of Factory X Muay Thai in Englewood, Colo. After his last win at Legacy Fighting Alliance 39 in May, he appeared to be on the fast track to the UFC. However, his run hit a hiccup when he was pulled from a bout on Dana White’s Tuesday Night Contender Series in mid-June.

His last win over Daniel Soto kept Zalal undefeated as a pro, but he wasn’t entirely happy with his performance — a second-round submission win. That was his fourth submission in five fights, but that’s not what a guy with a history in kickboxing expects.

“I learn from every fight,” Zalal admitted. “Even though I won and I finished, I was happy with my performance, but not great. You’re never 100 percent satisfied, you know? I didn’t do enough striking, to be honest. My coach said I was doing good, but in my head, I thought that not enough people have seen my striking.”

While a win is a win, the victories Zalal has so far are just the beginning for the featherweight prospect. His motivation is not just about getting a “W.” It’s not just about representing Morocco, either. It’s not even about being able to give back to his biggest supporters, including his wife Kat.

“I always want more,” said Zalal. “I’ll be satisfied when I’m retired and have a world title and all of that, but right now, I’m just getting started. A win is like, OK, whatever. It’s not like a world champion, you know? It builds up to a world champion, but it’s nothing as of now. That’s what I think about after every fight, and that’s why I try to perform better every single fight.

“The motivation for me is all upstairs. I’m really competitive, man, and I want to get my dreams as early as possible. That’s all I feel about it. That’s what pushes me every day to wake up and do this, do that.”

After seven months on the bench — not by choice, but by chance — Zalal returns to the cage on Friday night for a bout that will air live on AXS TV. He performs on the main card of LFA 56. He was originally set to face Josh Marsh, who fights out of Roufusport in Milwaukee. However, two days out, Marsh had to pull out and was replaced by Steven Merrill.

Merrill is an LFA veteran who has had a rough run as of late. He is 1-3-1 in his last five fights, after opening his pro career with four submission victories in a row. Merrill has a four-inch reach advantage, and he will also be fighting closer to home, so he will likely have the fans on his side as well.

“The good thing is that I experience that stuff traveling with my teammates,” Zalal said. “So, for me, it’s just another day. I’m focused on one mission for me. I don’t care who’s booing [or] who’s yelling. I really don’t care.”

Zalal is one of the coaches at Factory X. He practically lives in the gym. He’s also been married now for nine months, and married life really helps round out his work-life balance.

“It’s good, man,” Zalal said. “It takes a lot of stress out of my personal life. I’ll do anything for that girl. She changed my life.”

For only 22 years of age, Zalal has had a lot of life-changing experiences. The move from Morocco was obviously a big one, and one of his motivations is to represent his home country on the biggest platform in the sport.

“That’s my goal,” said “The Moroccan Devil,” as he is known professionally. “It’s me making this sport big in Morocco. We have two Moroccans in the UFC, and that’s all we have.”

Zalal may not have followed the software-engineering path that his father had hoped for, but his dad goes to his fights and cheers on his son. Meanwhile, Zalal’s mom and sister in Morocco will be up at 3 a.m. local time watching him follow his dream to be in the UFC.

Zalal would like to thank all of his coaches and training partners at Factory X, as well as all of his family, friends, fans and sponsors. Follow Youssef on Twitter: @moroccan_devil
Advertisement