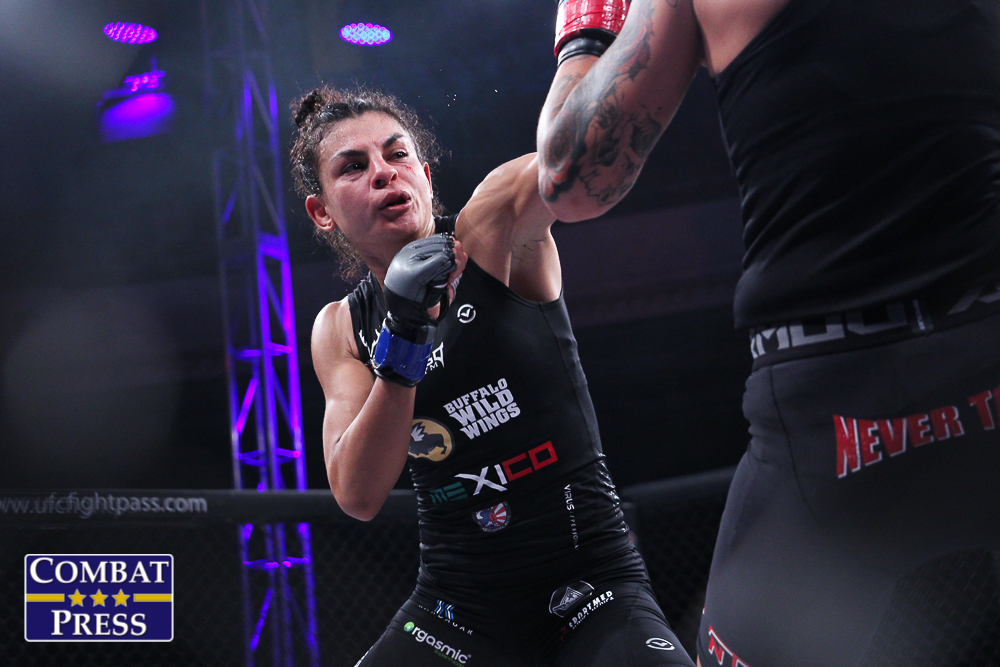 Let’s examine the women’s flyweight division, a weight class that was just added to the UFC. It’s been recently inhabited by fighters leaving the strawweight and bantamweight divisions, but it could easily add even more depth by including existing flyweights from outside of the promotion.

It’s not often that a top-level MMA fighter emerges from the country of Argentina, even if it is a place that loves the sport. However, Juarez is one of the few prospects that flashes real potential to come out of the country. She’s long been a top-25 flyweight.

The 5-foot-3 Juarez may be a tad small for the flyweight division, but she makes up for it in ferocity and grit. She’s a finisher who can get it done with the power in her hands or with her submission game. She takes on solid regional competition, so she’s not constantly picking up easy wins.

Juarez’s only career loss came courtesy of UFC veteran Poliana Botelho in 2015. After a hiatus, she came back for one fight in 2017 and needed just one round to finish off Maria Vega with a striking stoppage.

Juarez needs to get more active to get the UFC’s attention, but she certainly has the skills and toughness to hang.

A nickname like “The Violence Queen” infers to fans that if they tune into a fight, they are going to see destruction. When it comes to Lipski’s fights, that is almost a guarantee.

The 23-year-old Brazilian is a Muay Thai stylist with immense penchant for doing bodily damage. She does it with all eight points of her body — her hands, elbows, legs and knees. She scores knockouts regularly, but she’s actually scored her last two wins by way of first-round submission.

Lipski is the KSW flyweight champion, a feat she achieved in 2017 by armbarring Diana Belbiţă at the end of the first round. She ended her year by scoring a sub-minute choke-out of Mariana Morais to retain her KSW crown while continuing to show she’s worth the price of admission.

Entertainment value is always something UFC President Dana White values when recruiting fighters, and Lipski will give the fans blood. If the UFC can get her away from KSW, she would certainly be a dangerous addition to the UFC’s roster.

From fighting in the obscure regionals in Colombia to bringing her violent brand of MMA to the Legacy Fighting Alliance, Mazo has quickly established herself as one of the most entertaining and violent fighters in all of women’s MMA.

Mazo is a true blue-chipper at just 20 years of age, which makes her accomplishments in the sport all the more impressive. The Muay Thai specialist fights exactly as you’d expect, with powerful, beautiful technique that is devastating when it lands. Her ground game is a tad more of a question mark, but she will gain fans and wins when she lands her massive strikes.

Mazo made landfall in America in 2017 with two devastating knockout wins that immediately shot her up into top-prospect talks. First, she destroyed Jamie Thorton with a highlight-reel head kick that got everyone’s attention. She did the same against Linsey Williams to prove that the Thorton throttling was not a fluke.

These two finishes, in combination with her status in the LFA, have put Mazo on the UFC’s radar, undoubtedly. Don’t be shocked to see her signed within the first half of 2018. Her high-octane style and violent finishes make her one of the most exciting prospects in women’s MMA.

While the United Kingdom has provided a lot of male MMA talent to the scene, there have not been a ton of women to come out of the country as prospects. McCann is out to change this trend. She has emerged as a solid prospect who is improving from fight to fight.

McCann is a strong, powerful fighter with a low center of gravity. She has powerful punches, while her kicks are a little more deliberate and less effective. She’s best when she closes the distance and fights snug, working from the clinch and achieving takedowns.

McCann scored her two biggest wins to date in 2017. The first came over Invicta veteran Lacey Schuckman. Then she took out Brazilian veteran Priscila de Souza. Both fights were big steps up in competition for the Liverpool native.

The UFC will be in England in the first quarter of the year, so if the company wants to add a local female that the fans will get behind, McCann should be on the short list. Her five-fight winning streak has her momentum high and her hype building.

It appears as if Mexico is catching up after being behind in the MMA scene. One of the many fighters emerging from Mexico to become a contender at a high level is Rodriguez, an Invicta fighter who has proven capable of hanging with some of the best Invicta’s flyweight division has to offer.

Rodriguez is a very impressive striker who has good size at 5-foot-7. She trains with the Lobo Gym, one of the best camps in Mexico. It’s with this camp that she’s acquired her killer instinct to go with her powerful, precise striking. A majority of her wins have come by way of striking stoppage.

Rodriguez’s only two career losses came to UFC fighters Poliana Botelho and Alexa Grasso. Her last loss was in 2014. Since then, she has won three straight. In 2017, Rodriguez emerged on the American scene with Invicta, where she knocked out Brazilian Barbara Acioly and scored an entertaining decision over Christine Ferea.

The UFC loves snagging Mexican talent, especially as the organization looks to break into that region’s market of combat sports fans. Rodriguez is a person fans can get behind.