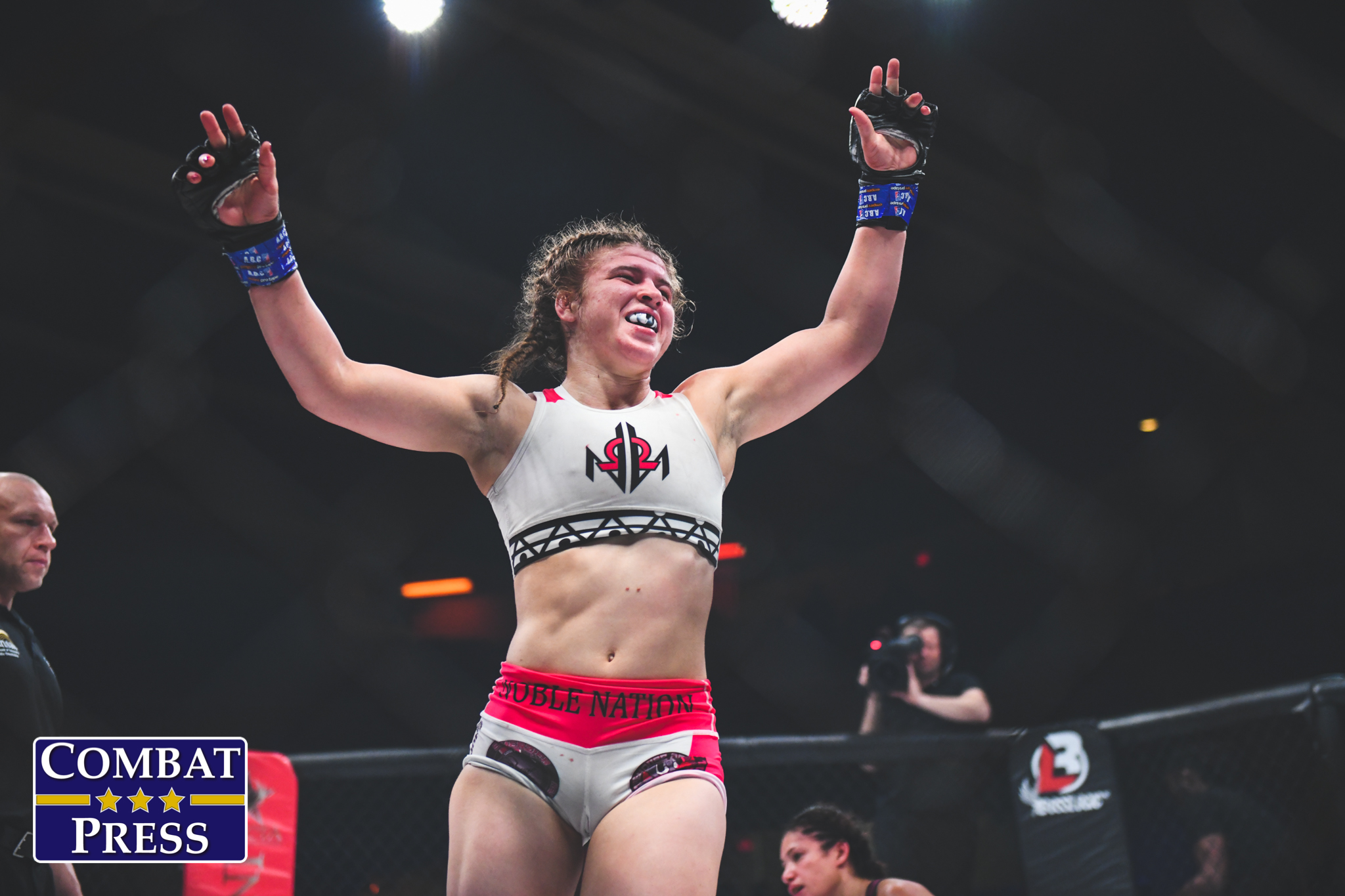 Well, I had planned to give you three fights in the preview this week, as usual. However, also as usual, we lost one of the fights.

The scheduled UFC 260 bout between Jessica Penne and Hannah Goldy was cancelled due to a positive COVID-19 test for Goldy. That fight has been quickly rescheduled for April, so we will still get to see it.

This leaves us two contests to talk about. Miranda Maverick faces Gillian Robertson — another fight that was previously scrapped and then rescheduled — at UFC 260, while Vanessa Demopoulos meets Cynthia Arceo at Legacy Fighting Alliance 103. Let’s take a closer look at these fights.

Each event seems to have one fight that is fairly easy to break down. This is not for bad reasons by any means, but just because the path to victory is really pretty easy to explain. This week, this is that fight.

Robertson comes in with a 9-5 record after a decision loss in December to Taila Santos. Meanwhile, Maverick is now 8-2 after winning her UFC debut in October when a cut led to a doctor’s stoppage of her fight against Liana Jojua.

It’s not often that Maverick is not the better grappler in a fight, but that is the case here. Robertson can hang with anyone on the ground, as evidenced by her six submission wins. She should have no interest in long striking exchanges with Maverick. Quite simply, she will be looking to get this to the ground as soon as she can.

Maverick is very good on the ground, especially on top, but this is Robertson’s world. In December, Robertson even submitted Pearl Gonzalez at a Submission Underground show. Her best chance to get Maverick to the mat is to be a little sneaky. She could throw a two- or three-punch combo and immediately drop down with a double-leg or trip takedown. Clinches might be tough, because Maverick is strong and can put Robertson’s back to the cage.

Robertson might also be willing to pull guard, because she has great submissions off her back and can also then look for a sweep to get on top. She can very quickly grab a submission before you even realize it, so she won’t be worried if she ends up there. This means that a guard pull is a real possibility here. I would not even be surprised if we see something crazy, like a rolling kneebar.

If the takedowns aren’t there, at least initially, Robertson can’t become a stationary target for Maverick. She has to get in and get out. She shouldn’t get caught in long exchanges. She also can’t be afraid to throw kicks. Worst case, they get checked. I don’t suspect we would see Maverick try to catch them, because Maverick likely won’t want to go to the ground. Above all, Robertson has to keep her hands up. Maverick can throw really nice flurries and things like elbows, so Robertson has to avoid getting caught by those.

Maverick has supreme confidence. When she’s expected to not do well somewhere in a fight, she is the type to take the fight there just to prove people wrong. Maverick is outstanding on the ground, and I wouldn’t put it past her to want to go there just to prove a point. However, I don’t want to see her do that. She has to win fights now. She can prove points later.

If Maverick keeps it on the feet, then she should be able to take a decision or perhaps even score a finish. She also should be able to bully Robertson. So, while normally you don’t want to clinch with a great grappler, she will be fine to do so here. She has to be the same aggressive Miranda Maverick that we are used to: come forward, throw flurries, mix them between body and head, and force that clinch up against the cage.

Robertson will do one of two things in that clinch. She will either search for a way to get the takedown or just become very defensive. With her back to the cage, the takedown will be very hard to get. This will allow Maverick to tee off. Elbows will be open to her, and if Robertson is just being defensive, Maverick can respond accordingly. Wherever there is an opening, that should be her target.

If the fight goes to the ground, there’s no need for Maverick to panic. She is capable of fighting off any submission attempts. She just has to be wary above all else. If Maverick is on top, she can throw strikes, but she has to keep her arms off the mat and not expose herself to an armbar. She has to avoid exposing herself to a triangle, too. If Maverick ends up on bottom, she must be defensive and look to hold Robertson tight to negate any potential offense from Robertson.

Demopoulos sits at 5-3, but she’s on a two-fight skid. She most recently dropped an October decision to Lupita Godinez in one of the best fights of 2020. Arceo is 5-2-1 after dropping her last fight by decision to Mallory Martin in late 2019.

Make no mistake, Demopoulos needs to get this fight to the ground. She has some of the sneakiest submissions in the sport. She is able to fight very well on top or off her back, and those submissions can come from either position.

The problem with Demopoulos is that she seems to enjoy a good slugfest, even when she is coming up on the short end. This is not a fight where she wants to exchange on the feet. She gives up five and half inches in reach to Arceo, and Arceo’s karate-based stance — think Stephen Thompson — will put her head even farther away from Demopoulos.

Arceo does sometimes reach with punches and leave her head exposed when she strikes low. If Demopoulos decides to engage on the feet for any length of time, then she will want to stay on the outside and wait for Arceo to reach. At that point, Demopoulos can look to throw counters to the head. Demopoulos does have some power, so a well-placed counter hook could perhaps do some damage.

Arceo’s stance also leaves her lead leg out there, so leg kicks from Demopoulos could be another nice weapon. She can throw them pretty much free of risk, because I see no reason to worry about Arceo trying to time them and get her own takedown.

Eventually, though, Demopoulos will look to get this to the ground. She can be tricky with her takedowns in addition to her submissions. Her attempts in this one will be of the shooting-in variety. She might even try for a single leg on that exposed lead leg of Arceo. If necessary, though, she will even pull guard. Here’s an off-the-wall prediction, too: I will not at all be surprised to see a flying armbar out of her in this fight.

Once it’s on the ground, Arceo has good wrist control to stop strikes. Demopoulos is always thinking about submissions. Arceo does not always pay attention to passes, so Demopoulos could really use her hands as a decoy and let Arceo worry about them. As Arceo tries to control those hands, Demopoulos can advance into dominant positions. From there, she is golden.

Arceo, meanwhile, wants this contest to stay on the feet. She has outstanding movement and footwork. If she can draw Demopoulos into a kickboxing match, then she can really have a good night. She has a big reach advantage, so she can land from distance, incorporate her kicks, and stay pretty safe.

Arceo’s kicks come from a variety of angles. She mixes them up well and can land them quickly, which makes timing, checking and blocking them hard. If I was her, I would look to keep the fight in the center where she can better utilize her movement. That movement will make it harder for Demopoulos to shoot in on her.

Patience will be key for Arceo as well. If she comes out guns blazing, then it might make Demopoulos feel an urgency to get it down. If she instead peppers Demopoulos with shots, then she can wait for the big opening to come. And, as you often hear me say, she can’t throw any naked kicks — she has to set them up. If they come at the end of a combo, it makes it harder for Demopoulos to shoot in or catch one of them.

Finally, Arceo can’t get reckless if she hurts Demopoulos. She will obviously want to up the aggression, but she has to do so carefully. We have seen that Demopoulos can take a beating and still pull a finish out of nowhere.

This fight will probably hit the ground at some point. Arceo just wants to be safe there. Her wrist control is important. She should use it not so much to stop strikes but to prevent Demopoulos from grabbing anything — an arm, the neck, whatever.

In addition to controlling the wrist, Arceo should be attentive and not let Demopoulos pass easily. If she can get full guard, that is great. If not, then she should at least get the lockdown on one leg. Demopoulos can be dangerous even from half guard, but there isn’t a ton she can do if Arceo can lock down one leg.