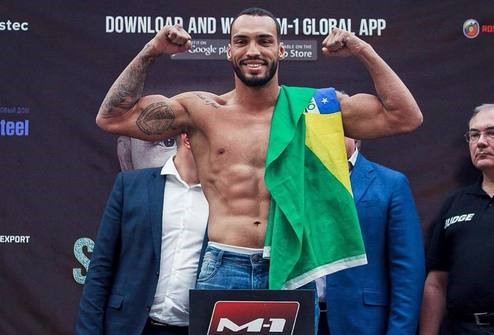 Duraev makes his second consecutive appearance in this series. He continues to be one of the best middleweights not under the UFC’s control. The Absolute Championship Berkut titleholder is a killer in the ring. Duraev could definitely put his talents on display at the highest level.

Duraev is a well-rounded fighter, possessing big-time power and a strong submission game. He only competed once in 2018, but he bested Polish prospect Piotr Strus for a high-profile win. Hopefully he gets busier in 2019.

Duraev is likely under contract right now, but he needs to fight his way through it to make himself available to the UFC. His exciting style and killer instinct would make him a crowd-pleasing addition to the company’s roster.

It’s hard to come by undefeated middleweight prospects, especially ones with over a dozen wins. Russia’s Shamil Gamzatov is one of these rare finds. He has a lot of experience, especially against notable fighters, and is still just 28 years old.

Gamzatov was considered a top contender to take home the Professional Fight League prize of $1 million when the season started. Initially, things went well for him. He scored decision wins over Eddie Gordon and Rex Harris. However, an injury during the playoffs derailed his hopes and took Gamzatov out of the tournament.

The Russia Top Team prospect is a long middleweight known for his wrestling and finishing prowess. Most of his finishes have come on the mat by submission or ground-and-pound. The middleweight division in the UFC has gotten very competitive in recent times, and it’s hard to think Gamzatov wouldn’t make it even more competitive. A PFL tournament title would have made him a lock to get a look from the UFC, but now he has to work a little bit more to get the company to bite. Given his skill set, though, it may not take too long.

Russia is home to some of the best MMA prospects in the world. The country could arguably have taken Brazil out of the second hottest spot for prospects in the world behind the United States. Roman Kopylov, the Fight Nights Global middleweight champion, is a part of the reason for Russia’s rise.

The 6-foot-2 specimen is a world-champion combat-sambo specialist who fights like an absolute savage every time he steps out there. The 27-year-old is an absolute juggernaut when it comes to striking. He possesses one-punch knockout power and a great variety of technique. Though we don’t see it as much, his wrestling and submission wrestling are strong, too. He can take down opponents with ease and keep them there. Kopylov has great cardio, but he has never gone to the scorecards. In 2018, he scored wins over respected prospect Abus Alikhanov and Russian regional veteran Yasubey Enomoto.

Kopylov is primed and ready to go. The Fight Nights organization has often pipelined prospects to the UFC, which makes this an even more obvious pick-up. Kopylov could enter the UFC and be an immediate threat to most in the division.

There are a lot of really good American middleweight prospects right now, but they have to prove themselves against better competition and take more fights. However, there is one American middleweight who, although just 5-0, has the skills and proven dominance to be a great 185er in the near future. His name is Punahele Soriano.

The native Hawaiian and Xtreme Couture representative has only been a pro since 2017, but he’s quickly asserted himself as a top prospect. The 26-year-old has never left the first round in any of his fights, with the longest bout taking just over two and a half minutes. Soriano can throw hands, but he can also score the takedown and submission. In 2018, he went 3-0, and all of his fights took place in large regional promotions Titan FC, V3 Fights and the Legacy Fighting Alliance.

Thanks to Max Holloway and Ilima-Lei Macfarlane, the Hawaiian presence in MMA is starting to take over in the same way Ireland took over with the rise of Conor McGregor. Soriano represents another potential star from the warrior island. The UFC needs to continue developing fighters from Hawaii, and Soriano is the place to start.

The current M-1 Challenge middleweight champion at just 29 years old, “Blindado” Silva has quickly ascended to top middleweight prospect status in 2018. He is helping rep the Evolução Thai MMA team, which has quickly established itself as a top camp in Silva’s native Brazil.

Silva is a blistering striker. He has one-shot knockout power and great technique, which makes him even more dangerous on the feet. His ground game needs a little work, but it has definitely improved. All but one of his losses have come by submission — the other was a disqualification — so he needs to avoid getting taken to the mat. Fortunately, his takedown defense appears to have improved. He was 3-0 in 2018, including knockouts of Russian MMA legend Alexander Shlemenko and last year’s list honoree Artem Frolov.

M-1 Challenge has shown that it has no problem letting talent go to the UFC, so you best believe the UFC has eyes on Silva. If the organization can net him a better payday than M-1, it could further bolster the middleweight division. This is definitely a guy the UFC needs on its roster. There are plenty of great match-ups for Silva inside the Octagon.