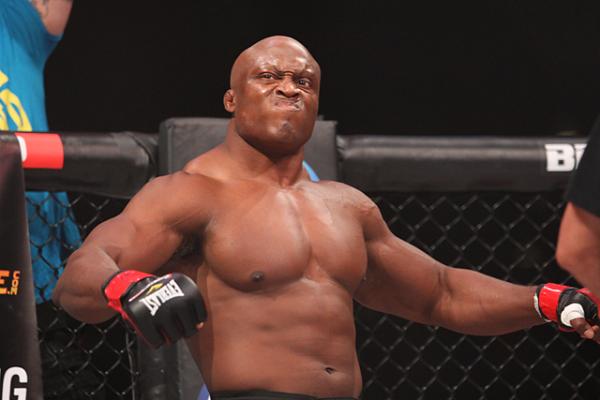 Bobby Lashley’s MMA Career: Too Little, Too Late For the Heavyweight

When you think of pro-wrestlers-turned-MMA-stars or vice versa, two names immediately spring to mind—Brock Lesnar and Ken Shamrock. In Lesnar’s case, the former NCAA wrestling champion abandoned an already legendary WWE career in his prime in order to attempt to make waves in the mixed martial arts world, and he ended up finishing his short MMA career as a former UFC champion and arguably the most popular star in the history of the sport. Shamrock went the other route, using his UFC stardom to land a WWF roster spot in the late ’90s. While he didn’t have the same success or popularity as Lesnar did during his pro wrestling run a few years later, Shamrock successfully introduced the world of MMA to thousands of WWF fans during his stint with the company, something that had to have helped draw in a few viewers when the UFC used WWE programming to lead into the inaugural season of The Ultimate Fighter a few years later.

While both men had varying degrees of success in both sports, the one thing that neither man was able to do was sustain a career while participating in both sports simultaneously. Former Impact pro wrestling champion and Bellator MMA heavyweight Bobby Lashley is looking to do just that. While early on in Lashley’s MMA career the thought of the former ECW champion pulling off such a feat would have been laughable, a renewed focus and a winning streak have suddenly turned Lashley into a possible contender in Bellator’s heavyweight division.

Much like Lesnar, Lashley was older than most when he started his MMA career. He was in his thirties by the time he stepped into the cage for his first pro fight. But unlike Lesnar, “The Dominator” had no delusions of ending up in the UFC after just a few fights and opted to take the more traditional approach of working his way up through the regional scene. After getting off to a hot start by winning his first four bouts, including a pair against MMA notables Bob Sapp and Jason Guida, Lashley made his first step towards winning a major MMA title when he joined the Strikeforce roster in early 2010. Following a quick finish in his debut for the San Jose-based promotion, Lashley ended up opposite the unheralded Chad Griggs in his second Strikeforce bout. The former WWE superstar suffered defeat for the first time in his MMA career when the doctor was forced to stop the fight in between the second and third rounds. Lashley never fought for the promotion again and ended up spending much of the next few years cutting his teeth in smaller companies like Titan FC and Shark Fights while waiting for a call to move up to a bigger show.

The call finally came earlier this year, and Lashley joined the Viacom family as a member of the Bellator MMA roster. He also joined the Impact roster to continue his pro wrestling career. While his Impact campaign got off to a quick start in March, it wasn’t until Bellator’s 11th season kicked off this fall that Lashley was able to finally step back into an MMA cage again.

Since many fight fans likely hadn’t seen Lashley compete since his loss to Griggs over four years earlier, this was an opportunity for “The Dominator” to prove how much he had improved during his time spent honing his craft in smaller promotions. Matched up against an outgunned Josh Burns, Lashley turned the heat on and looked impressive for most of the bout despite several futile attempts to finish the fight by submission. When he was finally able to secure the tapout midway through the second round, Lashley was clearly tired. He also seemed a bit rusty after spending roughly 10 months inside a wrestling ring instead of a cage, but he pulled out the victory and ensured a successful Bellator debut nonetheless.

Lashley’s second fight in Bellator, which took place just a week ago at Bellator 130, gave fans a lot more insight into how far he could make it in a major promotion’s heavyweight scene. While his opponent, British fighter Karl Etherington, wasn’t exactly a big name, he possessed an undefeated record and had a knack for finishing opponents quickly, making him the most dangerous opponent for Lashley since his loss to James Thompson in the Super Fight League a few years back. It was the perfect opponent to provide Bellator with a measure of exactly how much potential Lashley has within the company’s struggling heavyweight division, and Lashley passed this test with flying colors, scoring a well-timed trip and raining down some thunderous ground-and-pound to hand Etherington the first blemish on a perfect record early in the first round.

Now sitting at 2-0 in the promotion with back-to-back finishes, Lashley is likely going to end up in a fight with major title implications for his next bout. With current Bellator champion Vitaly Minakov rumored to be heading towards retirement soon, the heavyweight title scene could very well blow wide open in the next few months. Due to the lack of recognizable names in the division and the fact that Lashley can effectively promote two shows for Spike TV at once thanks to his Impact wrestling ties, it seems likely that the former Impact champion will end up in either a top contender’s bout or a title fight by this time next year. Sadly, barring a major upset for “The Dominator,” that means that these two wins in Bellator could easily end up serving as the highlight of Lashley’s MMA career once he takes that step up in competition.

By no means is Lashley a bad fighter, but he’s not championship material while fighting in one of the top promotions in the world, and no amount of training over the next year is going to change that. While he’s still relatively young to the sport, the 38-year-old is past his athletic prime. It’s only going to get harder to compete at the highest level in Bellator as he gets older. Things like cardio and conditioning are going to hold him back, and especially since his pro wrestling career forces Lashley to maintain his muscular physique, simply shedding some extra mass isn’t an option in order to help his gas tank. Despite the fact that Lashley is a former NAIA wrestling champion and an all-around gigantic man, the takedown and top control game that should have emerged as his bread and butter has never truly come to fruition. Although Lashley has definitely become a solid fighter over the last six years, he’s never developed a dominant skill, and that’s going to be a problem against the more refined skill sets of other top Bellator heavyweights like Cheick Kongo and Alexander Volkov.

“The Dominator” is 10 times the mixed martial artist he was when he first stepped into the cage in 2008, but he just didn’t have enough time while in his prime to truly start to master the sport and make a legitimate title run. Now in what’s likely the twilight of his career, Lashley’s going to get the opportunities that every fighter strives for, but his skill level just isn’t going to be high enough to allow him to score wins over the next caliber of opponent he’s going to fight.

If he’d have started his MMA career at age 25 instead of age 30, it’s possible that Lashley could have reached the heights of a guy like Lesnar over the course of a longer career. Instead, Lashley’s career has probably hit its peak. Unfortunately for “The Dominator,” the only belt that might end up around his waist in the next year will have “Impact” written across the front, not “Bellator.”