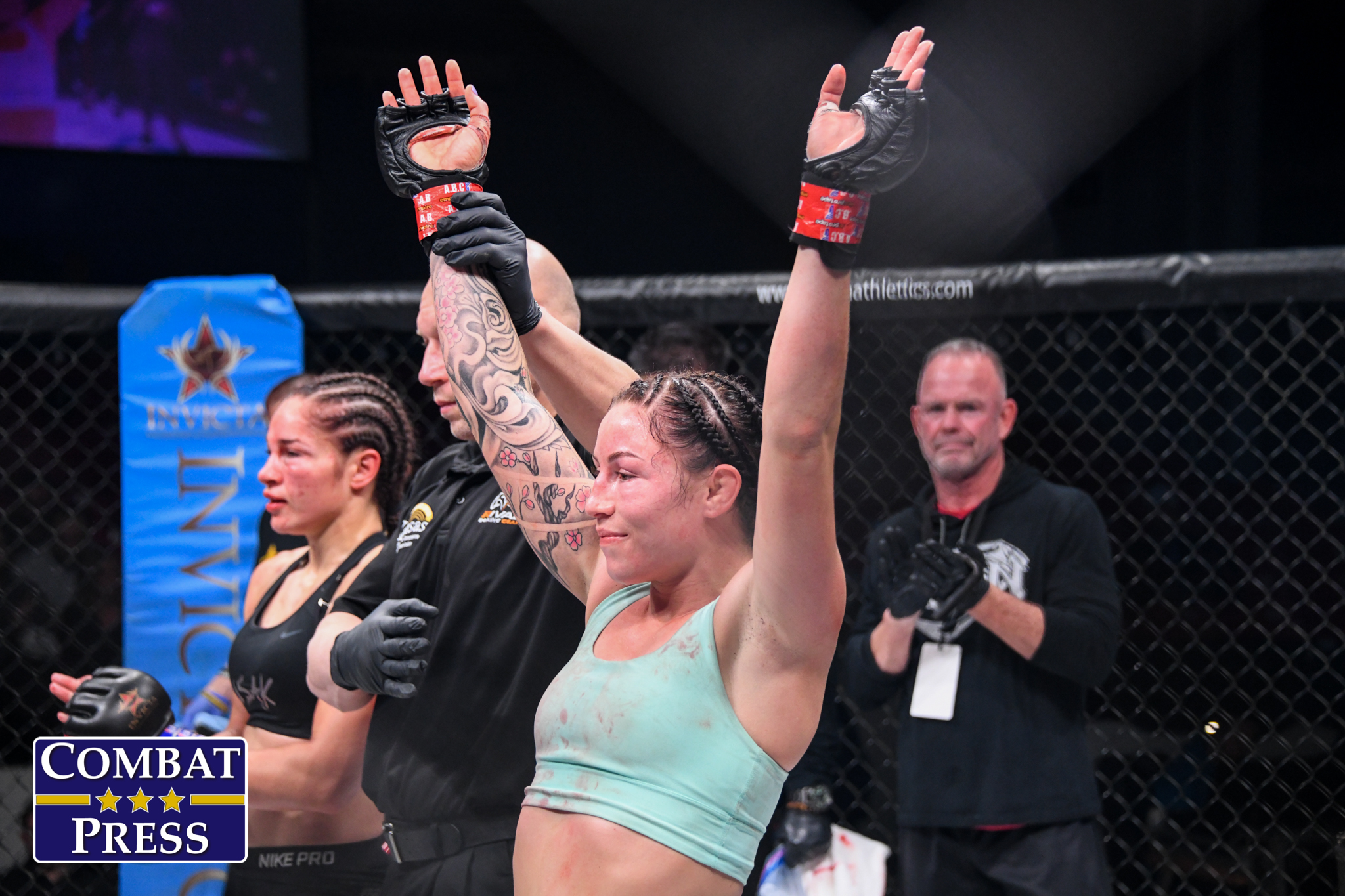 To many, the whole point of the Dana White’s Tuesday Night Contender Series is to usher fighters into the UFC. However, an unusual number of fighters have won in front of the boss and not received a subsequent contract. Mallory Martin is one of those fighters.

Martin’s most recent loss came against current UFC flyweight Maycee Barber in September 2017. Barber came in way over weight for the strawweight affair, and Martin was dealing with a torn ACL. Barber picked up the decision win. In the next 12 months, though, Martin reeled off three wins, all by stoppage, across Invicta FC and the Legacy Fighting Alliance. That landed her in the Contender Series in August with a 4-2 record.

Martin took on the 7-2 Micol di Segni. After three rounds, Martin took the decision nod. However, she was not awarded a contract. She knew it would eventually come, but she figured she would have to pick up another couple wins to stay on the UFC’s radar. Her next fight took place a month ago in Invicta, where she picked up a victory over Cynthia Arceo.

“I had a good performance and everything,” Martin told Combat Press. “I wish I had gotten the finish, but I was happy with my performance. I went back to Colorado and then I took a few days off. I was pretty banged up, and my elbows were sore from the ground-and-pound. Other than that, I was fine, and my body felt fine. I got back to training right away, because my manager said [to] keep the weight low and stay ready.”

Martin received sage advice from her manager that day. Last week, she got the call to replace an injured Livia Renata Souza at UFC on ESPN 7, which takes place Saturday night in Washington, D.C. She was in California with her boyfriend, fellow UFC fighter Deron Winn, in preparation for a trip to Lake Tahoe for Thanksgiving. Those plans were derailed.

“He coaches for the high school team here, and I was watching him coach the wrestling team,” Martin said. “My manager called me up, and said, ‘How much do you weigh?’ I hadn’t checked my weight since I weighed in for my last Invicta fight, so I told him I didn’t know. I checked my weight and called him back, and I was good.

“We had talked about it, and he wasn’t expecting it either. He was saying that we were going to wait and fight again in February or March. I went back to training, sparring and conditioning. I was expecting one more fight and then getting the call. So, getting the call after that is pretty good, and I’m excited about that.”

Martin’s primary gym is Zingano Brazilian Jiu-Jitsu in Broomfield, Colo., but she also does her striking with Kenny Hill at Tao of Boxing, her strength and conditioning at Landow Performance, and sparring with the Elevation Fight Team. When she is in California, she trains at American Kickboxing Academy, which is where she finished up this camp. With the adverse weather in Colorado over Thanksgiving week, she didn’t want her training and travel to get disrupted.

On Saturday evening, Martin meets the 14-1 Virna Jandiroba. The two ladies have fought on the same card in the past. Jandiroba made her UFC debut in April as an undefeated up-and-comer, but she suffered a decision loss to former UFC champ Carla Esparza. This is arguably Martin’s toughest opponent to date.

“She is a black belt, and she has pretty good stand-up,” Martin explained. “She has a good record, but I’ve fought people with good records and [who] had way more fights than me, and I went out there and made it look like I was the more experienced fighter. I’m excited, and I think it will be a chess-match kind of fight. I’m really good on the ground as well. I expect her to shoot in on me, but I’m confident I can outstrike her, and I’m confident I can take her down.”

Martin has come a long way since she fought Barber over two years ago. She was dealing with a lot of issues going into that one, but she took the fight anyway and made it to the final bell against a fighter who has stopped every other opponent and is still undefeated at 8-0.

Now that the ink is dry on Martin’s UFC contract, she is ready to capitalize on this opportunity. Her goal was to make it to the UFC, and now she is there. Her next goal is an Octagon win.

“I’m always exciting, and I like to put on a show. I think there will be a lot of scrambles, and it will be a very high-level and entertaining fight.”